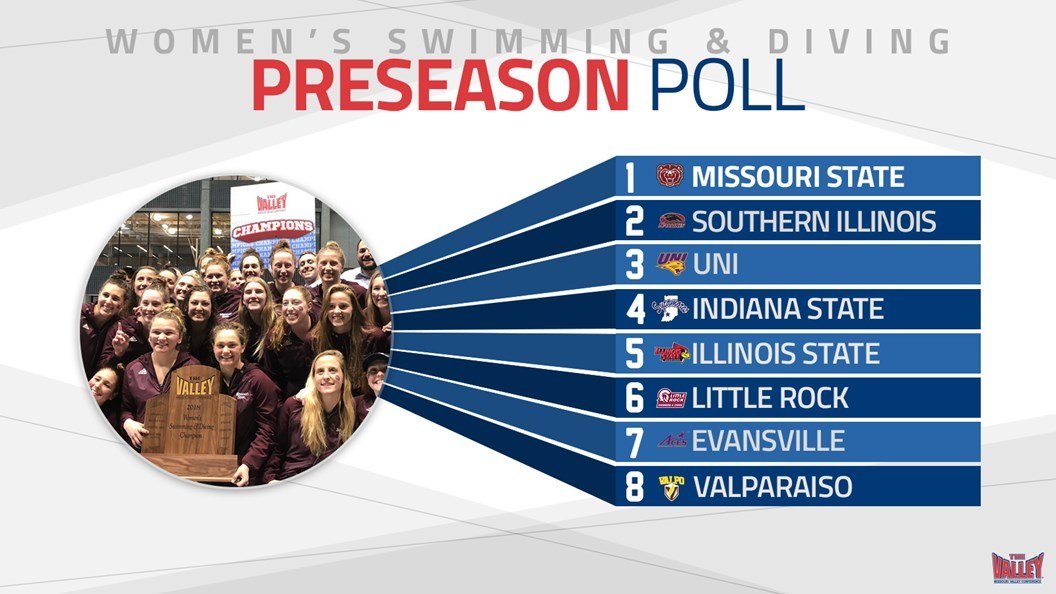 ST. LOUIS – Missouri State has been unanimously selected as the favorite to claim the Missouri Valley Conference women’s swimming and diving title in voting done by the league’s eight head coaches.

Last season, the Bears won the 2018 MVC Swimming and Diving Championships, earning their 14th title since the 2002-03 season. Missouri State, under the leadership of seventh-year head coach Dave Collins,  returns six individuals who earned first-team all MVC honors and six who received honorable mention recognition. Highlighting the Bears returners are Libby Howell, the 2018 MVC Freshman swimmer of the Year and a three-time event winner, and Josie Pearson who earned a trio of top-three finishes.

Southern Illinois came in second with 53 points in this year’s preseason poll. The Salukis, under the veteran leadership of Rick Walker, welcome back 11 total individuals who were on the 2018 All-Conference honors list, including three first team selections. Among the Saluki’s returners is the 2018 MVC Diver of the Year, Baobao Ji along with her twin sister and fellow diver, Beibei Ji.

The University of Northern Iowa filed in at third with 45 points. The Panthers are led by second-year head coach Nick Lakin and will bring back eight All-MVC swimmers from 2018. Katie Taylor, a two time-winner last season leads the returning group. During the championship meet, Taylor set a MVC record in the 400 individual medley with a time of 4:16.87.

Indiana State rounds out the top half of the poll, coming in fourth with 40 points. The Sycamores will be under the guidance of first-year head coach Josh Christensen. Christensen will inherit two first-team All-MVC honorees from 2018, as well as six who earned honorable mention recognition. The Sycamores key returners include last year’s 200 breaststroke champion, Blanca Saez-Illobre, and Marlene Palvu Lewin who placed second in the 200 backstroke.

Illinois State comes in at fifth in the preseason poll with 35 points. The Redbirds are led by fourth year head coach Scott Cameron and will bring back one first-team All-MVC swimmer and four honorable mention honorees. Jensen Keck will highlight the returning class after posting a pair of top three finishes in the MVC championship meet last season.

Little Rock tallied 25 points in the poll to slide into sixth place. The Trojans are led by Amy Burgess in her 11th year as head coach of the program. Burgess will bring back a pair of honorable mention All-MVC honorees from 2018, Laura Ruiz Astorga and Imre van Huyssteen.

Coming in at seventh is the University of Evansville. The Purple Aces will have a new leader at the helm, as Brent Noble took the reins this September. The team features a lot of young faces, with 20 of the 34 members of the roster listed as freshmen or sophomores.

Closing out the poll is Valparaiso with the remaining eight points. The Crusaders are led by Miriam McGeath, who was hired in December 2017. The program also has a lot of youth on the roster, with 11 freshmen and sophomores and just four upperclassmen.