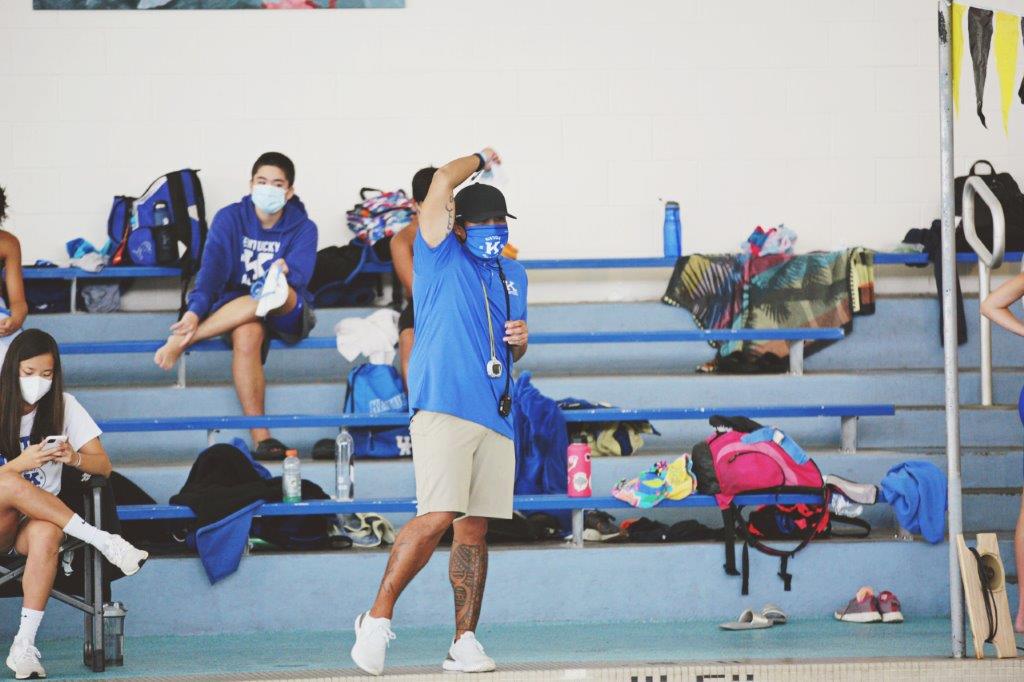 Joey Gracia discusses his mid-pandemic move to Kentucky Aquatics as their new head coach and "starting from scratch" with his athletes post-quarantine. Current photo via Moon Ko

#1 class of 2022 recruit Baylor Nelson (above) and other SwimMac teammates, including Grace Rainey and Caleb Maldari, competed at a suited SwimMac only meet.

Gracia stepped into the position vacated by former head coach Chris Fugmann. James Washbish, who was occupying the role on an interim basis, is returning to his previous position as an assistant with the club.

Gracia has been coaching in Southern California since 2011. First, at GoldenWest swim club and then at Mission Viejo alongside mentor Mark Schubert since 2016. In a phone interview with SwimSwam Gracia described his experience working with Schubert.

“You gotta be on your toes,” he laughed. “It was a lot of fun because I was able to learn a lot from him, both on the deck and off the deck which was great. He’s a big mentor of mine, so nothing but respect for him.”

At Mission Viejo Gracia was also the 13-14 division director and head senior group coach. He worked with the Olympic Trial group and Futures qualifiers.

The pandemic has added some unique challenges to Gracia’s move cross-country. He explained his approach to returning to training and competing during the coronavirus restart, taking into consideration the 4-month long break athletes were forced to take from training during quarantine.

“We took it step by step,” he said. “We didn’t rush anything, we didn’t throw big main sets at them yet. The first week..we broke down freestyle…focusing on head position and body line…”

“I think it was important for them to understand from the beginning that we were…being able to get into a new program, a new training program, new verbage for them…it was all about breaking things down for them and starting from scratch.”

Kentucky Aquatics normally trains out of the University of Kentucky’s indoor pool. However, due to pandemic pol closures, the team of 112 athletes was forced to find new training facilities. Currently, they are practicing out of Lexington Country Club, an 8 lane 25 yard pool, and Falling Springs, a 6 lane 25 meter pool.

Both pools are heated but they are outdoors, which adds another obstacle for the team as they enter the winter months. Gracia explained the benefits of just having a pool, despite the size.

In addition to pool closures, social distancing standards have caused the team to stagger the times that the training groups practice.

Gracia said, “The hardest part has been, for a lot of these senior athletes, is the turn around that they’ve had to do” when it comes to practice times. To ensure safety, Kentucky Aquatics senior athletes are training 7:15-9:15pm, and then returning to the pool deck the next day at 5am.

Luckily, the 14 & Under Kentucky Aquatics swimmers were able to find a silver lining over the weekend at their intrasquad meet. Full results are posted on meet mobile under “KYA Quarantine Classic.”

Gracia, the coaching staff, and meet officials worked together to create a safe environment for the athletes. The meet was conducted in four sessions over two days, with athletes complying to social distancing and mask-wearing right up until they stepped onto the blocks. Athletes brought a small tupperware to place their mask in while they raced and parents watched the meet through a livestream.

Instead of focusing on times, the meet was intended to get the athletes back on the blocks for fun. Gracia said, “That’s…the fun part of it all is just to get up on a block and then think ‘ok I gotta give my absolute best effort right now.’”

Gracia aims to coach Kentucky Aquatics swimmers to the state and national levels where they have been successful before. In the past, Kentucky Aquatics’ Bailey Bonnett finished 2nd at the 2019 US Nationals. In 2018, Bridgette Alexander placed 4th in the 100 back at Winter Nationals and Asia Seidt finished 7th in the 200 fly at Nationals. Seidt is also a conference nominee for the 2020 NCAA woman of the year award.

Gracia explained, “My vision for Kentucky Aquatics is to compete at its highest level and achieve at the state level or at the national level… Nationals, seniors, Olympic Trials is what I’m hoping for. We have a good group of athletes here, a great foundation of athletes which is awesome. I think the future is here for Kentucky swimming, but I do want to, you know, challenge them to see more than Kentucky swimming.”

What happened to Chris Fugmann? And who’s this James Washbish fella?

And she still swims for Clovis Swim Club.

Congrats Joey. Dude was great when we swam together. So awesome to see him progress. If he is even half as positive as he was as a swimmer, I have no doubt he will crush it as a coach

Even behind the mask Coach Joey’s energy and positivity has been infectious! Excited for the future of KYA!

CONGRATS JOEY!!! Such an amazing guy wish you the best.

Great story, but Asia Seidt swam for Lakeside Seahawks in Louisville and not KY Aquatics.

From 5/18-1/20 Shows she swam USA meets under KYA. Which normally trains at same facility as UK. Up until Covid UK swimmers would mainly swim non College meets under KYA. Her meet in June was back under Lakeside. Which might be because UK was still shut down and she is from Louisville area.

We’re all so proud of you Joey! You’re an inspiration and a blessing! Hugs from your Fam in CA!