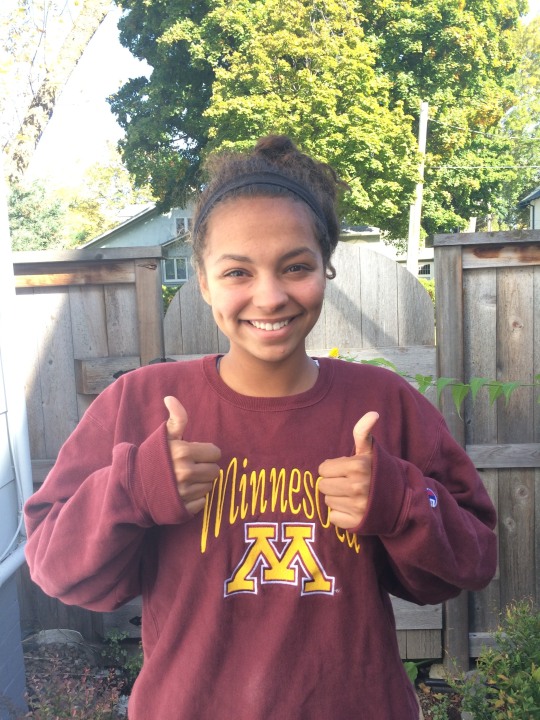 Rachel Munson of Shorewood Swim Club has given her verbal accord to the University of Minnesota Golden Gophers for the...

Rachel Munson of Shorewood Swim Club has given her verbal accord to the University of Minnesota Golden Gophers for the 2015-16 season. Munson will cross the border from her home state of Wisconsin, where she is state record-holder and 2016 Olympic Trials qualifier in the 100m breast (1:10.18). Her top times are:

Munson has improved fairly dramatically over her high school career. At the 2012 Wisconsin High School Division 2 state meet Munson was 2:06 in the 200 IM for third place, and won the 100 breast with a state record of 1:01.37. As a freshman she was seventh with 2:10 and fifth with 1:05.

Minnesota only placed two breaststrokers (including B1G champion in the 100 and 200, Kierra Smith) in the three finals at the 2014 conference championships, and only one in the 200. Smith will be a senior when Munson is a freshman; the Golden Gophers will count on Munson, and its current stable of breaststrokers, to keep them out front of their B1G rivals.

One reason for Minnesota fans to be hopeful is that she hasn’t even incorporated a full dolphin kick into her stroke yet. “I don’t do a dolphin kick because my pullouts aren’t exactly a strength of mine, and it’s simpler to improve them now without the complication of the dolphin kick.”