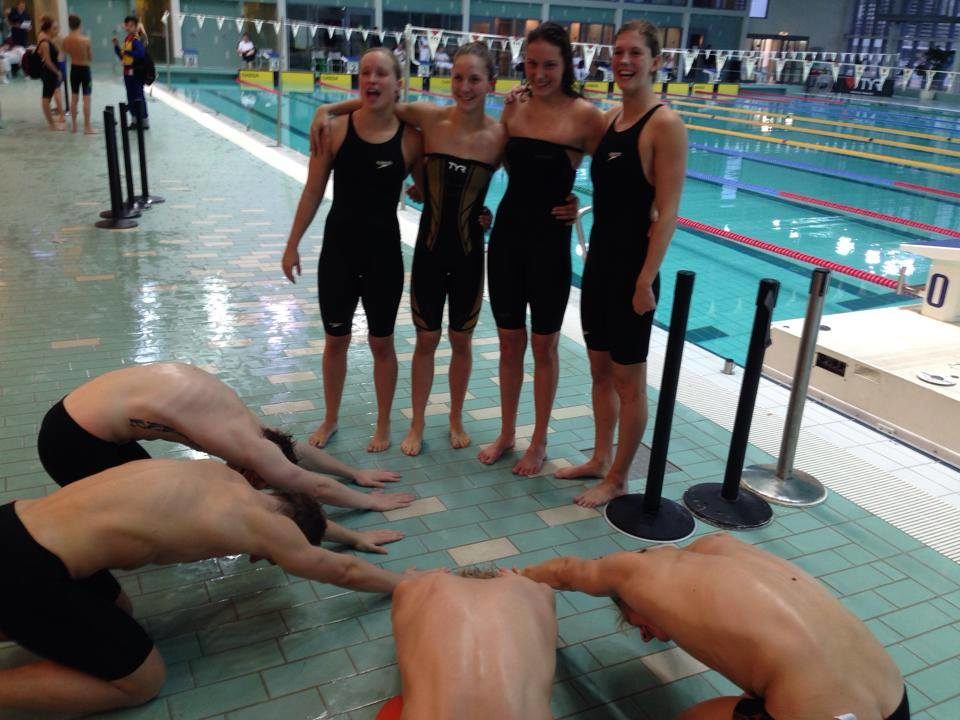 Heiko Gigler grabbed two golds so far at the Austrian National Championships over the weekend, with more swims to come from Graz.

Catalonia, among the different regional governing bodies for the sport, has established a special protocol that would allow for a safe return to competition.

In a Supersuit, Ari-Pekka Liukkonen Goes Under Finnish 50 Fly Record

Danish 17-year old Mie Nielsen left her fans disappointed when she missed the World Championships this summer, especially with the rest of the team swimming so well, with a knee injury that cost her most of the season.

She will have, then, thrilled her fans with the way she announced her return from that injury.

She shaved a slim .02 seconds off of her own record, that was done in March of 2012, but the margin makes no matter. This is the first swim we’ve seen from her since April, and for her to go a best time in the swim speaks volumes of her progress since the injury.

According to her official Facebook page, the group from Aalborg Swim Club also broke a Danish National Record (for clubs) with a 1:50.61 in the 200 short course meters medley relay:

Happy to see Miss Nielsen healthy and already back at her best.
Very promising before the European championships at home.

Good news indeed, and another shiny suit record wiped from the Danish record book 🙂 Let’s hope the problem has been cured long term as we have high hopes for Mie.

And about Danish swimming, very interesting interview of Lotte Friis in a Danish newspaper.
I have read the translation on swimming world. Here’s the article. Work your Danish! 🙂
http://www.bt.dk/svoemning/ol-medaljer-paa-deltid-droemmer-om-tv-karriere

This is good news to the prospects for Danish relay team. They may win, or even be a favourite to win, the medley relay at the European l/c Championships in Berlin, 2014.

I’m hoping for a good tussle with Russia at the Euro SC champs, the 4×50 medley SCM Danish national record is still a shiny suit one which needs to go.

With Mie Nielsen, RMP, Jeanette Ottesen and Pernille Blume, I don’t see how the Danish medley relay can lose, especially at home. It’s almost a dream team!
I predict fireworks for Danish swimming in Herning.
Mie Nielsen for the 100 back gold medal
RMP for the 200 breast gold medal with a new world record
Jeanette Ottesen for the 50 fly gold medal. And why not 50 free and 100 fly too?
Women’s 4X50 medley relay with the gold medal.
Lotte Friis for the 800 free gold medal with a new world record
Have I forgotten something?

Other question.
I have just watched the Herning’s schedule and the only relays are 4X50.
At the SCM world championships the relays are 4X100 and 4X200.
Why this difference?

I agree, it is odd that the relay distances are different. Being SCM you’d think they would swim 4x50s at worlds. Perhaps it’s because LEN recognised 4×50 events before FINA , who knows?

I prefer LEN’s way to have different relay schedules at short-couse and long-course championships. Especially a 4×200-metres relay doesn’t fit at all in a short-course pool. As for 4×100-metres relays they will be always overshadowed by their long-course counterparts. From this point of view I cannot see the rationale for having the same relays at both championships.

Let’s also remember the history of the European Short Course championships. The meet was born as European Sprint Swimming Championships in 1991, which probably explains the status of short relays on the current schedule.