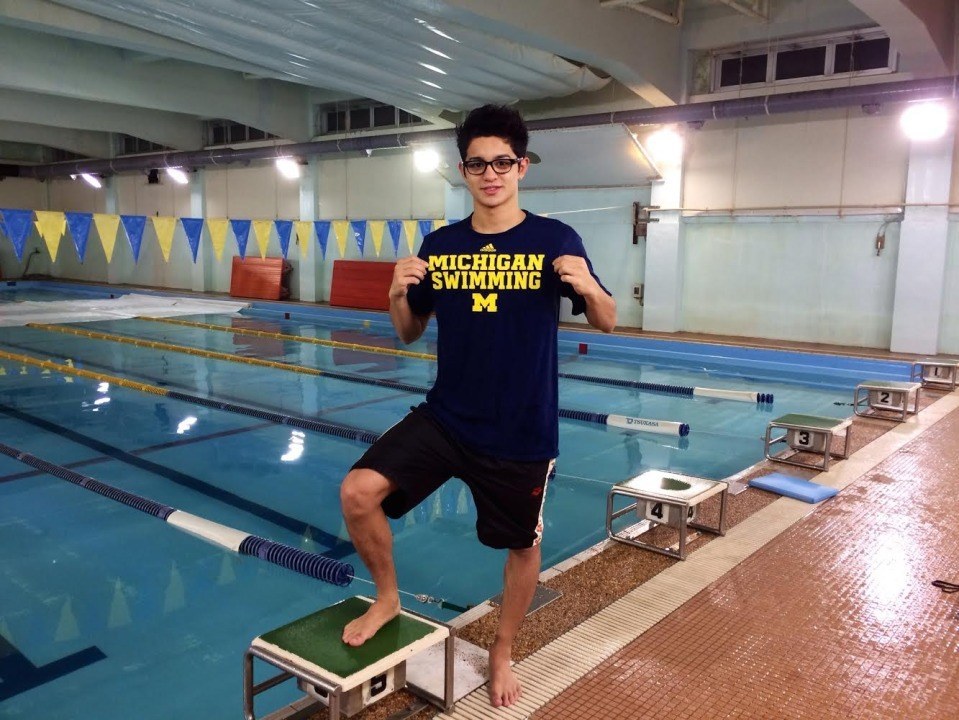 Mike Bottom has dipped into a familiar recruiting pool at the St. Mary’s International School in Tokyo, Japan with a... Current photo via Mokhtar Al-Yamani

Mike Bottom has dipped into a familiar recruiting pool at the St. Mary’s International School in Tokyo, Japan with a verbal commitment from Mokhtar Al-Yamani.

Since that meet, Al-Yamani has drastically improved in long course, which means his short course times should get better too.

According to his personal website, Al-Yamani’s best times in long course meters are:

And in short course meters:

Editor’s note: times were updated in the 200 LCM and SCM frees since initial posting.

Al-Yamani told SwimSwam this week he’s currently working to broaden his freestyling range, hoping to become a threat in mid-distances as well as sprint events. He passed along a few of his short-course meters times, which include a 3:53.06 in the 400, a 24.65 in the 50 fly and a 56.09 in the 100 fly.

He’s now the 4th Wolverine swimmer from St. Mary’s International School, after current senior Bruno Ortiz, as well as graduated swimmers Ryutaro Kamiya and Miguel Ortiz. All three of those swimmers were multiple-time NCAA Championship qualifiers for the Wolverines.

“I am very excited to be a part of the University of Michigan, as I believe their combination of both academic and athletic excellence will be a perfect fit for me,” Al-Yamani told SwimSwam. “The coaches were very warm-welcoming, and I know that they will help me improve to the best of my ability.  The facilities are unlike any universities I have seen in Japan, and I am proud to say I will be a Wolverine starting next year.”

Al-Yamani, who is the standard age as compared to an American high school freshman, claims his nationality as a combination of Japanese, Yemeni, and American.

Hi Coach – can you send us results for that race or show us where those results are? It’s tough to verify times for international swimmers, but we want to make sure it’s right before we update the article.

Thanks Coach, will update above!