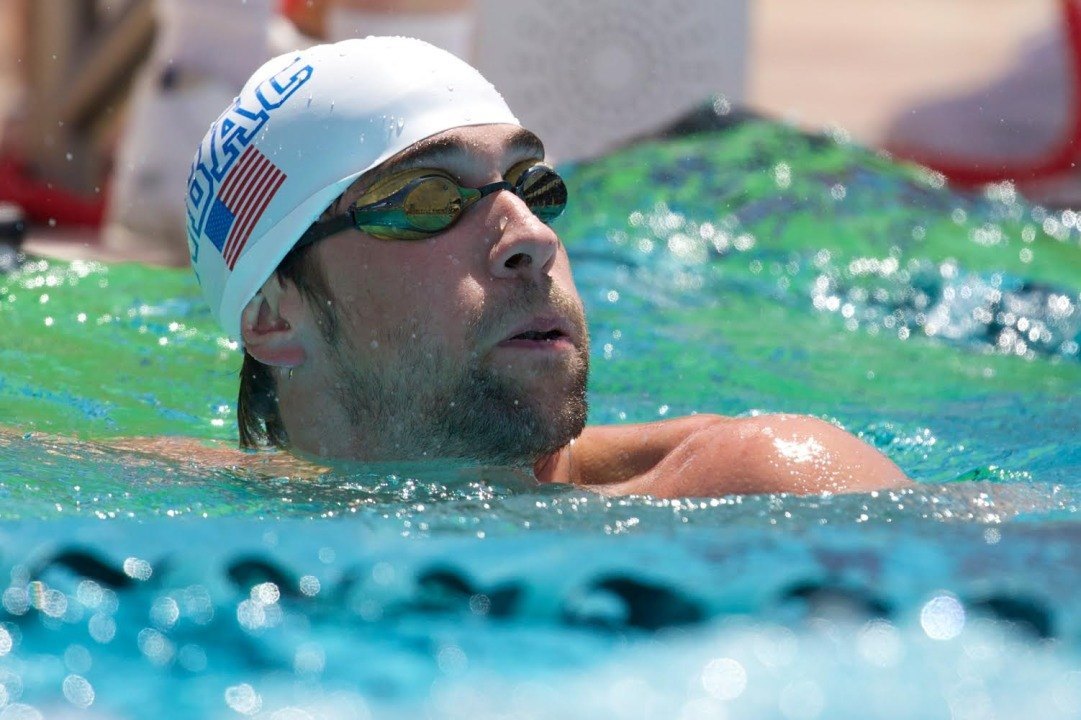 This will be Phelps’ first competition since his suspension, sustained after a DUI last fall. The suspension ended earlier this week, and Phelps has long targeted Mesa as his comeback meet. Fittingly, this meet was also his first meet back from retirement last season.

While his 2014 Mesa meet was a very light event lineup, featuring just the 50 and 100 fly, Phelps will take on a much more aggressive lineup this year. He’s entered in 5 different races.

Though Phelps could (and probably will) scratch at least one of these events, his entries at least suggest events Phelps would consider racing during the latter half of his career.

The 400 free is probably the most surprising event on Phelps schedule. According to USA Swimming, Phelps hasn’t competed in the race since 2009. It’s very possible he’ll scratch out, but it wouldn’t be completely against coach Bob Bowman‘s philosophy to have Phelps swim the race as a training event to improve his 100 or 200, where he stands a shot to make Olympic relays.

Outside of Phelps, almost all of the big names in American swimming will be here. Lochte will swim an almost identical schedule to Phelps (including that 400 free), but will also enter the 200 free. Series points leader Conor Dwyer will take on the 200 free, 400 IM, 400 free, 200 IM and 100 free.

Distance phenom Katie Ledecky is set to swim almost every freestyling distance: the 100, 200, 400, 800 and 1500 are on her schedule, plus the 400 IM, which is continually teased as a potential breakout event for Ledecky, though her focus is obviously on the freestyle races.

Women’s points leader Elizabeth Beisel is entered in the 200 free, 400 IM, 200 fly, 100 back, 400 free, 200 IM, 200 back and 800 free. She’ll have to drop at least one of those to get under the meet’s limit of 7 total events – the longer freestyle events seem likely possibilities. Beisel tends to swim those events for points and prize money when the meets are weaker in the distances, but with Ledecky and Lotte Friis both competing, Beisel’s best bet to maintain her points lead might be elsewhere.

Also entered is Hugary’s Katinka Hosszu, though there are no clues what she’ll end up swimming. Hosszu is entered in 14 different races. She’ll have to cut that number in half to get under the limit.

This is far from an exhaustive list (these psych sheets are absolutely loaded), but here’s a look at where some of the biggest names are entered:

Now, the 200 free scenario is widely open and Phelps, in my opinion, could rethink his proposal to not swim the 200 free individually any more, and train for 200 free again (his entry in 400 free at Mesa could suggest something about that).
Yes, I know that 100 fly and 200 im are the obvious prime options for Rio2016, and that 2 individual races are more than enough for a swimmer at 31 years of age, but we know that Phelps has always had great ambitions with his schedule, also with the risk to be over-ambitious.
Anyway, from a technical point of view, absolutely more chances for Phelps (also at 31 years of age) to succeed in… Read more »

maybe Phelps is afraid to race Yannick…after training with him for a year, he knows he can’t beat him? just a thought. not sure where it falls on the olympic order of events vs his other events

Nope. The word “afraid” does not exist in Michael Phelps’ dictionary. He’s proven in the past that he’s not afraid to challenge the best in the world. Remember his 200 free at Athens 2004 Olympics? He’s already a fearless kid back then and I kinda believe he was born that way (+ talent, hard work, dedication) which made who he is today – The Greatest of All Time. There’s always a reason behind each story that you & I know nothing about — And whether he chooses to swim the 200 free or not, it’s up to him and his coach’s decision. We’ll just have to wait & see. Phelps is definitely NOT afraid of racing Yannick Agnel.

Question: why is it preferable for Phelps to puruse 100 free rather than 200 free? Not for Mesa, but in general? From whatever I have seen he can’t reallly challenge the top 100 freestylers, but if his endurance is sufficient he seems more likely to my untrained eye to be able to catch up to the field in 200 free. And he swims both relays, so it isn’t just for that. Is it because it helps with the 200 IM?

This post is for swim history geeks like myself and for Phellow Phelps Phans (which I think We Love Phelps might be, but not really sure from her posts):

Paul and Thompson above are exactly correct and A Swim Fan, Lane Four, et al, are wrong; it’s just a matter of only being able to focus on so many events at a time. Doing the others would have required less attention to his meat and potatoes events, which is… Read more »

He might just use the 400 as a chance to swim a 50 … or another chance at race pace 100. Sprint out, check his split, and just cruise the rest of the race.

whoa…my friends & i were so lucky that we’ve received all our tix yesterday…esp tix for MP’s events!!! 😀
looking forward to the 100 fly with Phelps vs. Shields vs. Phillips vs. Lochte vs. Godsoe
100 back with Grevers Phelps Vyatchanin Plummer Thoman and others. it’s going to be a great swim meet for all swim fans out there…no doubt.

that 100 fly is seriously packed up !!!! as well as that 100 back !! Wowwwww ; Willl be great to watch all that next week .
As Bobo mentioned , will be great to see some NCAA champs in action in LC : Manuel , Greishop , etc …. and of course see how Schmitty manoeuvres her racing in LC .

I find it interesting all the focus on MP entering the 400. I think he’s trying different events in training and seeing what he can do and how it will affect his training for his core events – 100 fly, 200 IM. What I haven’t seen mentioned is how much better his best SCY time is in the 500 – 4:10 versus his 3:46.73 in LCM 400. Interesting since his LCM times are usually more impressive than his SCY. I’m just excited that there is finally a semi-major LCM meet where the US will have a chance to post some competitive times after college season has gone by.