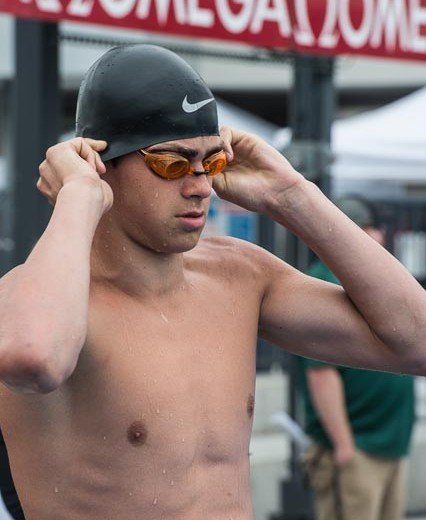 14-year old phenom Michael Andrew has broken yet another National Age Group Record, taking down the 100 yard breaststroke at the...

Andrew swam a 54.04 to win the final at that meet, which broke his 54.80 set, which means that in the last few months, he’s now dropped the National Age Group Record by well over two seconds – Tanner Kurz had held the mark at 56.36 before Andrew broke it.

Editor’s note: Reece Whitley has also since been under the old record at just 13 years old too.

Sautéed crow. Roasted crow. Deep fried crow. Barbecued crow. Big huge heaping helpings of crow going down the gullet. A lot of folks are gonna be putting on the pounds with this steady diet!

Unreal chunks of time he is slashing from these records. I keep having to adjust which I think is his best event. Right now I think it’s the 100 breast, but ask me again tomorrow!

He goes to every national meet and he’s 14. Does he attend school?

I believe he does an online high school curriculum through Liberty University.

This is correct. He’s taking online classes, similarly to what most of the NBAC kids do.

Although I’m not good in estimating how fast/slow SCY times are, it’s easy to see that this is a stunning time for a 14 yo. I mean, it’s only around 3 seconds and change slower than Cordes’ American record.

And yes, it does look like breast is his best and/or natural stroke/event.

😆 😆 😆 😆
Amazing!
Michael Andrew didn’t like that I wrote a few days ago he would probably lose his 100 breast NAG record next week or next December so he destroyed it to be sure it wouldn’t happen. 😆
From 54.80 to 54.04! 😯
Now he hasn’t to be worried.
His record will not be broken next week by Reece Whitley.
It should last at least until December.

Yikes. I may need a bigger font of SMASH to properly express how SMASHy this one is.