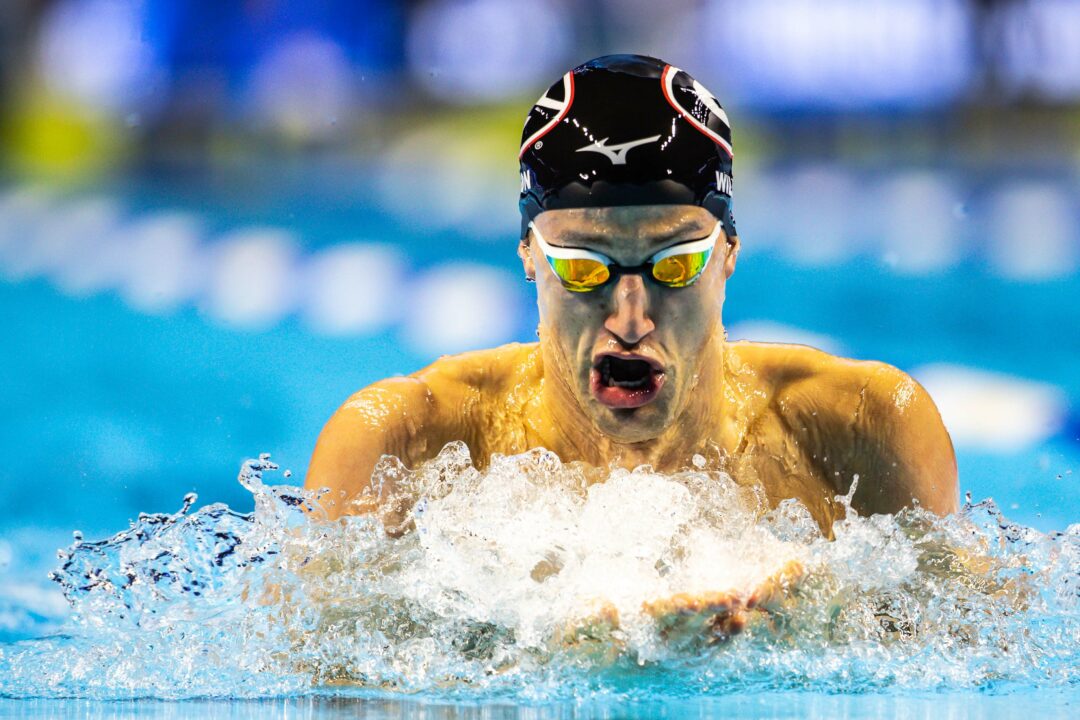 Neither man on track to represent the US in the 100 breast in Tokyo swam for a D1 school, something that doesn't appear to have happened for decades.

There’s no doubt that, historically, the NCAA has been the lifeblood of American Olympic swimming success, and for the part most, that lifeblood has come from Division I colleges and universities. For decades, Olympic rosters have been dotted with swimmers who studied and trained at schools like Cal, Florida, Georgia, Michigan, Stanford, Texas, and plenty of others. And not just American Olympic rosters. Swimmers from all over the world come to the United States to train and compete, and many of them end up representing their own countries in the Olympics, the biggest stage in swimming.

Tonight, though, we saw not just one, but two exceptions to that rule of thumb take the top two spots in the men’s 100 breast, and with that, qualifying for the US Olympic team.

First up – Michael Andrew. He’s been making headlines since he was an adolescent breaking national age group records with reckless abandon. Early on, Michael and his family were known for taking a different approach, as he was coached by his father, Peter Andrew, in a backyard pool, and they went all-in on Ultra Short Race Pace Training, eschewing the high yardage approach that swimmers are known for.

Then, he and his family made the controversial choice for him to turn professional at the of 14, accepting the money that comes with endorsements and deciding before he’d started high school that he’d be forgoing college swimming. That decision drew a fair share of criticism, especially since Michael Phelps had already made an Olympic team and set a world record before he turned pro at the age of 15, whereas Andrew hadn’t come close yet to that kind of prominence on the world stage.

In the years since then, it occasionally looked like Andrew might have eventually had some second thoughts about forgoing college competition and the camaraderie that comes with training with a full team, although he insisted that he believed he was on the right path. The success was there — national age group records, world junior titles, short course world titles, and national championships, although perhaps not at the level he may have hoped or fans might’ve expected in a sport where, for better or worse, most consider the ultimate measure of success an individual Olympic gold.

Tonight, whatever doubts he may have had, and undoubtedly the doubts of many swims fans who wondered if he and his family knew what they were doing, were likely settled when he got his hand on the wall first in the 100 breast, guaranteeing his spot on the U.S. Olympic team at the age of 22, almost eight years to the day after he announced he was going pro.

A scant 0.01s behind Michael Andrew was another man who’s taken an unusual path to the Olympics in terms of college swimming, and that’s Andrew Wilson. The 27 year-old was only 59 seconds in the 100 yard breaststroke coming out of high school, a time that wouldn’t warrant serious consideration at most major college programs. Instead, Wilson matriculated at D3 powerhouse Emory, and quickly went on a roll, dropping to 55.44 as a freshman, then 54.36 as a sophomore, then 51.72 as junior, setting the D3 record.

At that point, his career took another twist, as he redshirted for the 2015-2016 season and trained with the University of Texas, one of those D1 schools known for pumping out Olympian after Olympian under legendary head coach Eddie Reese. Wilson came up just short of making the Olympic Team in 2016, finishing 5th and 4th in the 100 and 200 breast. He then returned to Emory for his senior year, once again demolishing the D3 record.

The twist and turns of Wilson’s have continued, as he’s been training once again with a more traditional program, the University of Georgia pro group, and tonight, he’s put himself in a position to make history. While 2nd-place finishers aren’t officially named to the USA Olympic Team until it’s definite that there is enough roster space, it’s virtually guaranteed, and when that happens, Wilson will be the first D3 US swimming Olympian.

Does the fact that Michael Andrew and Andrew Wilson are both about to make an Olympic team without having competed for a D1 school mean we’re heading for any sort of seismic shift in the college swimming landscape? Probably not. But with an uncertain future for D1 college swimming, especially in the wake of the pandemic and discussions about what ramifications changes in the NCAA’s Name Image Likeness policies or paying student-athletes may have for D1 Olympic sports, it’s definitely a great reminder that, while there’s a reason popular paths are popular, sometimes the roads less traveled can get you where you want to go, too.

M.A. is lucky it was not a 102 meter breastroke. Nonetheless, congrats to him.

They’re actually time trialing that, right before the men’s 400 free

one of those odd comments – so many bring odd ones – it makes the OT what they are on Swimswam since 2010 .

Congratulations to both young men. You are an Olympian!

Very refreshing stories. I think the broadening of the paths to greatness as of late only helps our sport.

Diversity & a bunch of unexpected breakthroughs is what makes their Journeys so valuable and exciting – for the fans and nerds like us , its like ” Jeahhhhhhhhhh , loving these unique stories “

Good news: MA showed great poise at the end, lengthening his penultimate stroke to hit the finish under pressure.

Bad news: he totally overswam prelims and semis, and made a senseless decision to swim two hopeless 100s Back today. That’ll hurt his chances in the 50 and the IM. And it raises serious questions about his team’s judgment. If he manages to beat Wilson in Tokyo, will it be safe to put him on the medley relay at the end of a long Olympic meet?

I think your comment was spot on about judgement.

Also, when Rowdy said he was “used to doubles” and “he does this all the time” during the backstroke I was annoyed. I feel like any fan of MA(which I am) knows he struggles with multiple swims in a session. We don’t need people to try and be like Phelps.

Lochte also was pretty good , during a short period that is , on doubles and multiple races within a few days .

It’s easy to skip college when you’re family is so incredibly wealthy. 😉

Haha. Are you trying to get a job writing for swimswam?

he is just repeating what is unnecessary about MA’s beautiful road towards the Olympics .

We have to take the hat off to Michael Andrew and his family.
They could choose to represent South Africa, but they risked it and try to represent arguably the best and toughest swimming team one could represent, whilst dealing with everyone criticizing their methods and choices.
Congratulations, you deserve it!

best comment i have read in a while about Michael’s Path & Family support quality . Spot on SharkSpeed

I remain hopeful that proper NLI legislation would simply result in kids like Michael Andrew not needing to decide at 14 if they wish to go to college or not.