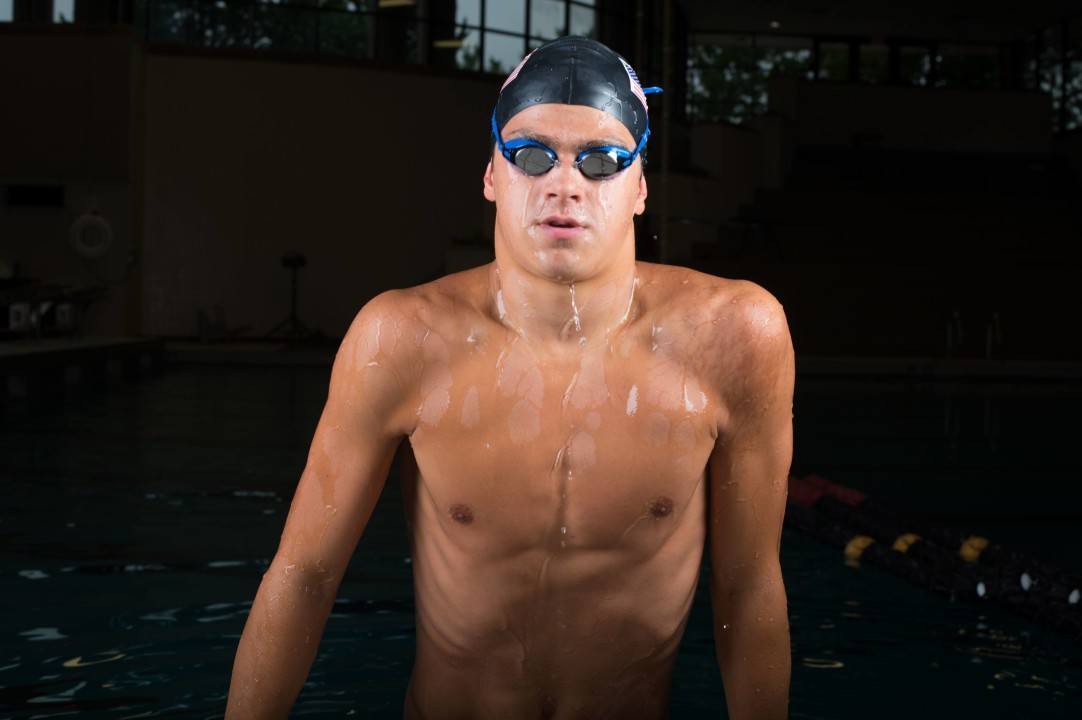 Michael Andrew of Team USA is expected to compete in three individual finals and one semi-final, and could possibly swim a leg on USA's mixed medley relay tonight in Singapore. Stock photo via Mike Lewis/Ola Vista Photography

It’s only Day 2 of 2015 FINA World Junior Championships in Singapore and already USA’s Michael Andrew is facing a grueling schedule. Entered in a total of eight individual events (50m free, 50m back, 100m back, 50m breast, 100m breast, 50m fly, 100m fly, and 200m IM), he finds himself competing in all four of the most difficult, over a period of 2 hours and 6 minutes, on Wednesday night.

While Andrew’s training method lends itself to consistency from prelims to finals, and from day to day throughout a meet, he has never been put to the test quite like this before. Andrew will be trying to win gold medals in the 100 back (where he is seeded third), 100 breast (seeded second), and 200 IM (seeded first). In between he has a tough 100 fly semi-final, in which he qualified sixth, .71 behind top seeded Daniil Pakhomov of Russia, and .62 away from the dreaded ninth place.

Andrew is the favorite in the 200 IM, having qualified first with a margin of .64 with the only sub-2:00 swim out of prelims. He came within .42 of the meet record this morning, and within .02 of the U.S. National Age Group Record. Yet this will be his fourth event tonight. He will have very little wiggle room with the 2:00.50 qualifying time put up by Australia’s Clyde Lewis in heats. Spain’s Hugo Gonzalez wasn’t all that far behind with his 2:01.88, as well.

The likelihood of the mixed medley relay being his fifth event will depend on Andrew’s ability to recover after each of his previous races. While it is true that Team USA has a deep bench, it is still within the realm of possibility that the coaching staff call up Andrew for a leg in the final.

With or without the medley relay, Michael Andrew has a challenging evening ahead.

It didn’t work out at all. Next time they need to use some common sense with his schedule.

Tough with that 200 IM last. Though kind of a Catch-22, if it were first he might have won that but that’s the most taxing race out of the ones he did, so it may have hurt later events even more. Who knows.

It wasn’t a good night results wise, but I applaud him for trying it and it’s better to find that out here than at trials. If they want to continue with a multi-event schedule like this they now know that something needs to change with the training and that maybe 2 races per session is more realistic.

showing off that USRPT ‘stamina’

Did he medal with that split? No. So it doesn’t matter.

Seems like he maybe needs to have a little more respect for the Level of competition he is at. Whilst some might argue it was brave, it my opinion having a smaller focus might have won him a medal or two. Not even the G.O.A.T would have attempted this sort of scheduale as a Junior and he was from a program that focused on aerobic capacity as base work.

His fathers eyes were full of medals, but his self fulfilling ‘Ultra Short’ prophecy has failed…