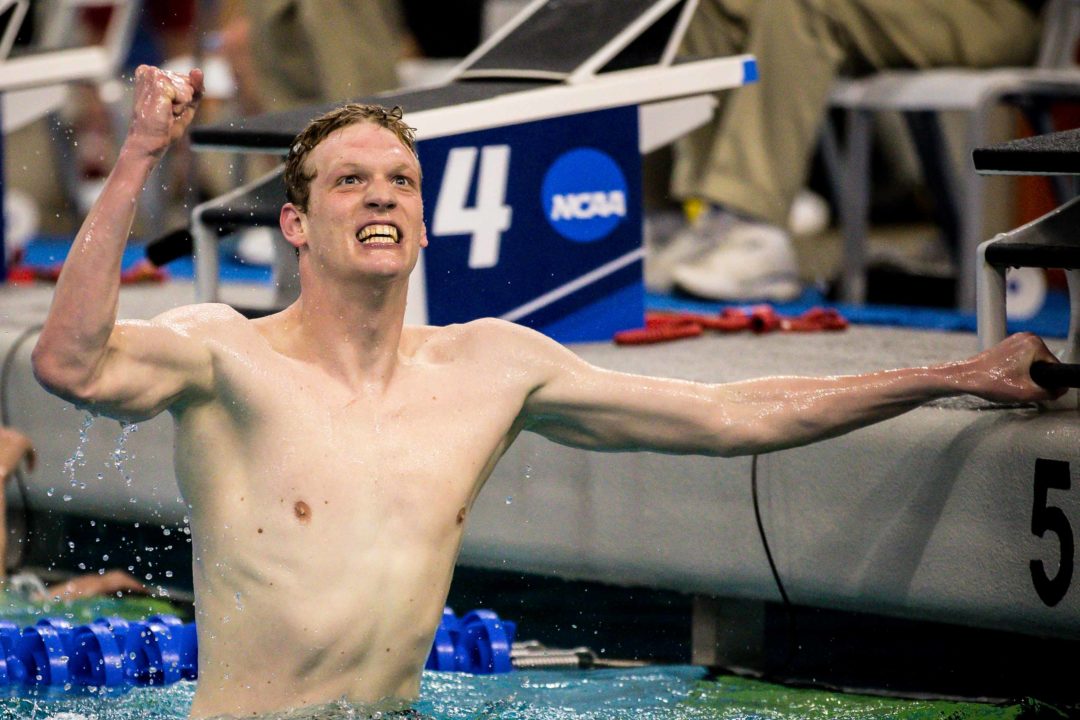 Looking back at four years, three NCAA meets and one set of NCAA psych sheets, we re-score the 2016 recruiting classes by school. Archive photo via Jack Spitser/Spitser Photography

At the time of ranking this class, we noted the incredible improvement curve on Dean Farris, and boy did that turn out to be a harbinger of things to come. Farris still has one year of eligibility left, and Harvard would have been much higher than 30th if he had swum this year.

Ted Schubert had scored small amounts as a sophomore and junior, but was set to blow up with 28 psych sheet points this year. Joe Clark also scored in two seasons.

Cameron Craig was a standout with 14 freshman points, but faded down to scoring nothing as a junior and then transferring out to Ohio State where he didn’t compete this postseason. Zachary Poti had an opposite trajectory, going from zero freshman points to 17 junior points and projected to 30 as a senior.

The distance star Abbott never really panned out in the NCAA, though he was seeded to score his first two points as a senior. Matthew Garcia, though, managed to score one as a junior.

A small class, but a solid one for Georgia. Javier Acevedo led with 45 points in three seasons, and he redshirted this season and could return down the road to add to that total. Walker Higgins scored 27 points across two scoring seasons. Forde hadn’t scored yet, but projected to score as a senior.

Mario Koenigsperger scored 4 as a junior, and could still return after redshirting this year. Jurek ultimately went without an NCAA invite and never bettered his high school best times in butterfly or freestyle.

Top-tier recruit Brocato also went without an NCAA invite and didn’t see his sprint free times improve in college, though his fly did get faster. The transfers Merrilees and Emslie also didn’t yield points for the Tar Heels, who struggled over this four-year period.

Vazaios joined with this group, but we actually classified him with the 2015 group we reviewed last year. The big scorer was Coleman Stewart, who blew up and scored 86 points over three years for the #3 rank in the entire class. Jack McIntyre also scored six points last year.

Top recruit Maxime Rooney had a bit of a slow start, scoring 13 as a freshman but missing scoring as a sophomore. His junior year bounced back some (15 points) before he transferred out to Texas. Rooney was in line to be a massive senior scorer, though it wouldn’t have counted for Florida. International Khader Baqlah scored 26 over two years, and Guarente was projected to score his first points this year as a senior.

This class wound up being pretty solid, but not the dominant group it looked like coming out of high school. Both Grant Shoults and True Sweetser missed a season, and could make them up next year. Sweetser scored in all three seasons before redshirting this year. Shoults scored 44 between his freshman and sophomore years, then missed his junior year with injury. Hank Poppe also scored individually as a junior. Ranked recruits Ho and Murphy both failed to score individually, though they did compete at NCAAs.

This turned out to be an incredible class for the Wolverines, with 6 of their 9 listed recruits scoring at NCAAs, and most of them in the double digits. Felix Auboeck put up a whopping 95 over three years and was in contention to be the #1 scorer in the class with 37 psych sheet points this year. Tommy Cope and Charlie Swanson combined for one of the top IM/breaststroke attacks in the nation for four years, scoring as sophomores and juniors. Miles Smachlo tore it up as a junior with 16 of his 17 career points. Jacob Montague scored in his first two years. Jeremy Babinet also scored as a sophomore. Ironically, it was the team’s top-ranked recruit, the sprinter Jones, who never scored individually.

Internationals really carried this class. Zheng Quah put up 19 or more in each of his three seasons and ranked #4 in the class in individual scoring. Pawel Sendyk scored 63 in total and ranked #5. Both were set for big scoring efforts this year. Michael Jensen scored individually as a freshman and junior, and was a key relay contributor, too. The transfer Matt Josa took two DQs at NCAAs in 2017 to miss scoring individually, but returned for a nice haul as a senior. Young made NCAAs this year, though he didn’t project to score. Gwo transferred out to Columbia, where he made NCAAs this year. Xie never earned an invite, and Vergani never competed in the NCAA.

How is Texas not on this list? Were they really not in the top 21 recruiting classes?

If diving were included in this, Texas would’ve been pretty high up in the re-ranks with how Grayson Campbell and Jacob Cornish performed. But on the swimming side, the Texas seniors are not a typical Texas class, especially when you account for the fact that Rooney & Collins transferred in and were not a part of the initial group

JCO’s analysis is correct. Of this year’s Texas seniors, none of the swimmers raced at NCAAs last year, except:

Maxime Rooney (for Florida)
Ryan Harty (who redshirted the 2016-2017 season, and so was in the prior class)

Jack Collins, who qualified for NCAAs last year but was a casualty of Texas having too many swimmers, started at Indiana, and was also in the HS class of 2015 (he redshirted the 2017-2018 season).

Sometimes, it can be hard to separate the myth of Texas from the reality of Texas. Top-class program, but not infallible.

That’s correct. If you look back at our tallying yesterday of points scored across four years for the outgoing senior class, Texas didn’t get a single NCAA swimming point from this high school class of 2016 (https://swimswam.com/revisiting-recruit-rankings-mens-high-school-class-of-2016/), though they did get some diving points and projected to have a few senior scorers this year.

Vols not exactly stellar – Although they seem to survive on diving.

That is the true power of the Dean. Blessed are we to be in his presence