Men’s 400m Freestyle World Championship Preview: Sun Yang Has A Target On His Back

In the past, Sun has proven his talent and closing ability can be lethal. Recently, however, he hasn't been swimming at the same level since serving his doping suspension. Archive photo via Victor Puig

The men’s 400m freestyle has consistently been a relatively fast event throughout the last 10 years, as the last five championships have seen every field full of stars in some of their prime years (minus 2007 where a young and relatively unknown Park Tae Hwan won gold). After Grant Hackett’s dominance in 2005 in the distance freestyle events, Sun Yang and Park have been the dominant forces in the event. Paul Biedermann did have his world record breaking performance in 2009, but hasn’t come anywhere close to that time since. 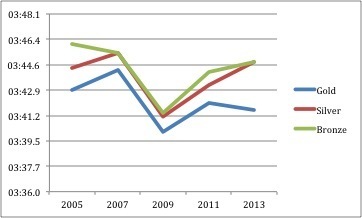 Park has two world championship titles in the event along with an Olympic gold medal, and Sun has a world championship and an Olympic gold, along with a silver medal from the 2011 worlds. Historically a 3:41-3:42 swim has been what it takes to capture gold and a 3:43-3:44 to be there for a medal. Aside from the winning time, the event got a little slower from 2011 to 2013, however some of the times that have already been posted this year lead me to believe the event will be faster in 2015.

After already posting a 3:42.84 this year, I believe Mack Horton will be number one on Sun Yang’s radar for the event. With Park not competing due to suspension, Horton looks to be the one to take his place as Sun’s dueling partner. In the past, Sun has proven his talent and closing ability can be lethal. Recently, however, he hasn’t been swimming at the same level since serving his doping suspension. 3:44 at the Chinese Spring Nationals was still strong this year, but it wasn’t the same caliber that we have seen from him in the past. It will be hard for Horton to replicate the 3:42 he posted this year, but I believe he can get there again for a silver medal.

James Guy has been knocking on the door the last few years and has had a good year this year, so I think we’ll finally see him make that jump onto the podium. Ryan Cochrane and David McKeon had a great battle at last summers Commonwealth Games and I think they’ll be really close again, only with more competition surrounding them at this meet. McKeon has proven his ability to swim 3:43 multiple times and Cochrane finally did it last summer.

Kosuke Hagino had a surprise silver in 2013, and will no doubt be in the mix, as will Connor Jaeger who won bronze in 2013. Based off of the times we have seen this year, both will have tough competition to get back on the podium this summer, however, it is certainly not out of the question.

Nicholas Grainger is one of many up and coming British mid-distance freestylers. He has already swum a 3:45 this year, so I see him making the final. Once he gets there he will likely have trouble keeping up with the big guns.

After his performance at the 2015 short course worlds, Peter Bernek is my darkhorse selection. Bernek won the 400 free in a time of 3:34.32 in December, breaking Grant Hackett’s 15 year old world championship record. Bernek has historically been more of a fixture internationally on the backstroke scene, but with his recent short course performances, he is poised for something big this summer in the mid-distance freestyle. Other swimmers who will battle for a spot in the final include Devon Brown of South Africa, Velimir Stjepanovic of Serbia, and Italians Gregorio Paltrinieri and Gabrielle Detti.

Really think Jaeger has another opportunity to medal again, his time of 3:46 is from a mid season untapered meet and I think dropping three seconds is achievable for him.

I’m with you on the win for Horton – he’s still very much on the upswing of his career and has the potential to be 3:40 in the next year or two. Jaeger will definitely be in the mix, but this will definitely be a crowded dogfight to get on the podium. This should prove to be one of the best finals heats of the meet.

Assuming the time column is off on that chart.

It was. Should be fixed now.

South Africa’s Devon Myles Brown looked smooth and confident in Monaco. Solid wire-to-wire win over Cochrane in the 400 and had the speed to pip Lochte for the silver in an outside lane in the 200. I think he makes the final.