The United States has lacked a dominant distance freestyler in recent years, but Jaeger may be their answer. Archive photo via Tim Binning/TheSwimPictures.com

The men’s 1500 free has consistently seen some very fast performances at the top (excluding 2007), with Grant Hackett in 2005, Oussama Mellouli in 2009, and Sun Yang ever since. After Mellouli had the second fastest performance in history in 2009, Sun Yang followed up breaking Grant Hackett’s 10 year old world record that was expected to stand for much longer. After the 14:34.14 in 2011 and a 14:31.02 in 2012, Sun reverted back up to a 14:41 performance in 2013. A 14:44-45 swim has proven to be enough for medal at recent championships. In 2013 Sun Yang got away with not doing the necessary training for the distance events and still earning gold medals, but if he shows up in Kazan not in top shape, this year might be different. With some young distance stars beginning to emerge, I expect this event will get faster as a whole. 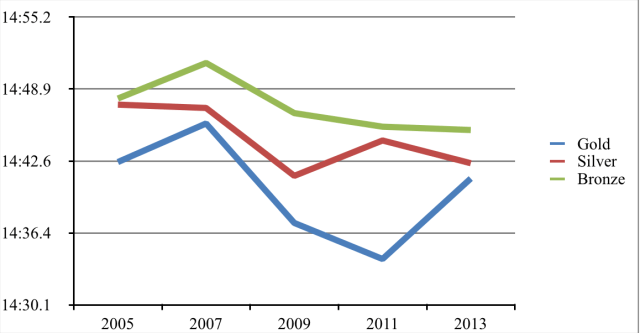 Ever since his world record breaking performance at the 2011 championships, Sun Yang has not lost this race at a major international competition. With the recent performances we’ve seen from Gregorio Paltrinieri and Connor Jaeger this year, that streak may come to an end.

Paltrinieri was a 14:39 last year and has already been 14:43 this year. He also won the short course world championship in a very fast time of 14:16. Sun on the other hand was a 14:49 last year and only a 15:00 this year. Of course, Sun is a big meet swimmer, and will bring his best in Kazan, but Paltrinieri has burst onto the scene recently and based on his trajectory a personal best this summer should be expected. I think he will pull away from Sun in the final 500 and take the title.

Connor Jaeger has been finding his rhythm over the last few years, and is setting up what could be his best major championship meet of his career thus far. He burst onto the world stage in 2012 when he qualified for the 2012 Olympic Games, and since then, he’s taken off. In the last year alone, he broke the American record in the 1650y freestyle, and has posted some impressive in-season times this summer in the distance freestyle events. Although he is getting better every year at the shorter races, I think the 1500 will be his best this summer. The United States has lacked a dominant distance freestyler in recent years, but Jaeger may be their answer.

Ryan Cochrane has been a consistent medalist in this event since the 2008 Beijing games where he won bronze, and should be there fighting it out at the front with Sun, Paltrinieri, Jaeger, and Horton. Ultimately I think Cochrane’s experience will push him past Horton for the bronze medal, in a tight battle.

Mack Horton put on a dominant display at Australian nationals earlier this year clocking in at 14:44, and should be able to recreate a similar performance in Kazan.

Michael McBroom has been solid the last few years, and has looked strong this season. He topped Jaeger head-to-head last night in the 800m freestyle in Santa Clara, and knows how to step up and race when the pressure is on.

Gabrielle Detti posted quick times last year and has backed them up so far this year, giving the Italians a strong 1-2 punch in distance freestyle. Stephen Milne also posted a fast 14:53 last year, and has already cracked the 15 minute barrier this year, setting him up for a berth in the final.

For a dark horse pick, Mykhailo Romanchuk of Ukraine is beginning to make a name for himself. After a 23rd ranked 15:07 last year, he has turned in the 5th fastest time in the world this year going 14:58. Romanchuk has already proved he can come through on an international stage, albeit a smaller one, as he won gold at the 2014 youth Olympic games in the 400 freestyle and also picked up a silver in the 800. If he can take off some time from his 14:58 this year, he certainly could be in the mix to qualify for the final. Others to watch for in this event include Pal Joensen of the Faroe Islands, Jordan Harrison of Australia, Gergely Gyurta Hungary and Japan’s Ayatsugu Hirai and Kohei Yamomoto.

I dont know if Paltrinieri can pull this, but I know one thing: he is not going to snatch the victory off Sun Yang’s hands with a final rush. He just doesn’t have the speed base that Sun Yang has. The way to beat the latter is, I think, to unsettle him by swimming fast from the start.

But besides Sun Yang, Paltrinieri should worry about Horton and Jaeger. Those 2 guys are on fire.

You’re right.
Paltrinieri has definitely no speed at all.
He can’t even beat Sarah Sjöström! 😆
https://www.youtube.com/watch?v=W0yBk91DZh4

Ha! That’s funny. I don’t think he was very amused, but she was… She has bigger shoulders than he does and blew his doors off on the breakout.

I’m guessing he has a bit more speed at 1450 meters than she does.

I have written it already, this guy does not have a single fast fiber in his muscles. Not that he has big muscles: he is 1,91 tall (6 ft 3in, I guess) and weighs 72 kgs. Plus, he basically does not kick, and his turns and underwaters are neglectable. I am not sure he can break 55 in the 100 free, with a dive.

I think Horton can win it.

Paltrinieri has come out of nowhere. Not on the radar a few years back. He has a huge upside.