Memphis Tiger Swimming Merges with YMCA of Memphis & The Mid-South 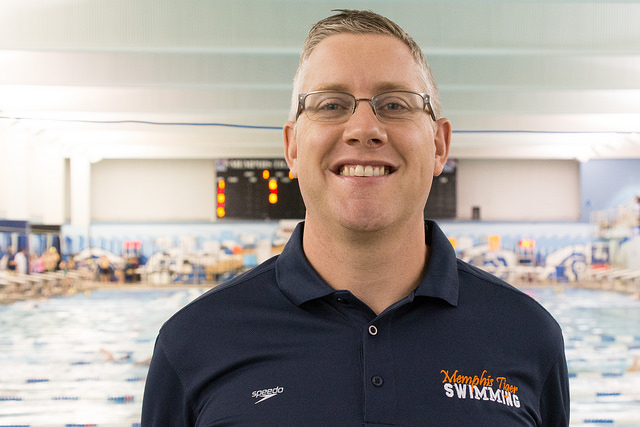 After the merger, Adam Byars (above) will serve as the director of competitive swimming for the new Memphis Tiger YMCA Swimming program.

The new program will be named Memphis Tiger YMCA Swimming and will be led by Adam Byars: who is currently the head coach for Memphis Tiger Swimming. He will serve as the YMCA’s new director for competitive swimming.

This gives Byars oversight of competitive swim programming, and guidance duties for developmental swimming, at 14 pools including area YMCA branches and the planned Mike Rose Natatorium at the University of Memphis. The programs currently train more than 600 developmental and competitive swimmers combined.

The two clubs were already partnered on the renovation of the new Mike Rose Natatorium, along with Splash Mid-South, the Rose Foundation, and the University of Memphis. That overhaul is scheduled to include the installation of a new, longer pool that would include a thermal bulkhead to allow for different water temperatures on different sides of the pool. Those renovations are expected to begin in early 2020, but has recently become embroiled in a contentious political battle in the city of Memphis.

In a press release, the new combined club says that one goal is to “increase interest and participation in competitive swimming by embracing multi-sport athletes.”

“Our vision is to grow the sport of swimming by making it convenient and rewarding for athletes of all interests and abilities,” said Byars. “Whether you’re a seasonal swimmer who is just getting started or a veteran year-round swimmer, Memphis Tiger YMCA Swimming will have convenient training options and age-appropriate coaching to help every swimmer enjoy the benefits of swimming and more fully develop their potential.”

Byars has been the head coach of MTS since August of 2017. Prior to that, he served as an asssistant at Arizona, where he was also an All-American athlete. He also spent 8 years as a coach with the Aiken-Augusta Swim League in Augusta, Georgia as head age group coach and head coach.

The merger coincides with Memphis Tiger Swimming being close to losing access to the University of Memphis aquatic facilities for an estimated 10-12 months during the renovations. A recent mega-club merger in North Carolina was driven by Sailfish Aquatics losing access to their pool space and merging with NOMAD, which has its own pool.

A spokesperson for the club said that this was a definite near-term benefit, but that the long-term goal was to create a single-club pathway from developmental to competitive swimming.

“The real goal of the merger is to grow the sport of swimming in the Memphis area by making it more attractive and convenient for seasonal and multi-sport swimmers by combining the developmental swimming expertise of the YMCA with the year-round competitive swimming expertise of Memphis Tiger Swimming.

“We believe this combination will not only help us attract more new swimmers to the sport, but retain more advanced swimmers who will chose to progress to the year-round competitive program.”

“Aquatics have always been central to our mission; from the lifesaving benefits of swim lessons to the health and recreational benefits of competitive swimming,” said Jerry Martin, president and CEO of YMCA of Memphis & The Mid-South. “We’re excited to welcome Memphis Tiger Swimming to create a structured, fun environment for competitive swimmers to develop skills through a defined progression program; from first-year summer swimmers to nationally-elite high school swimmers.”

Memphis Tiger swimming was launched in 1971, making it the oldest competitive team in the city. The club has had 24 of its current or former swimmers to the Olympic Trials in its history, and 5 have qualified for the Olympics, including 5-time Olympic medalist Jon Olsen. The club also counts among its alumni Kris Kubik, who would go on to be the assistant coach for the men’s swimming & diving team at the University of Texas under Eddie Reese, where he was instrumental in a number of NCAA Championship teams. Pace Clark, the University of Georgia school record holder in the 100 and 200 fly, is also a Memphis Tiger alumnus.

I wish Memphis had a strong Masters program to imprint on kids that swimming is a sport you can do and compete in for life.

LOL who joins with a YMCA.