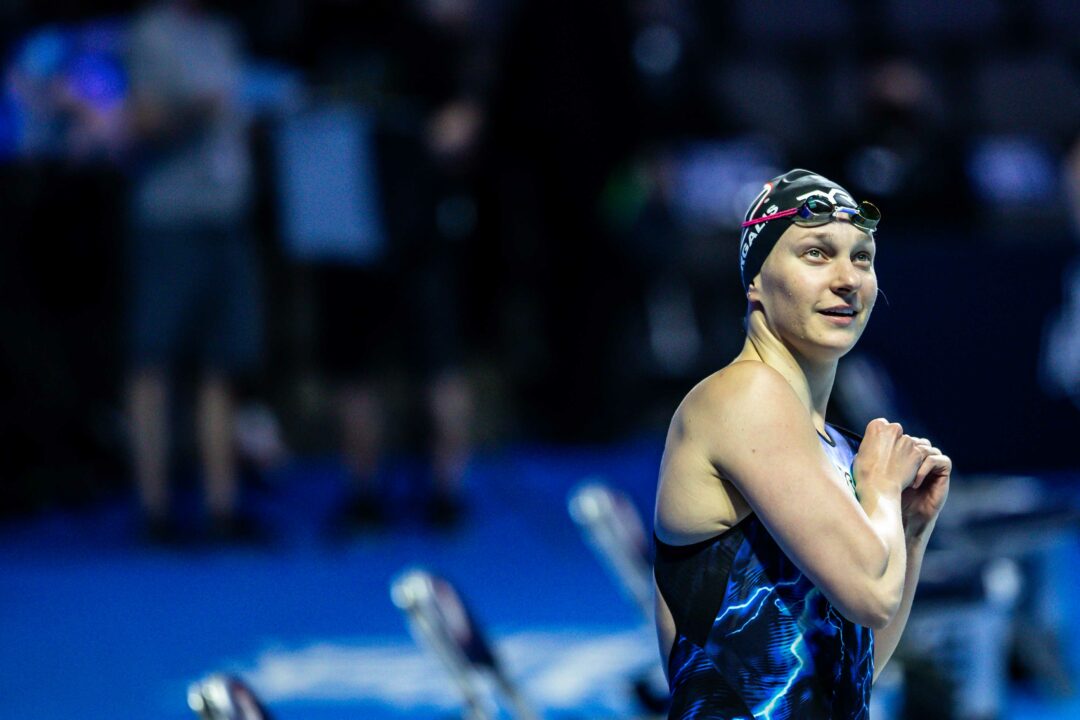 Olympian Melanie Margalis has revealed she's training with MAAC and Georgia Tech after her move to Atlanta earlier this year. Stock photo via Jack Spitser/Spitser Photography

Melanie Margalis, an Olympian and member of the 2021-2022 USA Swimming National Team, has told SwimSwam that she’s training with MAAC and Georgia Tech after she moved to Atlanta earlier this year.

The 29-year-old told SwimSwam that in addition to working part-time, she practices with the Metro Atlanta Aquatic Club, and sometimes with Georgia Tech. The University of Georgia 2014 graduate — who had been training with the school’s pro group — said she practices with Michael Norment, another Georgia graduate, founder of MAAC, and assistant coach at Georgia Tech.

“It’s different working with new coaches after all this time,” Margalis told SwimSwam. “One of the MAAC coaches stopped me during a breaststroke drill set to ask me if I found breaststroke to be my worst stroke in my IM. All I could do was laugh about that one.”

Margalis is a breaststroke and IM specialist. She’s currently on the U.S. National Team for the 400 IM, and she previously held the American record in the 100 SCM IM. She competed at the 2016 Rio Olympics in the 200 IM, finishing fourth, and won gold as part of the 4x200m freestyle relay.

This year, she finished sixth at Wave II Olympic Trials in the 200 IM. She scratched from the 200 freestyle at Trials, preventing her from qualifying for the 4×200 free relay. She placed third in the 400 IM, just missing the Olympic team cutoff mark.

Margalis also participated in Season 1 and Season 2 of the International Swimming League. During Season 2, the Cali Condors swimmer was ranked thirtieth through the fourth week of competition and fifth among all swimmers on the Condors, though she ultimately left the Budapest bubble early.

MAAC practices on Georgia Tech’s campus, and is a year-round competitive swim team. Georgia Tech is a Division I team.

Interesting move! Love how they commented on her breaststroke asking if it was her “worst part” of the IM 😂😂😂

It is great to once again have some good news about the ever-ebullient Melanie Margalis! Looking to see you soon again in a meet Melanie!

https://swimswam.com/olympic-gold-medalist-ryan-held-gets-engaged-to-nc-state-swim-alum-lexie-lupton/#comment-991202
Just here to give wow the credit he deserves as the genesis of the past few headlining articles. Thank you sir wow.

What about the other Olympic pros who trained at UGA, what are they doing? Are any of them back there training?

Really like her attitude when she races. Always a smile (which is not easy after a 400 LCM IM). Always joy for others who succeed, even if they beat her and cost her an Olympics spot. Just really authentic, great enjoyment of the sport. Same vibe as Nathan Adrian, who was always the first to rush over and congratulate a USA teammate who beat him.

Always loved Melanie’s personality. Such a nice person, always congratulating her competitors even when she has a bad race. I hope she makes a comeback and makes Paris

Just a terrific ambassador for USA Swimming. Hope she goes for Paris, too.

She is extraordinarily “heart-centered”. It shows.