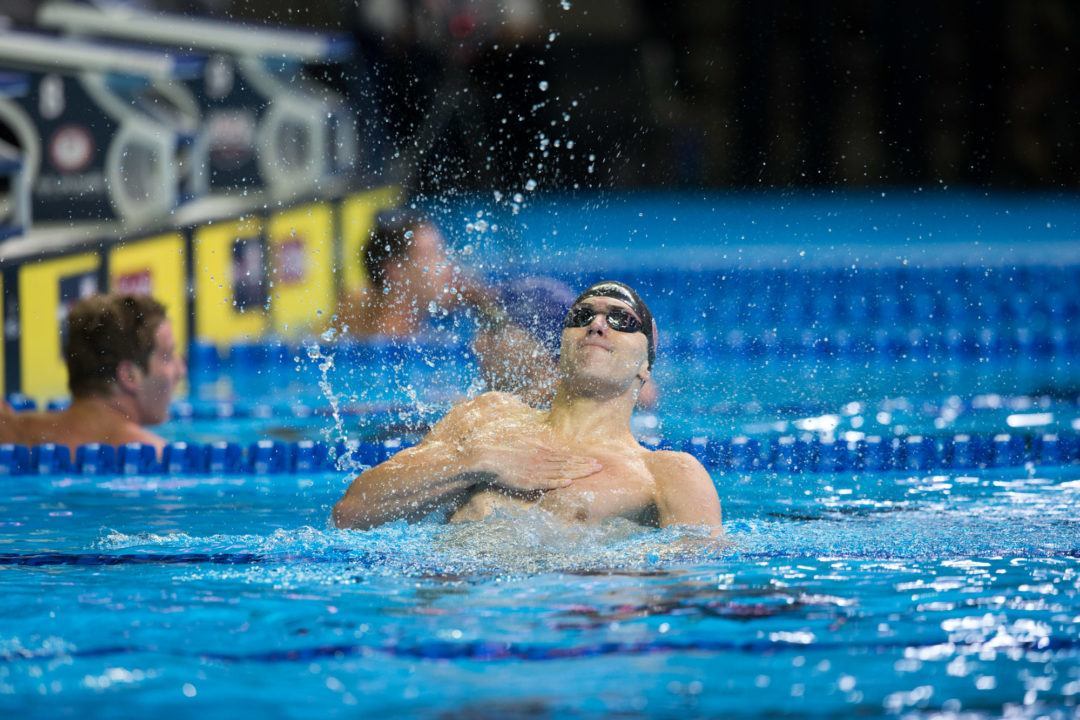 After a big swim in the B-final at the 2015 Summer Nationals, Ryan Held jumped on the radar as an Olympic Team candidate. Held, a first-time Olympian, made another leap in 2016 to earn a spot on the 4x100 freestyle relay Current photo via Tim Binning/TheSwimPictures.com

Meet first-time Olympian Ryan Held.  The NC State Wolfpack have been on a tear over the past three years, with Held as one of the driving forces.  After a big swim in the B-final at the 2015 Summer Nationals, Held jumped on the radar as a threat in Omaha.  He made the next leap during the 2016 collegiate season, and backed it up with a third place finish in the 100 freestyle at Olympic Trials

In his “Meet the Team” interview, Held talks about the racing culture of his the NC State team, how he got into the sport, and his “no name” status among the common swim fan leading into 2016 Trials.

Ryan Held is a sprint freestyle and butterfly specialist from Springfield, Illinois. He qualified for his first Olympic Games at the 2016 U.S Olympic Trials in a close fought 100 yard freestyle.

Held attended Sacred Heart-Griffin High School where he was a multiple time state champion and record breaker. In his senior year in 2014 he was named Illinois State Swimmer of the Year.

Held took his sprinting talents to North Carolina State University where he joined a team of successful sprinters.

At the 2016 NCAA championships Held helped NC State to its first ever relay national title. The Wolfpack won the 400 yard freestyle relay and added silvers in the 200 and 800 relays. In his individual events, Held finished 4th in the 100 yard freestyle, 7th in the 50 and 9th in the 200.

Held earned his first international call up at the 2016 Olympic Games in the 400 yard freestyle relay, narrowly missing out on the individual spot. In a close fought finish at the Trials, Held was coming back on Florida’s Caleb Dressel but the touch didn’t go his way. Held finished 3 hundredths of a second behind second place. His third place finish was enough to earn him a spot on the relay in Rio.

Loved that subtle stab at Rowdy….He really does need to work on his commentating skills tho.

“He really does need to work on his commentating skills tho”

Understatement of the year.

Trust me, i was putting it as nicely as I could.

“When Ryan Held was a kid he got no respect. The time he was kidnapped, and the kidnappers sent his parents a note they said, ‘We want five thousand dollars or you’ll see your kid again.’ “

GO GET THEM RYAN HELD! We are cheering for you! GO USA!

Question – Is DeSorbo the only coach working with the sprint crew in Raleigh??

Along with Bobby Guntoro!

DeSorbo heads the sprint group while Bobby Guntoro works with the stroke sprinters in a sprint sub-group. Held mainly works with DeSorbo.

Thanks for the clarification. That makes sense cause Guntoro swam for DeSorbo at UNCW.