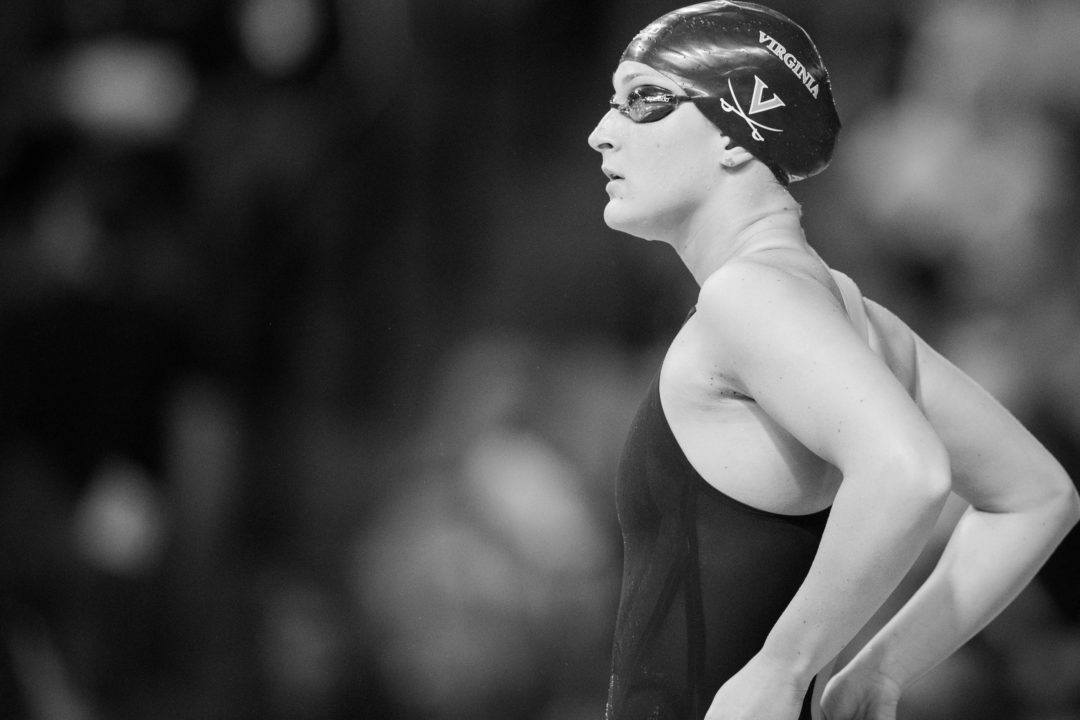 Meet first-time Olympian and distance freestyle extraordinaire Leah Smith, who will be competing in the 400 freestyle, 800 freestyle, and 4x200 freestyle in Rio Current photo via Mike Lewis/Ola Vista Photography

Meet first-time Olympian Leah Smith.  A multi-time NCAA champion and record holder, Smith came out of her final collegiate season to qualify for Rio in what many considered to be one of the most impressive swims at Olympic Trials: a 4:00.65 in the 400 freestyle that propelled her to #2 in the world behind only teammate Katie Ledecky.  Smith will also compete in the 4×200 freestyle relay and 800 freestyle in Rio.  In her “Meet the Team” video, Smith talks in-depth about her extensive family history in high-level athletics–including her World Series-winning great-grandfather–and her path to success in Omaha.

More information on Smith, courtesy of her official SwimSwam bio:

Born April 19, 1996 Leah Smith is a distance swimmer originally from Pittsburgh, Pa. Smith is a member of USA Swimming’s National Team in addition to the women’s swimming team at the University of Virginia, where she’s a school record holder in the 500, 1000 and 1650 freestyles. Her best event is probably the 500 freestyle – she’s the second-fastest U.S. swimmer ever in the event.

Family of Athletes
Smith grew up in a family full of elite athletes. In addition to her World Light Heavyweight Boxing Champion Great Uncle, Billy Conn, her father, Dan, was a pole vaulter at Virginia, her sister, Aileen, swims for Columbia, and her great-grandfather, Jimmy Smith, was a World Series Champion.

University of Virginia
Prior to attending Virginia, Smith was a student at Oakland Catholic High School, where she was listed as one of the top recruits in the class of 2013.

During her first year at Virginia, Smith qualified for the NCAA Championships right away, and earned the ACC Freshman of the Year. At the 2014 NCAA meet Smith had her best finish in the 1650 freestyle, picking up bronze.

Smith returned to Virginia to compete in her sophomore season, this time winning two golds in the 1650 and 500 freestyles, breaking the meet record in the 500. She also finished seventh overall in the 200 freestyle.

The collegiate distance freestyle events continued to be dominated by Smith in her junior year. Having already broken the 1650 freestyle NCAA record at the 2016 ACC Championships,  Smith went on to successfully defended her 1650 and 500 freestyle NCAA titles. She also finished sixth in the 200 freestyle and took fourth with her team in the 800 freestyle relay.

Collegiate Women Sports Award Finalist
Smith made huge progress at Virginia between her freshman and sophomore year, leaping from a single third-place finish at the NCAA Championships to winning two individual events in 2015. Due to her success she was listed as one of four finalists in the running for the Collegiate Women Sports Award. The last four finalists all won at least two individual events, putting Smith up against the likes of Missy Franklin, Simone Manuel and Kelsey Worrell. The winner of the award is put in for the running to the prestigious 2015 Honda Cup.

In South Korea, Smith picked up her two golds for Team USA. In the 400 meter freestyle, Smith dominated from the start, touching in 4:05.29. In the prelims, Smith broke the games record in 4:04.66 which was the fourth fastest time in the world so far that year. Smith also picked up a gold in the 4×200 meter freestyle relay, breaking the meet record along the way. She became the first Cavalier since 1999 to win gold at the World University games. She also had a fourth place finish in 200 meter freestyle.

Smith headed to Kazan as part of USA’s 4×200 freestyle relay team. The same team that won gold at the Pan Pacific Championships the previous year suited up for the relay again and continued its success. Smith swam the second leg of the relay to help USA take gold in the event.

World Rankings
Smith ended 2015 as the 10th ranked 800 freestyler in the world.

Smith improved her time by about 2.5 seconds to finish second in the 400M Free to punch her ticket to Rio. Smith swam to a 4:00.65, her previous best was a 4:03.14, beating third place finisher, Cierra Runge, by almost seven full seconds.

Smith again finished second to Ledecky in the 800M Free with a time of 8:20.18. This secured her second individual swim.

By finishing third in the 200M Free, Smith earned a spot on the 4x200M Free Relay.