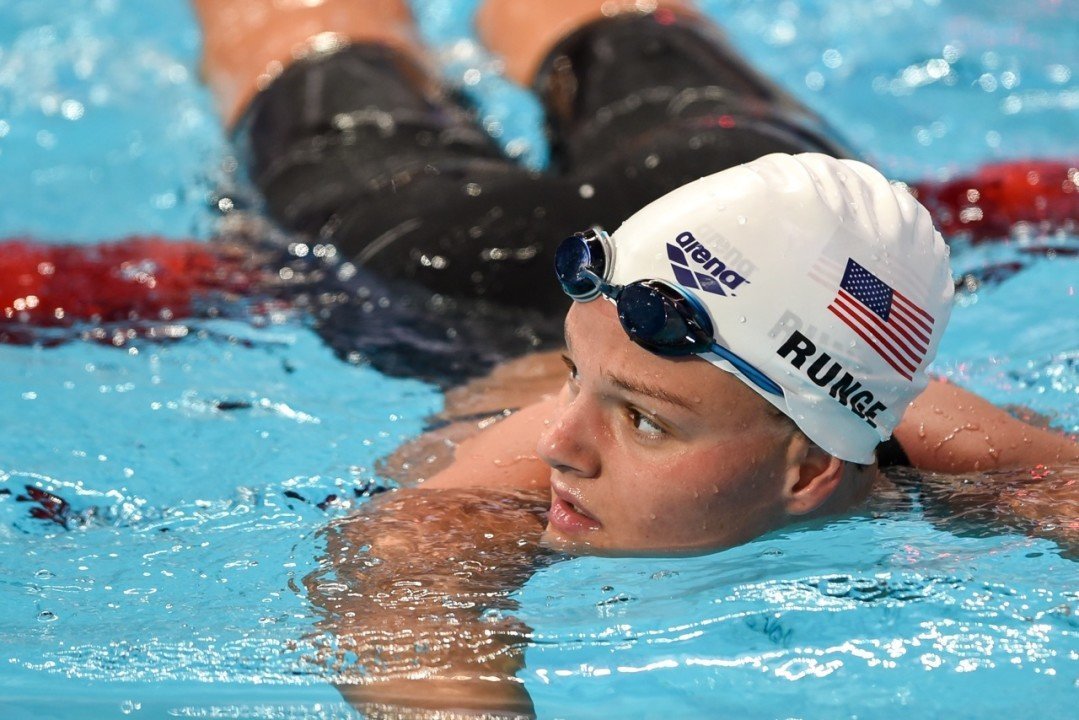 Meet 2016 U.S. Olympian Cierra Runge from Cochranville, Pennsylvania. Her “swimming story” started at 4 years old, a much younger age than most of the athletes in this series, where she pointed at the TV and told her mom that she wanted to be an Olympic swimmer – before she even was taking swim lessons. Runge qualified to swim as a relay-only member of the American 800 free relay.

Cierra Runge
Cierra Runge is a 6’4″ freestyle specialist born and raised in the state of Pennsylvania. Runge is in the end of her freshman year at the University of California, Berkeley. Born March 6, 1996 in West Chester, Pa. Runge is undeclared on her major. Although Runge is a versatile freestyle swimmer with the ability to race anything from the 50 to the mile, she’s been a sprinter for the most of her swimming career. Runge recently began focusing more on the distance events, and the transition has paid off. She recently broke the NCAA and Pac 12 record in the 500 freestyle at her first Pac 12 meet as a Cal Bear. She comes from the North Baltimore Aquatic Club coached by Bob Bowman and Erik Posegay, the same club that produced Michael Phelps, Felicia Lee and Annie Zhu. Coming into college, she had put more emphasis into her long course career. Her previous short course times coming into college didn’t necessarily reflect her speed, so her NCAA record didn’t surprise many people. Runge got inspired by swimming when watching the Olympics as a four-year-old, and her parents immediately signed her up for swim lessons at the local Y. Runge is an avid user of social media, and is a fan of the television show, “Friends.”

Seems to leave out the fact that she transferred to Wisconsin for next year.

Perhaps you missed the paragrah that reads, “After her freshman season, Runge announced that she would transfer to the University of Wisconsin after taking a year to focus on Olympic preparations in Arizona.”

Cierra’s Dad, Scott, is a paramedic whom I’ve had the privilege of working with over the years. I admire Scott and his wife for the countless hours they put in over the years commuting to Baltimore to help her chase her Olympic dream. On top of that they managed to fund her training with a paramedic’s meager salary. Go Cierra, there are a lot of paramedics and EMTs cheering for you 🙂

You can do it Cierra, we are so proud of you!