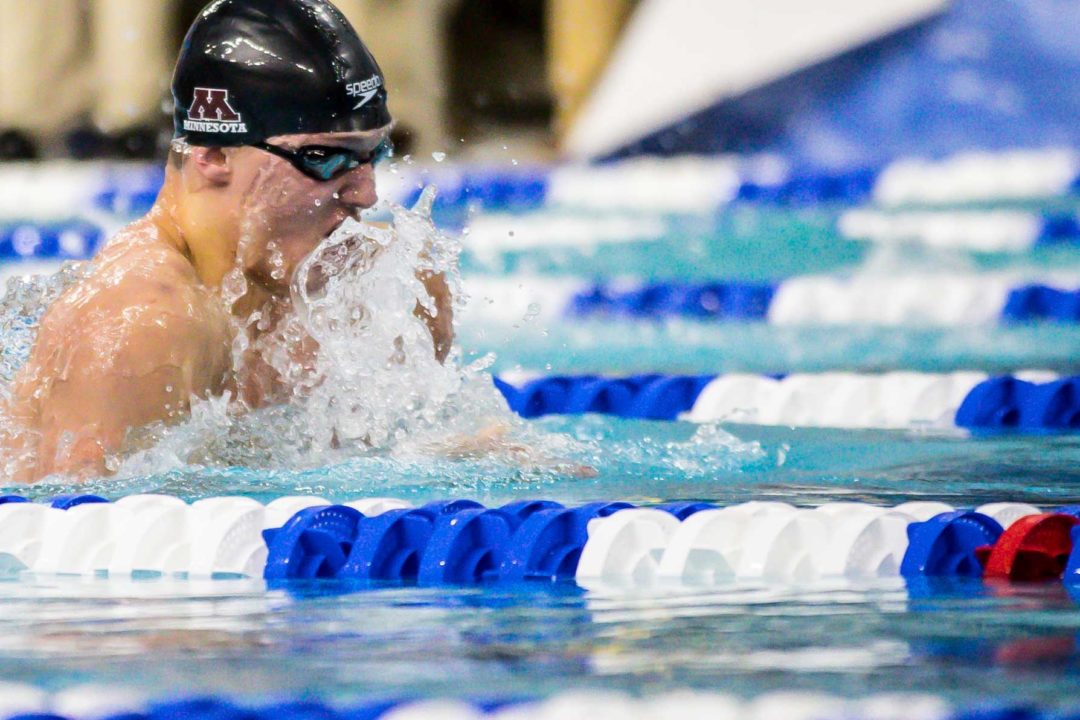 On the men's side, Minnesota's Max McHugh dominated the 100 breast in 52.93, touching over 3 seconds faster than anyone else. Archive photo via Jack Spitser/Spitser Photography

The Minnesota men and women each earned a victory on the road Friday as they won their dual meet with USC. This was USC’s first meet after head coach Dave Salo announced that this would be his last season in charge of the Trojans.

Tevyn Waddell pulled off a winning triple for the women, starting with a backstroke sweep. She was dominant there, posting a 54.55 in the 100 back and a 1:58.83 in the 200 back. Waddell later battled with USC’s Tatum Wade in the 200 IM. She led through the front half before Wade took over on the breast leg. Waddell kicked it into another gear on freestyle, though, coming back to win the race 2:01.31 to 2:01.40.

MINNEAPOLIS – The RV/No. 24 Minnesota swimming & diving program secured an upset sweep of No. 20/9 USC on Friday afternoon, as both the men and women claimed impressive victories against their Pac-12 Conference foes.

By the time it was all said and done, the Maroon and Gold won 16 of the dual’s 28 events, including 15 individual victories from nine different Gophers.

Sophomore Abbey Kilgallon jumpstarted the memorable day for the Gophers, winning the 1000 free with a time of 9:58.97. Minnesota placed one-two in the event, as Abbey Erwin touched the wall after Kilgallon to obtain second (10:14.50).

Just minutes later, senior Tevyn Waddell put the finishing touches on her first of three victories in the meet, winning the 100 back (54.55). Waddell’s performance marked another one-two result for the Gophers, with Emily Cook coming in second place (55.75).

After dominating the 1000 free earlier in the meet, Kilgallon powered Minnesota to a one-two-three-four finish in the 500 free.

Kilgallon’s winning time came in at 4:54.03, with Kate Sullivan touching shortly behind at 4:54.23. Erwin rounded out the sweep in third place (4:58.33), while Kelli McCarthy took fourth.

Senior Lindsey Kozelsky swept the 100 and 200 breast events on Friday, registering respective times of 1:00.47 and 2:13.21. In the 100 breast, Kozelsky led the charge in a dominant one-two-three-four finish, with the sweep being a signature moment in the soon-to-be upset.

Things might have begun even better for the Gopher men, as the afternoon kicked off with a big win in the 200 medley relay (1:29.07). The team of Gavin Olson, Max McHugh, Tuomas Pokkinen and Matthew Thomas combined to produce the winning time for the U.

As the upset began to take form for the Gophers, McHugh added fuel to the flame with a win in the 100 breast (52.93). McHugh would go on to sweep the breaststroke events following his first place finish in the 200 breast (1:56.84).

Senior Matthew Thomas also added two individual victories during the meet. The first came in the form of the 200 fly, which Thomas completed in 1:49.37. The Hollister, Calif. native won the 100 fly later in the dual, touching the wall in 48.71.

Quotable
“This was such a great way to finish up our training trip,” said senior associate head coach Terry Ganley. “This group has put in solid training and come away with victories over Hawaii and USC — and now are so well prepared for the championship season.”

Up Next
The Maroon and Gold have next weekend off before trekking to West Lafayette, Ind. to take on Purdue and Northwestern in a Big Ten Conference tri-dual (Jan. 31-Feb. 1).

Sophomores Laticia Transom and Alexei Sancov each posted a pair of wins against Minnesota as the Trojans fell to the Gophers on Friday (Jan. 17) at the Uytengsu Aquatics Center, as USC resumed the 2019-2020 schedule.

Jack Kirby championed the 100y back in 49.63, bringing in major points for the USC men’s team.

The Women of Troy swept both the 200y medley and free relays. The men finished just shy of first place in the 200y medley relay but took the 200 free relay.
—
USC divers were also in action at the Bruin Diving Invitational Friday. Trojan Henry Fusaro took second in the men’s 3-meter with a combined 723.50, 362.20 coming from prelims. Freshman George Korovin came in sixth with 664.60. Senior Brad Dalrymple finished 12th with 591.60.

What are you trying to say here? Proofreading helps communication

USC swam like their coach just quit on them