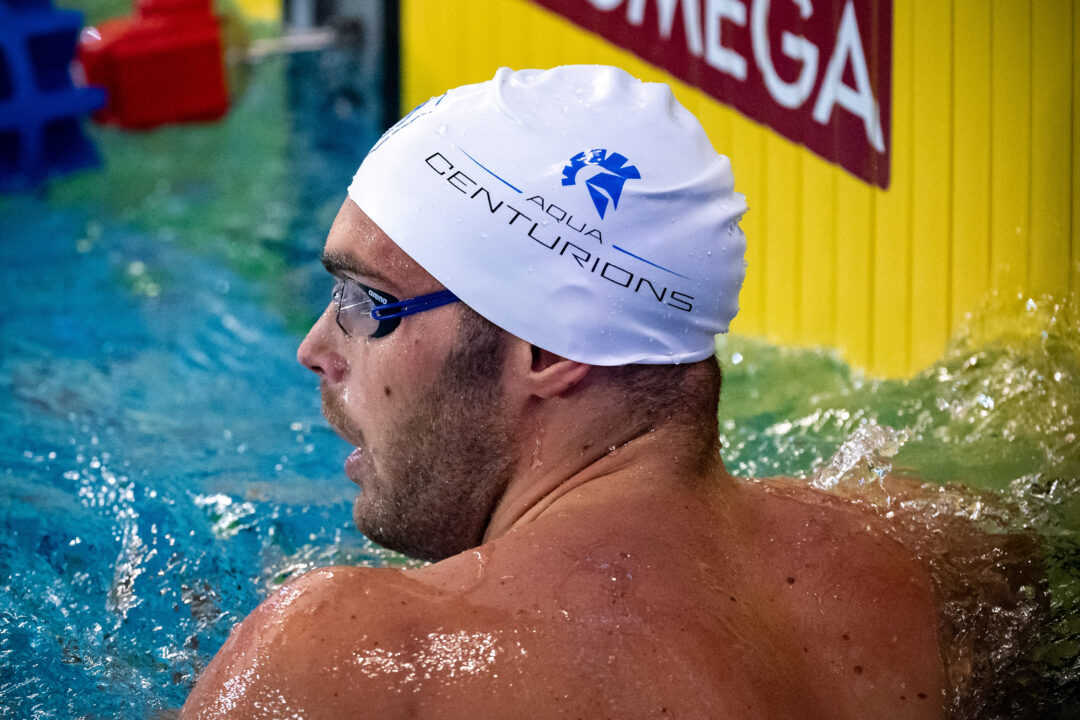 For the 2nd time in 2 meets, the 30-year old Matteo Rivolta has broken the Italian Record in the 100 fly in short course meters. Archive photo via Giorgio Scala / Deepbluemedia / Insidefoto

Matteo Rivolta, swimming for the Aqua Centurions in the 2021 ISL Playoff finale on Saturday, broke the Italian Record in the men’s 100 fly, and very-nearly clipped the European Record as well.

Rivolta swam 48.64 to win the race by almost two seconds ahead of Jose Angel Martinez in what was a fairly-weak field (the other best butterflier, Szebasztian Szabo, was disqualified).

Rivolta, who turned 30 earlier this month, held the previous record at 49.05, set in ISL Playoff Match #3 on November 18. Prior to that, he had been stuck on a 49.54 from August of 2017 – which poetically was set in the same Eindhoven pool where he has now broken the record in two straight meets.

Rivolta was able to improve by about two tenths on both the front half and the back half of his race to blow the lid off his former Italian Record.

So far this season, only American Caeleb Dressel (48.53) of the Cali Condors has been faster than Rivolta’s time. LA Current’s Tom Shields (48.78) is the only other swimmer who has been under 49 seconds.

Rivolta’s new front-end speed maybe gives him hopes of nosing his way into the big Szabo-Nicholas Santos showdown in the 50 fly on Sunday. He swam 22.14 at the European Championships, which is his best time (and the Italian Record).

The European Record in the event is 48.48, which was set by Evgeny Korotyshkin of Russian in 2009 in a now-banned polyurethane “super suit.” There are only two European Records in short course meters remaining that are older than that mark.

While this is likely the last meet of the ISL season for Rivolta, he is pre-qualified to race on Italy’s team at the Short Course World Championships via his silver medal in the 50 fly at Euros, though he could technically be bumped from the 100 fly.