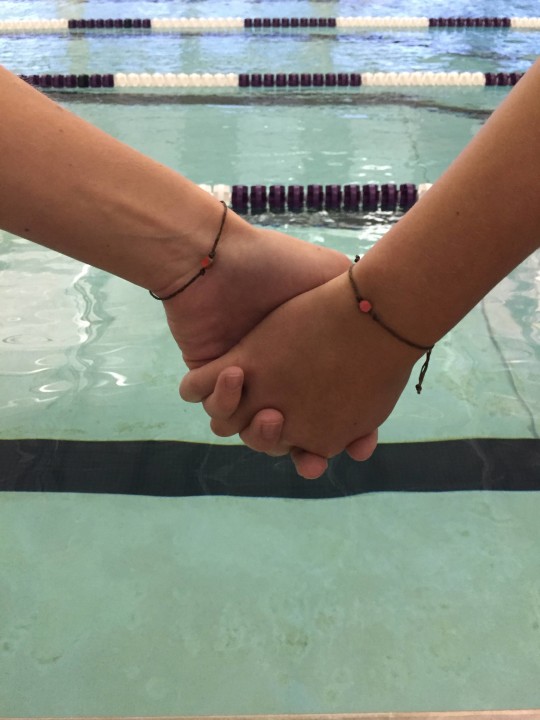 Mateo and Esther González Medina are the first brother/sister duo in Mexican history to compete in a mixed relay in international competition. Stock photo via Hannah Nicks

Mateo and Esther González Medina come from a family that has a rich history with swimming. Then they were swimmers for Texas A&M. Now they are the first brother/sister duo in Mexican history to swim together on the 4×100 mixed medley relay in international competition.

Before Mateo and Esther were even born, the Medina family had already rooted itself in the sport of swimming. Margarita Medina, their mother, began swimming with her siblings at a local YMCA in Torreón, Mexico, but the team was eventually shut down. Medina’s father built a small 25 meter, 2 lane pool in order to keep the program running. After reading books on how to coach swimming, Medina’s father decided to coach the swimmers himself, and ultimately earned a place in the Mexican Swimming Hall of Fame.

When Mateo and Esther began swimming at a young age, it was clear to their parents that they too would someday have a place in Mexican swimming history. Guillermo González, their father, recalls, “…when Esther was 8 years old and Mateo was 7, I videotaped them pretending they were… representing México at the Olympic Games. The images of brother and sister jumping on my bed ‘swimming’ side by side came to my mind.” And swim side by side they did.

At the 2019 Pan American Games in Lima, Peru, Mateo and Esther represented Mexico in the prelims of the 4×100 meter medley mixed relay. In doing so, the pair became the first brother/sister duo in Mexican history to compete together in a prelim relay in international competition. The relay qualified for finals, where it was then swum by other members of the Mexican team. Mateo fondly remembers swimming alongside his sister, “At first, I didn’t think much about the fact that we were swimming together, but when we walked out and saw my parents cheering, I realized how special it was for my parents having both of us there at the same time representing our country.”

The swim touched the hearts of many, but none more so than Mateo and Esther’s own parents. Margarita Medina recalls the swim, “For me to see Esther and Mateo representing México in an international meet during the same [mixed] relay is like the culmination of a dream my [father] once had of keeping his kids on the right path. There are no words to describe the beautiful feeling that it is to see that the seed they planted so many years ago is still giving fruits so many years later with their grandchildren.”

Mateo and Esther have always been close, but the relay brought them even closer together, “My relationship with her didn’t change because of that relay, but it definitely opened my eyes to the fact of how far we have come together…”

“Competing with her was very special, I will never forget being ready to do the relay take off and thinking ‘Hey, that’s my sister! This is awesome!’”

I love this, very heart-warming! Congrats to the whole family!!