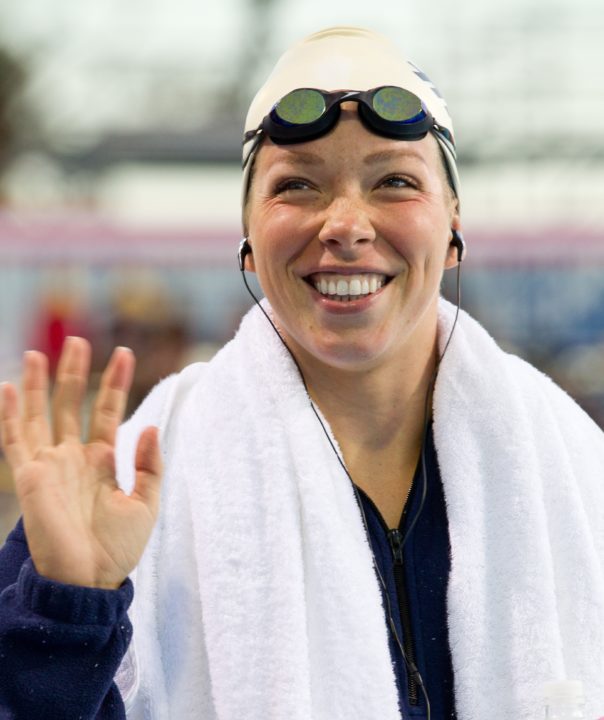 Saturday was day 2 of the Speedo Grand Challenge, hosted by Irvine NovAquatics in Southern California, with some great pros...

Saturday was day 2 of the Speedo Grand Challenge, hosted by Irvine NovAquatics in Southern California, with some great pros vs. amateur action.

The swim-of-the-night goes to Nashville Aquatic Club’s Maclin Davis who gave a great preview to SoCal swimming fans with a win in the 100 fly in 54.63, ahead of coming to USC permanently in the fall. This is a good chance to see where he’s at with his training, as he doesn’t travel to a lot of the big meets like many of his elite high school aged counterparts do. That time is about two-tenths better than he was this same weekend in 2011 (though that meet was the Arizona Invite).

That bettered a three-man final that included Dane Stassi (55.42) and David Seiler (55.62); Seiler will be one of the big challengers, along with Davis, for the final spots in the final at the Olympic Trials.

This was only a three-man final, as Australian Nick D’Arcy, who was a 54.8 in the morning, missed the race while in the bathroom sick.

The race of the night came in the women’s 200 free, where Kate Ziegler and Haley Anderson (both specializing in the longer freestyles) came down to the wire. Anderson led most of the way, but Ziegler’s closing split of 29.81 rated well ahead of her first 150 in terms of speed, and she made up nearly half-a-second to take the win in 2:01.72. Anderson took 2nd in 2:01.93.

Anderson’s USC teammate Lynette Lim was 3rd in 2:03.01, with 15-year old high school freshman Abbey Weitzeil placing 4th in 2:03.64. Weitzeil made her impact in her first year of CIF swimming by winning the Southern Sectional titles in both the 50 and 100 freestyles, but she’s just as good in the 200. This time was almost a best for her, just missing hte 2:03.3 she put up a few weeks ago in a similar setting at the Fran Crippen SMOC in Mission Viejo.

Britain’s Ellen Gandy dominated the 100 free in 58.90, as the only swimmer in the field to go under the minute mark. Trojan Swim Club’er Lyndsay DePaul was 2nd in 1:00.01.

The small Australian contingent at the meet made their biggest impact in the 200 backstroke. As a country, this is one of Australia’s weakest events, but that didn’t show in this meet where they swept the top three spots  – led by19-year old Joshua Beaver in 1:59.31. His teammate Matson Lawson, who grabbed second at Australia’s Olympic Trials just two-tenths ahead of Beaver, was also second here in 2:01.39. Ashley Delaney rounded out the sweep with a 2:01.81 for 3rd. He was very nearly run-down by USC senior-to-be Alex Lendrum in 2:01.83 for 4th.

Katie Ledecky is a young phenom in the distance freestyle events. Rebecca Mann is another young phenom. And now you have Isabella Rongione, 12, who makes the headlines. Braden, she has swum 8.58.33 in the prelims of the 800 free at the Speedo Grand Challenge. Her time is very close to the 11/12 NAG record of Rebecca Mann in 8.57.07. The future looks bright for these 3 young swimmers.
Maclin Davis is the future best american swimmer in the 100 fly. Don’t forget the american 4X100 medley relay in 2016 I predict just for fun. I put Ryan Murphy at the start on backstroke, Kevin Cordes on breaststroke, Maclin Davis on butterfly and Caeleb Dressel on freestyle.

U had fun there BoBO GIGI for that prediction .

Couldn’t be happier that Ziegler is having a good meet.Her coach made a good decision by picking this meet to go to; it gave her the opportunity to be atop the medal stand again, something that was needed to get her confidence back. As Yuri S. said in his interview, learning how to win is important and this was a good way to jog Kate’s memory. She looks happy and relaxed and that is nice to see. BOBO G- Not sure I would Rongione in the same class as Ledecky just yet. Definitely an up and comer and a talented kid but I would bet she is putting in a lot of yardage at a young age, and I mean… Read more »