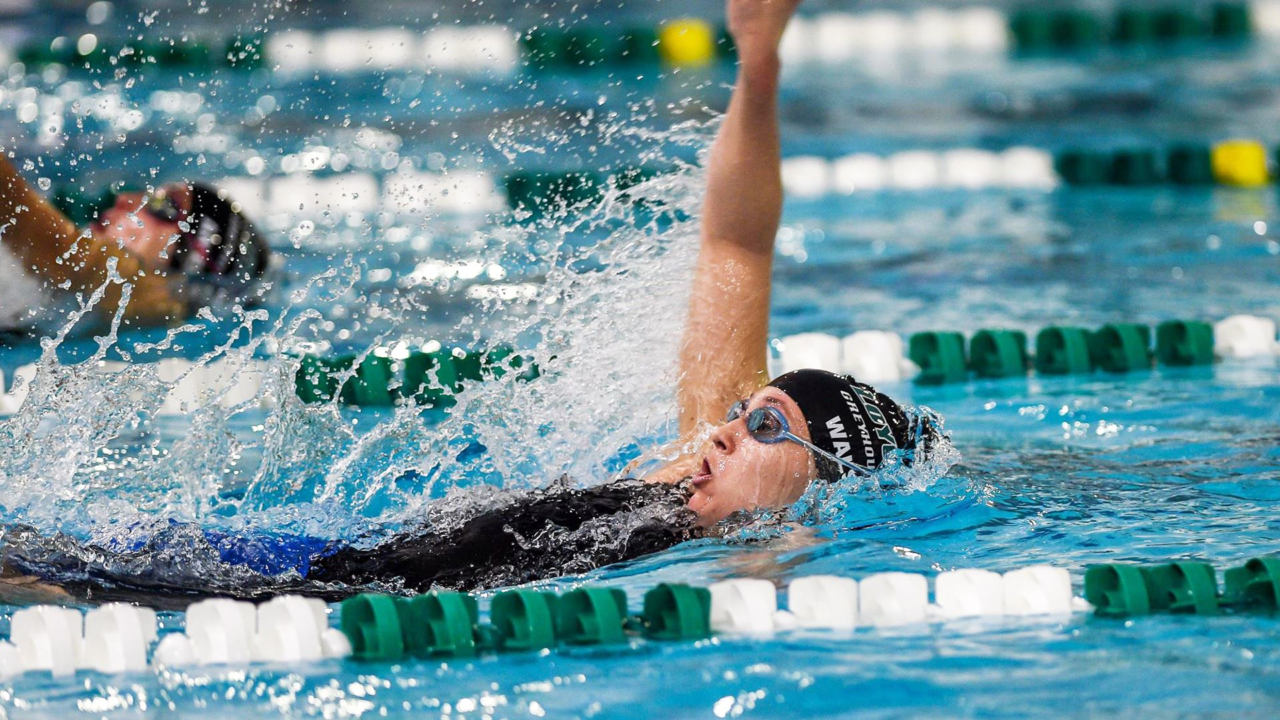 Loyola University Maryland began the 2019-20 season in style on Saturday, winning 25 of 32 contested events to record a pair of victories over host American. Current photo via Loyola Athletics, Craig Chase

WASHINGTON – Loyola University Maryland’s swimming and diving programs began the 2019-20 season in style on Saturday, winning 25 of 32 contested events to record a pair of victories over host American.

The men, who took first in 14 of 16 competitions and had the top three finishers in eight races, topped the Eagles by a score of 217-72. The women won by a final margin of 179-120 after winning 11 events overall.

Max Verheyen made an immediate impact in his collegiate debut for the men, winning all three of his individual races by comfortable margins. Jimmy Hayburn contributed to four victories (two individual, two relays), while Jack Still swept the diving events for the Greyhounds.

Hayburn, Anderson and Kolar also claimed the top three spots in both sprint free events. Hayburn won the 50 free with a time of 20.84, and he completed the 100 free in a winning mark of 46.71.

Lee nearly swept the fly events, missing out on first place in the 200 fly by just one-hundredth of a second after touching the line in 1:51.89. Other runners-up were Dean Spicer in the 1000 free, Dylan Champagne in the 200 free, John Sakovich in the 200 breast, Boran in the 100 back, Rutigliano in the 200 back and Venit in the 100 breast.

Megan Dickey and Elizabeth Walsh each contributed to three victories on the women’s side. Both were on Loyola’s winning 200 medley relay squad along with Devin Cronin and Anne Hayburn to begin the meet, as the foursome completed the race in 1:46.10.

Loyola is back in action next Friday, hosting Boston College in its home opener at the Mangione Pool at 5 p.m.

WASHINGTON – Both Ellie Kight and Lily Koenig won two events for the American University swimming and diving team in a home dual meet against Loyola (Md.) on Saturday afternoon at Frailey Pool. Overall, the Eagles fell to the Greyhounds on both the men’s and women’s sides.

The Eagles will be back at home for another dual meet against Georgetown on Friday, Oct. 18 at 5 p.m. AU is celebrating Senior Day and will honor its six seniors – Alex Brosvik, Emily Gill, Ellen Johnson, Ryan Jolley, Connor Chidsey and Garrett Sooter.