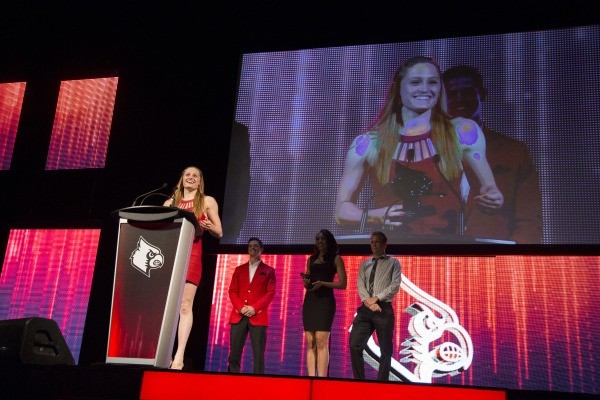 It’s banquet season, and the Louisville Lady Cardinals have transferred their run of success straight from championship meet season into this new frontier.

Kelsi Worrell and Tanja Kylliainen each picked up “Louie” awards at Louisville’s school-wide athletic department banquet, and a few days later, the team held its own swimming banquet to recognize its all-around banner season.

Kylliainen was also honored, earning the Louie for Senior of the Year. Kyllianen made the A final in all three of her individual events at NCAAs, including a 4th-place finish in the 400 IM.

That ceremony took place a week ago, and over the weekend, both women added more accolades to their trophy cases.

Worrell and Kylliainen joined men’s breaststroker Thomas Dahlia in winning the Rick Hill Award at the swimming & diving team banquet Sunday. That award is given to the athletes chosen by teammates and coaches as the most valuable member of the squad.

Dahlia made the championship final of the 100 breaststroke at NCAAs this season, which was the fastest NCAA championship final in the history of the event – for the first time in college swimming history, all 8 men in the final broke 52 seconds, and all 8 did so in prelims and finals.

Courtesy of the Louisville Swimming & Diving program, here is the full list of award-winners:

Ralph Wright Most Memorable Performance Award – This award voted by the team and presented annually to the individual who inspires the team with the most memorable performance.

Cardinal Spirit Award – This award is given annually to the individual that demonstrates commitment and team spirit to the University and Athletic Department. They are accountable to themselves, their team, family, and community, and have PRIDE in being a Cardinal. They continually encourage their teammates around them to be the best Cardinal that they can be. GO CARDS!

Underclassmen Unity Award – This award is given annually to the individual swimmer or diver who helps to unify the underclassmen and bridge the gap between upperclassmen. This individual shows future promise as a leader and demonstrates a serious commitment to the vision of the program.

Joseph Mittel Award – This award is presented annually to the graduating senior who has consistently supported the team in the devotion to training and competition.

Relay Award – This award is presented to the swimmer who has taken an individual sport to the highest team level by inspired performances as a member of relay teams. Relay award winners consistently performed at their best when others were depending on them.

Most Improved – This award is presented to the swimmer or diver who best demonstrated the persistence and dedication in their sport with proven exceptional performance improvement over the course of the season. This individual displayed an attitude of purpose on a daily basis.

Coaches Award – This award is given annually to the swimmer or diver who best demonstrates the true spirit of Louisville Swimming and Diving. It is an award in which the means justify the end. It is given not only for hard work and personal improvement, but for a willingness to enter into a partnership with coach and teammates in an effort to recognize one’s full potential. The recipient of this award has participated in the struggle, each and every day, and in the end found victory over personal limitations.

Rick Hill Award – Awarded annually to the swimmer or diver chosen by teammates and coaches as the most valuable member of the squad.

Cardinal Supporter Award – Awarded annually to an individual of the swimming and diving community, who actively supports the team, and is a valued member of this organization.

Igniting Performance –  Awarded to the individual who had an igniting performance, setting the tone for the team’s performance.

Perseverance Award – Awarded to the swimmer or diver who shows that with the odds against them, they keep fighting and never give up.

Photos from the Louie Awards:

(All photos are courtesy of Michelle Hutchins Louisville Athletics)