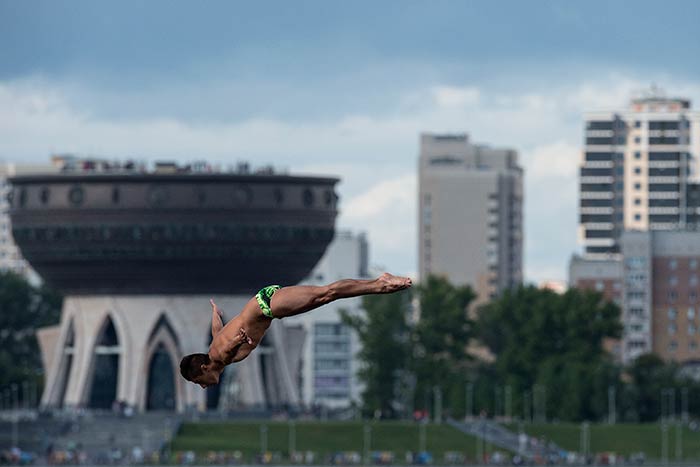 Yesterday, Mexican diver Rommel Pacheco won his first gold medal at the Diving World Cup. Pacheco finished 1st in the 3-meter event with a score of 504.40: obtaining his pass to the Rio Olympic Games.

During the medal ceremony, the Mexican flag wasn’t raised and the anthem wasn’t played. The Mexican Federation is currently suspended by FINA because they withdrew from hosting the World Championships in 2017. Rommel didn’t let this suspension stop him from showing his love for Mexico. The diver decided to sing Mexico’s National Anthem while the flags were raised.

“We carry Mexico in our heart”, said Fernanda Gonzalez one of Mexico’s top swimmers. The Mexican swimmer has been classified as the best swimmer in Mexico’s swimming history.

“What’s happening is very unfortunate and the only thing it provokes is stress, concern and uncertainty for us the swimmers. We don’t know what will happen with the qualification process and meets. It is definitely not the right moment for something like this to happen but I’m sure all my teammates, just like me, have Mexico in their mind and heart. It is an honor for me to carry the flag of our country, it be visible or not. We know where we come from and what it takes to get here”. – Fernanda Gonzalez

Lili Ibáñez, another one of Mexico’s best swimmers said:

“I represent Mexico not only in swim meets. My everyday actions and thoughts are the result of the country I was born in. I love my country, I love the people of Mexico, and I rather Mexico not waste 5 million dollars in a santion, but use instead to improve education, health, and athletes preparation. The people of Mexico can be sure that I will be representing Mexico in Rio very proud, even if I cant wear the flag on my cap”. – Lili Ibáñez

As of right now, it is not known if the Mexican Swimming Federation will pay the fee. What we do know is that the Mexican athletes will defend their country no matter what.

Hooray for the Mexican athletes

Gina – can you expand on your cryptic comment? I hope that you’re not ridiculing the Mexican swimmers.

More from Karen Vilorio
See All