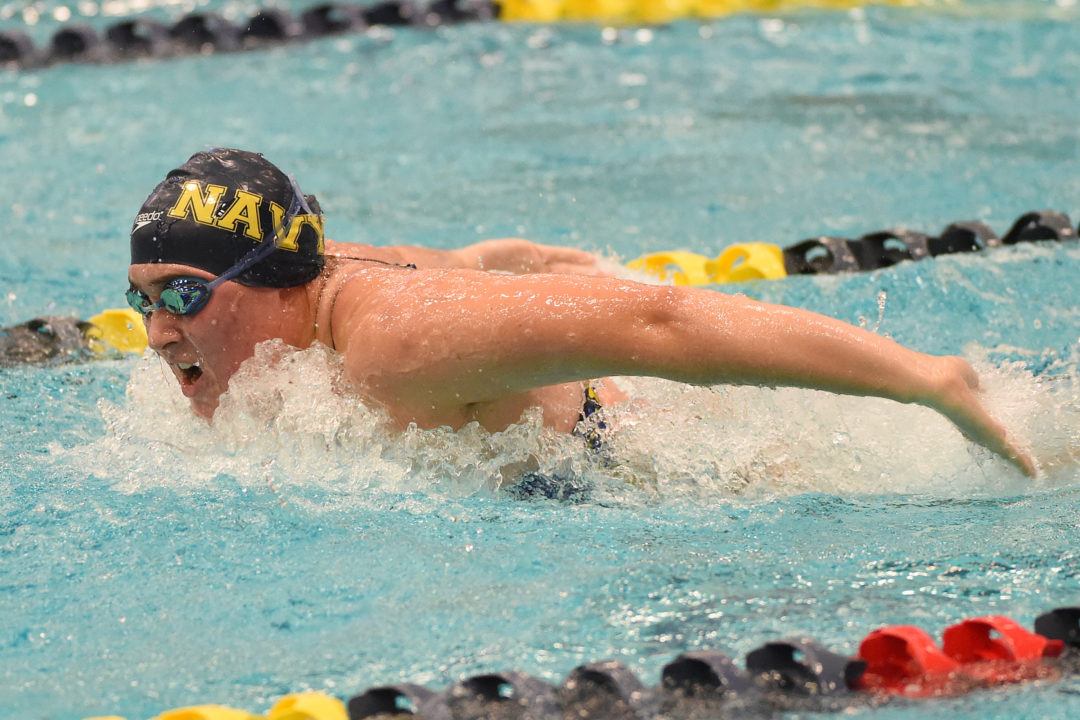 A free, live video stream of Saturday's meet LSU and UConn can be found on NavySports.com and the Patriot League Network. Current photo via Navy Athletics

The teams will be competing against one another in a 19-event dual-meet format.  Swimmers can compete in as many as four individual events and three relay events over the course of the two days.  All team points scored on Friday will be carried over into Saturday.

Navy’s women’s team returns 13 Mids who have earned All-Patriot League accolades at least once in their career.  The Mids compiled an 8-3 record a year ago and won the program’s sixth league title in a row.

“Following six weeks of solid training, we are eager to get up and race into our 2018-19 dual meet season,” said Navy women’s swimming head coach John Morrison.  “LSU and UConn bring two very good and well-coached teams to Lejuene Hall.  There is no doubt it will be a great two days of competition.”

The Navy men’s squad won the program’s 15th Patriot League title in as many years during the 2018 season.  The Mids, who finished the 2017-18 regular season with a 9-3 record, bring back 14 squad members who have garnered at least one all-league honor.

“The 2018-19 season has arrived and we are very much looking forward to racing and competing this weekend,” said Navy men’s swimming head coach Bill Roberts.  “UConn and LSU are new programs on our schedule and we are expecting a lot of excellent competition on Friday and Saturday in Lejeune Hall.  Both teams will arrive with several experienced and prepared athletes on their respective rosters.”

LSU’s women’s team posted a 6-4 record during the 2017-18 dual meet season and placed 11th at the SEC Championship.  The school’s men’s team compiled a 2-4 record during last year’s regular season before finishing in 10th place at the conference meet.

UConn, under the direction of second-year head coach Chris Maiello, who was an assistant coach for the Navy men’s team for five seasons, saw both of its teams post 5-1 records during the regular season a year ago.  The Huskies placed fourth in the women’s standings and sixth in the men’s tabulation at the 2018 American Athletic Conference Championship.

Navy and UConn have met twice before, with the inaugural 1995-96 meeting being contested in Annapolis and the teams competing again the following season in Storrs, Conn.  UConn won both prior women’s meets and the home team won each of the men’s duals.