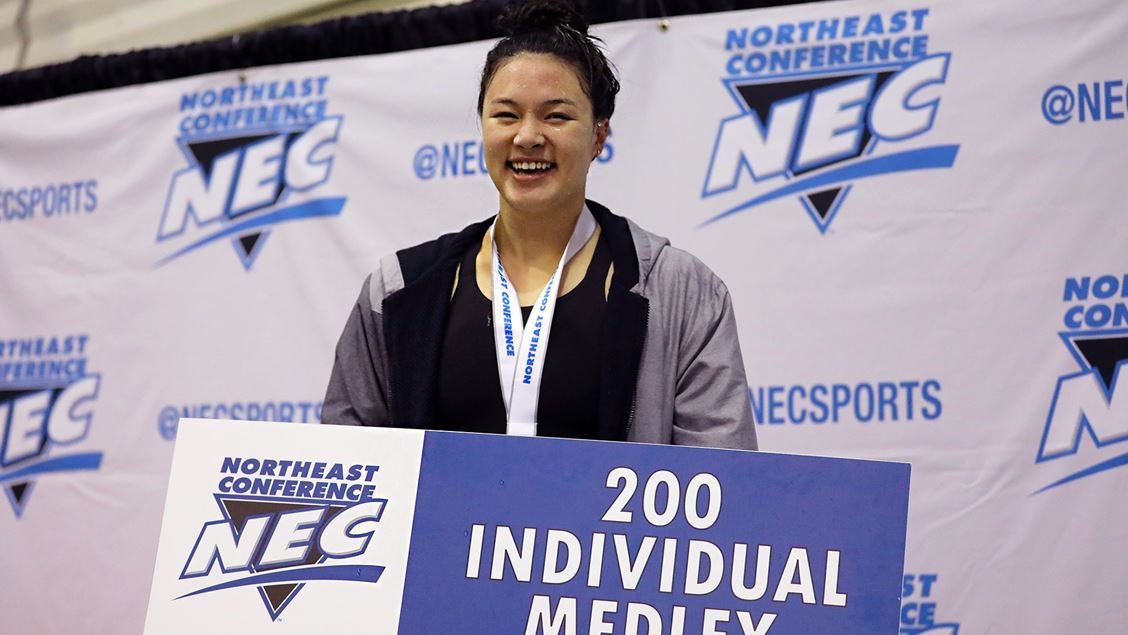 The 2-time defending NEC Champions from Bryant University pushed forward on their quest for a three-peat on Thursday with their third-straight event win to open the championships.

After winning both the 800 free relay and 200 medley relay on Wednesday, Thursday saw the finals session begin with a 4:53.18 from senior Alyssa Difiore in the women’s 500 free.

That race was a matchup of the last two NEC champions in this event, as Difiore, the 2018 champion, reclaimed her title from Alaina Scifo, the 2019 champion, who was 2nd in 4:55.62. Difiore’s swim was a lifetime best by almost 4 seconds, improving upon her runner-up finish from last year’s meet.

That was one of two event wins on the day for Bryant. Freshman Kyriana Chambo won the women’s 1-meter ahead of Wagner College’s Aleah Mirand, with Bryant going 1-3-4 in that event (including a 3rd-place finish from another freshman, Katelyn Kirves). Diving has been a significant part of Bryant’s NEC run – last year, for example, they had 6 of the top 7 finishers in the 1 meter – and the team has reloaded after graduating a huge class of divers at the end of last season.

“It was a good start to the individual events with two wins from Alyssa DiFiore in the 500 and Kyri Chambo in the one-meter,” said Bryant assistant coach Aidan Devers. “We had some big swims and great drops from morning to night. Tomorrow is a great day for us so I am excited to see how fast they can go.”

While Bryant extended their lead on day 2 of the meet, the swim of the day came in the 200 IM where LIU junior captain Amanda Peren, broke a conference record.

On Thursday, Peren swam 2:00.30 in the 200 IM to smash the old conference record of 2:01.88 that was set in 2015 by Wagner’s Anu Nihipali. Nihipali that year became the first-ever Wagner swimmer to qualify for the NCAA Championships.

CCSU’s Jeannette King won the women’s 50 free in 23.09, but the combination of Reeta Kanervo (23.64 – 5th) and Kayleigh Canavan (24.13 – 8th) still out-scored her in the A-final. CCSU also put 3 swimmers in the B final, but again Bryant was able to outscore them in that heat as well, even with only 2 qualifiers.

The Blue Devils were about 6-tenths behind Bryant before King, the 50 free champion, hit the water and opened up a big lead that anchor Simona Visinki (23.30) was able to hold on to. Also on that winning CCSU relay were Katie Czulewicz (23.82 leadoff) and Hallie Perrin (23.68). All 4 members of that winning relay are freshman.

The Head Coach for Bryant University is Katie Cameron