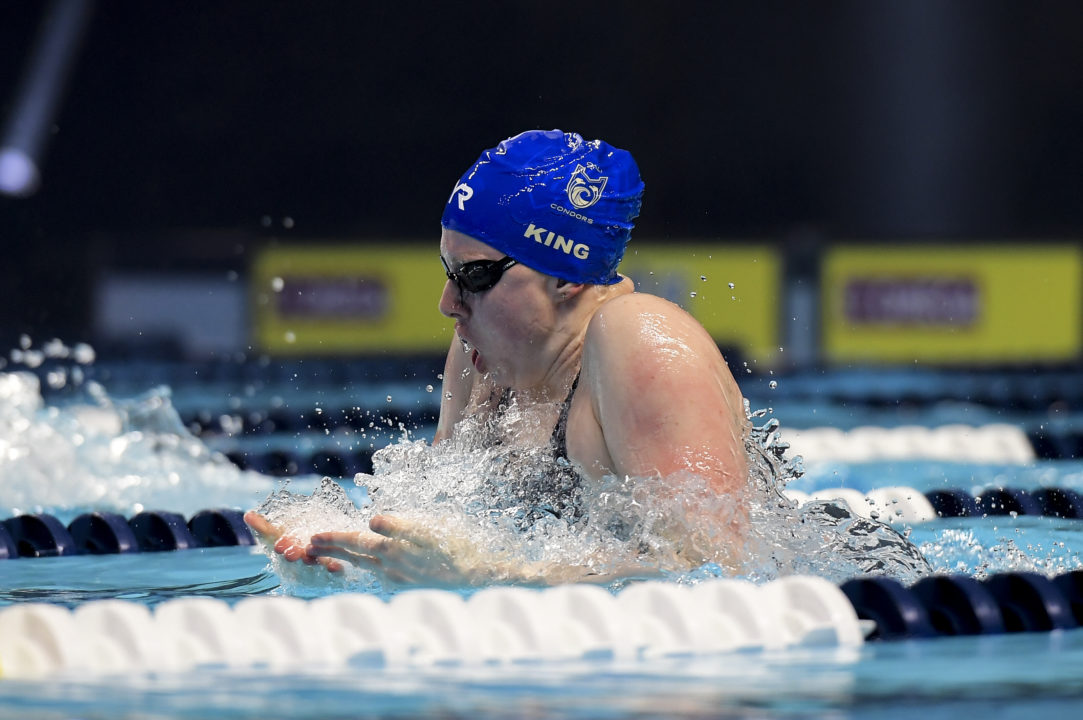 The International Swimming League has announced a $15,000 bonus that will be paid to Cali Condors swimmer Lilly King on account of her undefeated inaugural season in the league.

King won the 50 breaststroke, 100 breaststroke, 200 breaststroke, and swam on the winning women’s 400 medley relay at all 4 of the Condors’ meets in the 2019 season. The only other swimmer who went undefeated on the year individually, let alone on relays, was Daiya Seto of Energy Standard. Seto only swam the finale in Las Vegas, however, so his tally was 3-for-3, and he also swam on a 7th-place medley relay, so his record wasn’t quite as perfect as King’s.

In spite of the efforts of King (and Caeleb Dressel and Melanie Margalis, who also appear in the top 10), the Condors finished 3rd at the Las Vegas Grand Finale last weekend at Mandalay Bay.

King won 2 Olympic gold medals at the Rio Games in 2016, topping the 100 breaststroke and 400 medley relay. She’s the two-time defending World Champion in long course in both the 50 breaststroke and 100 breaststokre as well. King’s most frequent international rival, Yulia Efimova of Russia, is ineligible for ISL competition as a result of a doping sanction that she received in 2014.

And he didn’t participate at all in the first meet.

I would say it’s fair to recognIse it. How much is it:~ $1000 per race? It would be a great prize. Yesterday. These days it’s pretty much modest for such unique professional achievement.

She deserves it and the recognition. Merry Christmas to her!

If to forget about her confrontation with Efimova who has less media attention among outstanding stars of recent years: Ledecky, Manuel, Franklin, Smith, King? And her achievements in swimming are astonishing. Her consistency is remarkable. Maybe the best one. And she is indeed the swimmer who hates to lose.

Not only does she hate to lose, but let’s flip it around & say she REALLY LOVES to win.

Ok, let’s put it this way : it is my perception of disproportionately low media coverage of Lilly King.

Good for her. She is so humble

Lily King is many things. Not sure humble is one of them.

But why does she need to be? Different personalities are fun, and Lily King is fun and an amazing swimmer.

Totally agree with JRED, but can you at least spell her name right?
It is Lilly. I see people do this all the time.

The humble part was a tremendous joke. Way to pick up on it

Hey, we’re at the spelling part of the show, so you shouldn’t expect much irony detection.

Please tell me they’ll also give bonuses to world records?!

World records is kind of FINA’s department. Also because most of swimmers are not peaking for three months long ISL season the management of this league underlines consistently that great times are not the goal of this competition. Therefore they may not want to focus on the quality of individual achievements.

They can’t really do that and then continue saying it’s all about racing and times don’t matter.

Also SC competition isn’t well developed yet and therefore has a lot of soft world records. Maybe ISL wants to wait for a while until breaking SC World record becomes a rare event. It saves money now. 😀

I can even try and understand the arguments… but swimming is a timed sport and always will be, there’s no scape from it… Are we gonna start giving scores to most beautiful stroke next???? Or keep swimming until someone gets knocked out? LOL

Thing is, let’s keep track of times, training and athletes can certainly adapt to a new months long season and find new ways to perform. Maybe not in this generation, but I see it as something doable.

Maybe in another year or two they will start paying bonuses for ISL records.

Soooo some ISL guy said “oh look we have an extra $15k laying around, guess I’ll give it to someone who deserves it” (but seriously how do they have this kind of money laying around??

CG is a billionaire. ISL needs more (public/media) recognition. Lilly King is a popular athlete around the world.

No, she is not popular around the world. Not even around America.