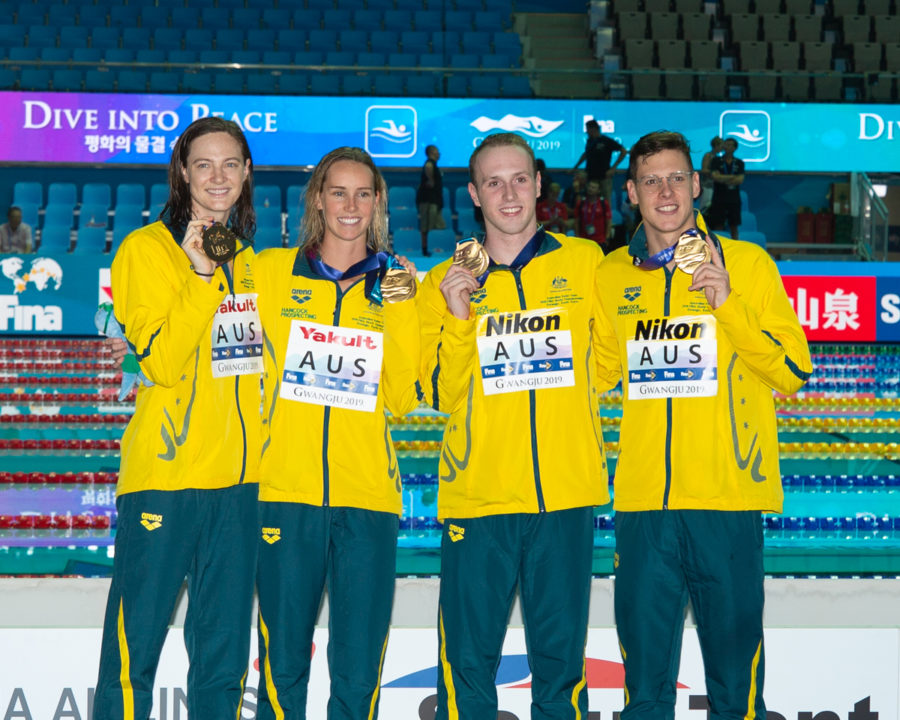 Swimming Australia will be appointing an interim CEO shortly and the search for a CEO to lead to Tokyo, Paris and beyond will commence soon. Archive photo via “Rafael/Domeyko Photography”

Swimming Australia has already seen head coach Jacco Verhaeren not seek an extension of his contract which expires next month and now its CEO has announced she will be resigning.

Today, October 30th, Leigh Russell advised the Swimming Australia board that she will be stepping down as CEO at the end of November.

“With the revised timelines pushing Tokyo out by a year, meaning an immediate kick off post games to preparations for Paris, I felt it was in the best interests of the organisation and the sport to allow a new CEO to take the reins now,” Russell said.

“I’m proud of what has been achieved over the past three years and I feel Swimming Australia is now in the strongest position it can be going into Tokyo and Paris.”

Vena Murray had previously held the title of Executive Director within Swimming Australia back in the 1990s, a term equivalent with CEO in today’s terminology, but Russell made history as the first official woman CEO within Swimming Australia. She took office in April of 2018 when incumbent Mark Anderson left the organization to take over as CEO of Collingwood Australian-rule football club.

Prior to joining Swimming Australia, Russell served as CEO of Netball Victoria and the Melbourne Vixens, as well as GM People & Culture at Essendon Football Club.

Swimming Australia deputy board chairperson, Tracy Stockwell, said that Leigh had been a strong leader for the organization and for the sport over the past three years.

“Under Leigh’s leadership, we have built a strong executive and a high-performance team. There is also a clear strategy and vision,” Stockwell said.

“As Australia’s number one Olympic sport, we are well placed going into a disrupted but highly anticipated Tokyo Olympics and the Paralympics in 2021 and then on to the 2024 Games.

“The Board and Leigh agreed that the revised timing of the Tokyo Games means that now is the right time to find a new CEO with the passion and drive to lead the sport into the future.

“Leigh’s leadership and commitment to high-performance and integrity has driven major changes in the organisation and has set Swimming Australia up for success both in the pool and out of it.

“As one of the few female sports leaders in the country, Leigh has championed inclusion and a culture of high-performance, support, mentorship and leadership that is underpinned by strong values.

“We wish Leigh all the very best and thank her for her significant contribution to our sport.”

In addition to Verhaeren and Russell departing, we also reported how Swimming Australia President John Bertrand‘s term has also expired. He had served the maximum director term as per the organization’s constitution.

Not to mention that there is no major partner/sponsor nor broadcaster going forward. Yep, she did a stirling job in her 3yrs! Can’t help but think there’s more to this story.

Everyone needs a little extra consideration before ppl put the knife in.

Bring back Dennis…….
He can teach Rowdy a thing or two.
Centre metre perfect.

Giaan is the worst…oh for the days of NIcole Stevenson!

Agreed – Nicole is great. I’m getting so old I even long for the days of Norman May! Gold, gold, gold!

GHFSS have committed to increased funding for the swimmers, not SAL. They have agreed to stay with SAL until Tokyo 2021 and no further. It must take an absolute genius in sport admin to lose the support of Australia’s richest businesswoman.

As for the Covid lockdown comment … no comment, unless of course you are referring to her being a mother? The fact of the matter is that she was not even a scratch on board ousted Mark Anderson.

Doubt it matters who i s on the Board . There will be no Olympics & no major championshi p s till 2023.

What matters corn pop, irregardless of when competition is likely to occur, is the integrity & honesty of who they appoint as CEO and on to the board. I’m guessing Russell didn’t pass the pub test.

I think they were trying to elevate things to the Yacht Club test . .