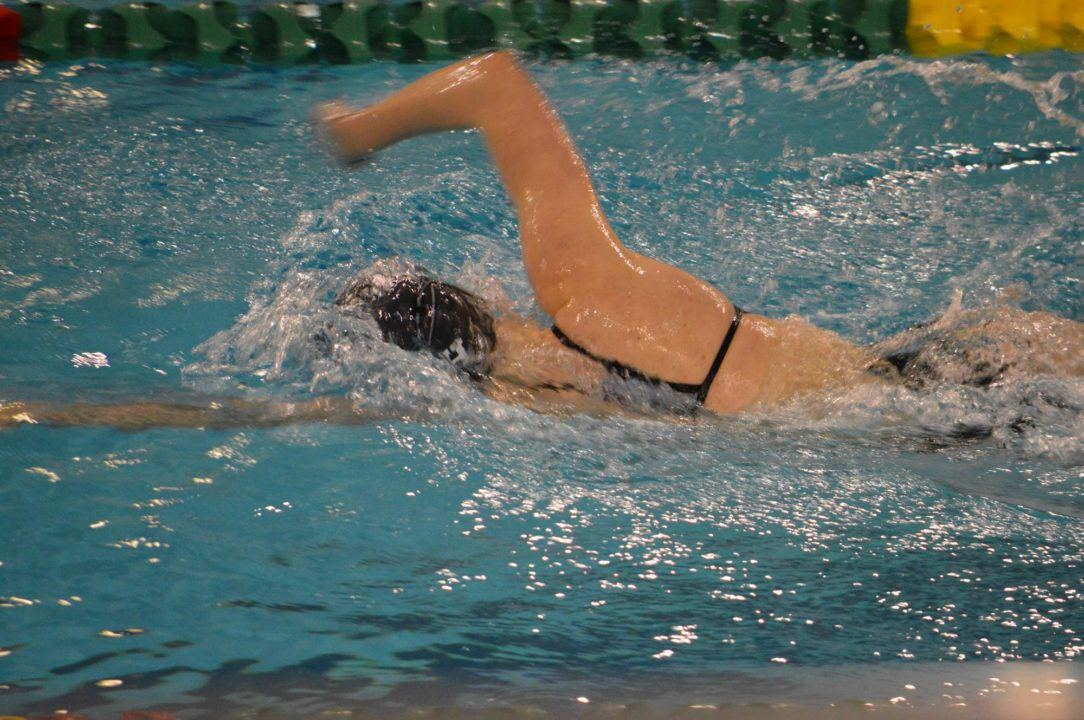 It was another great night for the Lehigh men's swimming and diving team, who cruised to their fifth straight victory on the season with a 154-117 win over La Salle. On the women's side, Lehigh posted a 164-108 victory. Current photo via Lehigh Athletics / Josh Liddick

EMMAUS, Pa. — It was another great night for the Lehigh men’s swimming and diving team, who cruised to their fifth straight victory on the season with a 154-117 win over La Salle at Emmaus High School on Wednesday night.

The meet was to generate buzz and support of swimming in the Lehigh Valley and there was quite a crowd on hand to watch the Mountain Hawks take on the Explorers.

It had been quite some time since the Mountain Hawks were last in action, the last meet being back on Nov. 16 at Lafayette. Only junior Walker Wilson and freshman Glenn Lasco have had the opportunity to race competitively in the last couple weeks, as they were both coming off successful runs at the US Winter National Championships in Greensboro, N.C. last week.

The men started the meet off with a usual victory in the 200 medley relay with the ‘A’-Team of Wilson, junior Tyler Christ, junior Teddy Smith and sophomore Greg Giannella coming in first place with a time of 1:33.34. Junior Kevin Fleck followed that up with a win in the 1,000 yard free with a time of 9:43.70. Fleck finished just ahead of teammates Greg Gardner and Matt Feryo, as the Mountain Hawks ended up sweeping the event.

Wilson picked up his first individual victory of the meet in the 200 yard free with a dominant time of 1:41.21. Senior Kian O’Brien came in third place with a time of 1:45.72.

Lasco’s first individual win came in the 100 yard back with his winning time of 51.66, finishing almost exactly two seconds ahead of teammate Owen Thomas, who ended up finishing in third place.

Lehigh closed meet out with a victory in the 400 free relay, as the team of Wilson, Giannella, Rogers and Lasco finished in first place with a time of 3:06.58.

“It was a rough meet, warming up and warming down,” said head coach Rob Herb. “Wednesdays are a rough time for us to go like this especially when we’re competing on weekends.

“But the importance of coming out to this community is important for all of Lehigh and we want to be a part of that. That’s why La Salle’s coach and I, both from the area, wanted to do this. Our kids came in here and showed the community that Lehigh is a strong Division I swimming and diving program.”

The Mountain Hawks are 5-1 for the first time since the 2011-12 team started the year 7-0. Lehigh will have a little bit of time to head home for winter break before the team hosts Army West Point on Jan. 11 at Jacobs Pool for Senior Night.

There really isn’t a more dominant team around right now than the Lehigh women’s swimming and diving team, who picked up their sixth straight victory on the season with a 164-108 win over La Salle at Emmaus High School Wednesday night. With the win, the Mountain Hawks improve to 6-1 on the year.

The women opened up the meet with a 1-2-3 finish in the 200 medley relay with the team of Anna Francisco, Allison Morel, Olivia Giampietro and Payton Miles coming out on top with a time of 1:47.70.

Miles got the surprising nod in the 50 free, beating out Foley who had been all over these particular events in the last couple weeks. Miles finished the event with a 23.99 to Foley’s 24.29. She also got the best of Foley in the 100 free, taking the event with a time of 52.51.

The women closed out the meet with a win in the 400 free relay, as Foley, Miles, Giampietro and Ferreira finished in first with a 3:35.10.

On the diving side, Megan Fennell got the victory in the one-meter dive with her score of 249.38.

“We have exams, we have a little bit of a layover and then we have three weeks of training where we are all just focusing on keeping the energy up and getting these swimmers ready for Patriot Leagues,” said head coach Rob Herb.

The women are now on a quest to start the season 7-1 for the first time since the 1999-00 season. Lehigh will have a little bit of time to head home for winter break before the team hosts Army West Point on Jan. 11 at Jacobs Pool for Senior Night.

EMMAUS, Pa. – The sibling combo of Emily Wolbert and Zachary Wolbert combined to win five different events as the La Salle swimming and diving teams squared off against Lehigh on Wednesday. The eldest Wolbert won the women’s 100 and 200 fly, while the younger brother, Zachary, earned victories in the 100 fly, 200 fly and 200 individual medley.

La Salle will next compete in dual action on Wednesday, Jan. 16 at Villanova. Prior to that, the two teams will head south for their annual winter trip to Florida.