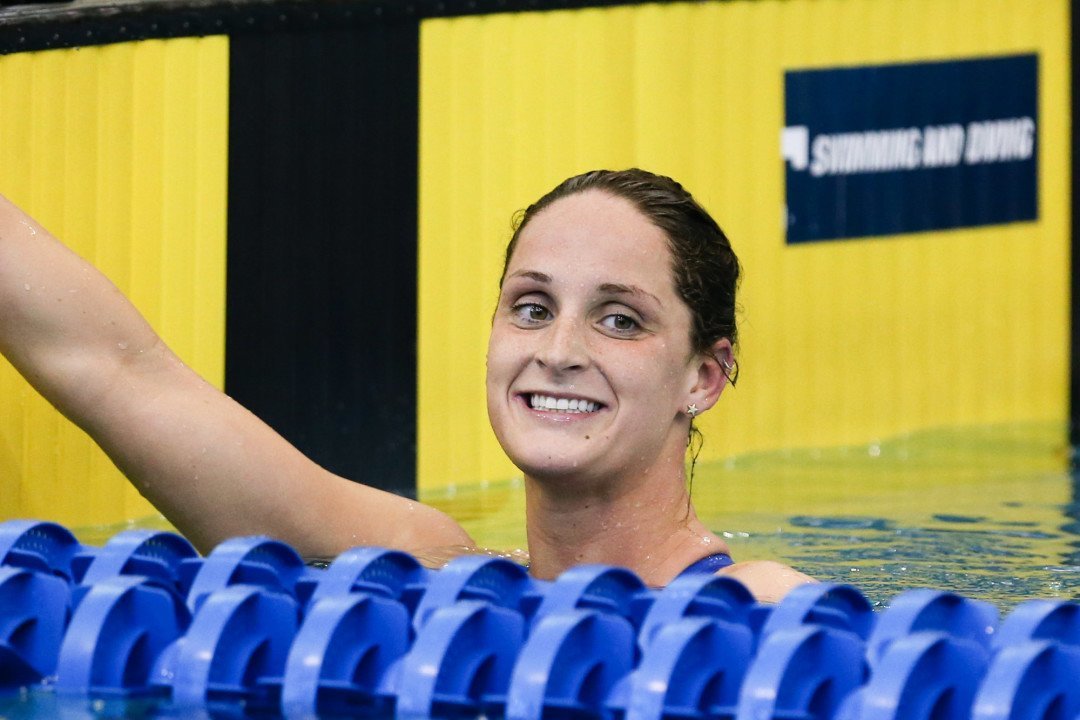 Leah Smith is positioning herself as a favorite for the American 800 free relay in Rio. Archive photo via Tim Binning/TheSwimPictures.com

Leah Smith has swum a lifetime best in the 200 free in prelims of the 2016 Arena Pro Swim Series meet at Charlotte on Friday morning.

Smith is a cog for the American 800 free relay at the Olympic Games, though it likely only matters for chasing history as compared to chasing a gold medal. In Katie Ledecky (who was a 1:54 on Friday morning at the Atlanta Classic) and Missy Franklin, Team USA has the best bookends in the world. In between, there’s some uncertainty.

Katie McLaughlin. who was in the finals relay for Worlds last year, is battling injury. Allison Schmitt, who was the Olympic Champion in the 200 free in 2012, lost her quality for a couple of years, but has shown recent signs of regaining some of her prior form.

Then, as there always is in this event, sits a long list of swimmers in the 1:57-1:59 range who will be waiting to see if they strike their tapers well enough at the Olympic Trials to get into the 1:57-low or 1:56-range that it will probably take to earn a spot on the relay.

But with this swim, sitting atop that list, is Smith, who’s had the most consistent improvement curve of the group, swimming under 1:59 in 11 different swims in the last two years, including frequently at non-championship meets. She also continues to swim lifetime bests at the right meets, the big meets, even after swimming times like the one she did on Friday morning mid-season.

At the last two NCAA Championships, Smith has finished 1st in the 1650 free and 1st in the 500 free in each season. At those same championships, she was 7th (2015) and 6th (2016). That’s led to a sense that in reality, she’s a “true distance” swimmer, rather than a “middle distance” swimmer. While she’s still very good in the 800 in long course (her time last year of 8:24.74 ranked her 3rd in the U.S.), those NCAA results don’t extrapolate to her true value to the United States, where her biggest international splashes to date have been in the 200 and 400 instead.

If the U.S. is going to take on China’s 2009 World Record of 7:42.08 in the 800 free relay, they’re going to need either Ledecky or Franklin to flat-start a 1:54, and the other to roll into a 1:54-low. That would leave the other two legs to average 1:56-low. With her swim today, and her quality on that relay at Worlds, Smith is in position to give the Americans at least one of those results.

My favorite US quartet for the olympic final would be in that order Missy Franklin/Allison Schmitt/Katie McLaughlin/Katie Ledecky.
Imagine if all 4 girls are at their top in Rio!

Schmitt will be 1:55 by Trials and there will be at least 2 other sub 1:57 swimmers at Trials. Coupled with Ledecky & Franklin, that WR is toast by at least 3 seconds.