Last One, Fast One: Two Events Wrap 2012 US Olympic Trials 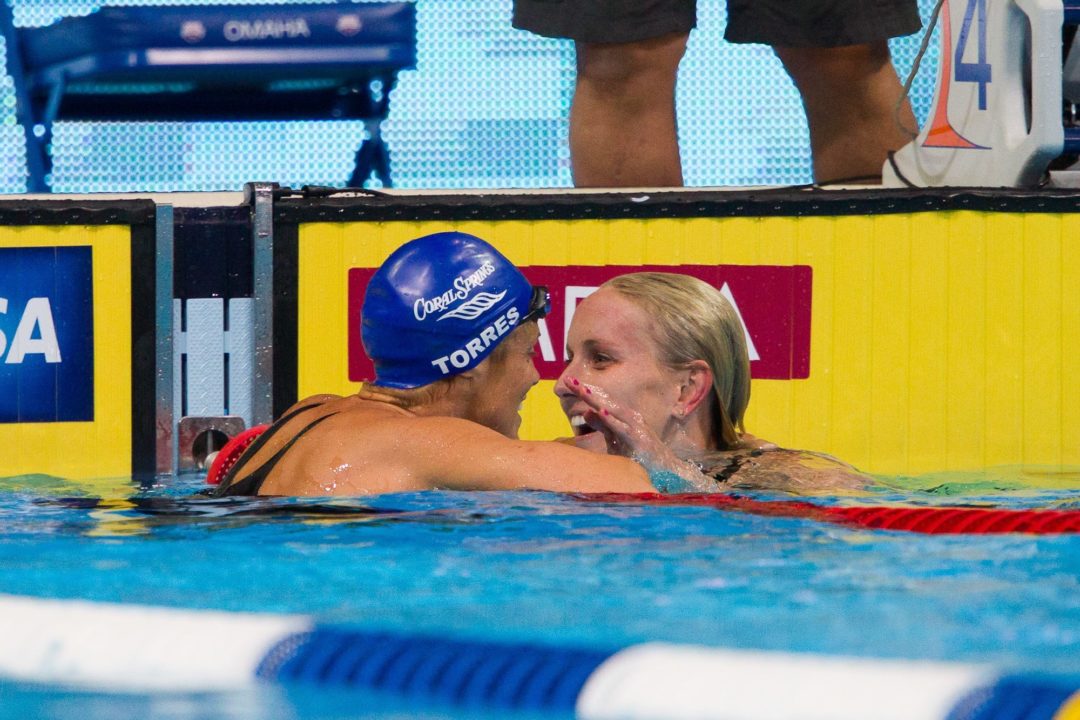 Dara and Jessica will look to continue their marvelous runs after the semi-finals. (Photo Courtesy: ©Tim Binning/TheSwimPictures.com)

It’s the last session from Omaha, Nebraska at the 2012 US Olympic Swimming Trials, and though there are just two events left, there are multiple names to be put onto the Olympic roster.

In both the men’s 1500 and the women’s 50 freestyles, it is expected that at least one new name in each race will be put up for a trip to London. Connor Jaeger in the 1500 free prelims swam an extra lap, but still broke 15-minutes for the first time in his career. Andrew Gemmell had the breakout swim in the pool that many have expected from him at his first pool taper in a few years. And the two representatives at last year’s World Championships will be gunning to prove that they were just slow-playing the prelims.

At the end of the session, we’ll get the full reveal of the entire Olympic Team and the coaching staffs.

Unless you are the deck-side camera operator and are following the fingertips of the leader, this race was impossible to call without the results on the scoreboard. But it was Jessica Hardy, using a great start, got out in front early and won her second sprint freestyle race of the meet with a 24.50. That’s the second-best time of her career, just .02 slower than she was at the 2008 Trials.

She was joined by a stunning runner-up finish from Kara Lynn Joyce in 24.73, giving SwimMAC Carolina their 5th swimmer on this Olympic Team. After things didn’t work out training with Missy Franklin and Todd Schmitz in Colorado, she made a very last-minute move to come and train in Charlotte. Though she’s sort-of familiar with the training from her time swimming under Peter Verhoef in Georgia, this move in early April still left a tough battle to get on top in time. But just like we saw when her training partner Madison Kennedy made a similar move earlier in the year (she was 5th in 25.10) it didn’t take long. Joyce will now head to her third Olympic Team, and third-straight opportunity at this 50 free.

Both of those times, though spectacular from what we’ve seen lately from the Americans, are still far from medal contention, so they’ll be digging to find another four-tenths or so to knock off of their times.

Christine Magnuson came up just short in her switch to a 50 freestyle focus, and was 3rd in 24.78. Both she and Dara Torres (4th in 24.82) weren’t able to get quite-as-good of a jump on the starts like they did in the semi-finals. Torres’ semi’s start was really a bit of a surprise anyway, but it caught up to her in this final round (though she was even better on top of the water).

Kaitlin Flederbach was 6th in 25.13; she was the biggest surprise to make this final and should springboard off of that for a great junior season at Arizona – along with her training partner Margo Geer who was 7th in 25.26. The third Wildcat, and defending National Champion was 8th in 25.42.

Fans at home struggled through constant interruptions in what ended up being a spectacular men’s 1500 freestyle, but at the end of the day two first-time Olympians roared home with Andrew Gemmell staying smooth to a 14:52.19 and Connor Jaeger taking 2nd in 14:52.51.

Those two, both 21-year olds, showed veteran fortitude after the favorite Chad la Tourette pushed the pace hard early-on. He built his lead to nearly 5 seconds at the halfway mark, but Gemmell and Jaeger didn’t flinch. They let La Tourette hold that lead until about the 1250 meter mark, slowly reeling him in. Then, the two qualifiers swam 1:55’s side-by-side to make this team, while La Tourette swam only a 2:00 to close. La Tourette (unlike the reputation of his Mission Viejo teammates in open water) has never been a great closer in this 1500, but it was amazing that his huge lead wasn’t enough. That shows the fight of his opponents.

That trio rank 4th, 5th, and 7th in the world this year respectively, but it’s still going to take at least a 14:46 to medal in London.

Peter Vanderkaay was 4th in the race in 15:03.37. He’s had a tough meet all-around, and will have only earned a bid in one event, the 400 freestyle, after coming in expected to have at least 4. He’ll still probably get a shot at the 800 free relay, though.

Joyce finally makes it in. Good for her…

Looking forward to watching the young guy Frayler in the 1500

La Tourette is a great swimmer, but his turns are just make me cringe. He’s barely getting out to the flags and he’s breathing on his first stroke.