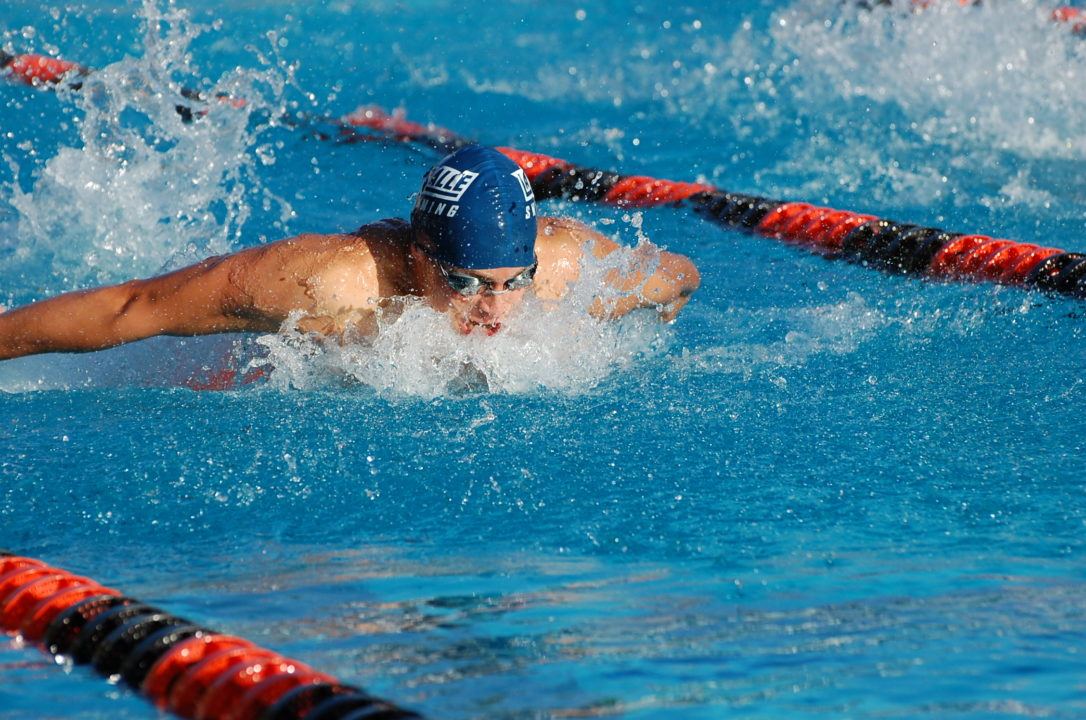 In its first swim meet since November, the men's swimming and diving team returned to form as it handily defeated Loyola (Md.), 209-89, on Monday afternoon. Current photo via Anne Lepesant

MEN: In its first swim meet since November, the men’s swimming and diving team returned to form as it handily defeated Loyola (Md.), 209-89, on Monday afternoon.

The men showed success in all facets of the meet, finished atop the leader board in numerous events. Head coach Jamie Platt showed satisfaction with the performance after the meet.

“We brought the teams back on campus on December 27,” Platt said. “Both teams have been working nonstop to prepare for the end of the year. The opportunity to get up and compete today at Loyola was not overlooked by any of the team members. I am so pleased by our approach to the last few weeks and today’s efforts.”

A pair of seniors (Fabian Bergman and Jakub Bartosiewicz) and a pair of sophomores (Marcus Forsgren and Norman Gregory) started the day with a first place finish in the 200 medley relay, touching the wall in 1:34.12.

Gregory joined Bartosiewicz in the 200 free relay along with junior Aleksandar Nikolic and freshman Daniel Johnson. Forsgren found success in the 100 free, placing first in 47.01 seconds.

Nikolic won the 200 free in 1:43.61. Explorers Kyle McElwee and Gustov Swedenborg rounded out the top three.

Sam Odtallah gave La Salle yet another first place win in the 50 free, sprinting to a 21.72 second finish.

Dylan Yurasits swept the diving events, scoring a 321.90 in the one meter and 301.50 in the three meter to cruise to two more wins.

Platt and the Explorers will look to keep their stride this weekend when they take on Atlantic 10 opponents Richmond and Fordham in New York this Saturday.

WOMEN: The La Salle women’s swimming and diving team returned to the pool for the first time since November in a meet at Loyola (Md.) on Monday. The Explorers were ultimately edged, 164-136, but were able to come up with nine wins on the day.

“We brought the teams back on campus on December 27,” head coach Jamie Platt said. “Both teams have been working nonstop to prepare for the end of the year. The opportunity to get up and compete today at Loyola was not overlooked by any of the team members. I am so pleased by our approach to the last few weeks and today’s efforts.”

Sophomore Emily Wolbert turned an impressive performance with a first place finish in the 200 fly, finishing in 2:09.69.

Platt and the Explorers head to New York on Saturday when they take on Atlantic 10 opponents Fordham and Richmond.

Sophomore Anne Hayburn and freshman Emma Schouten each won two individual races to lead the Loyola University Maryland women’s swimming and diving team to a 164-136 victory over LaSalle University at the Mangione Pool at the Fitness and Aquatic Center on Monday afternoon.

Senior Ben Cono won two on the men’s side, but the Greyhounds fell to the Explorers, 209-89.

Competing for the first time since December 2, 2017, Hayburn led the Greyhounds to a good start as she swam on the victorious 200 medley relay team. Emily Koegl, Devin Cronin and freshman Megan Dickey teamed up with her to win the race with a time of 1:49.34.

The Greyhounds closed out their victory with a win in the 200 freestyle relay (1:42.25) as Koegl, Ally Pacitti, Clarkson and Dickey won the event.

On the men’s side, Cono led the Greyhounds by winning the 200 breaststroke and the 100 breaststroke while finishing second in the 200 individual medley.

The Greyhounds return to action on Wednesday, January 24 when they host local rival Towson University at 5:00 p.m.