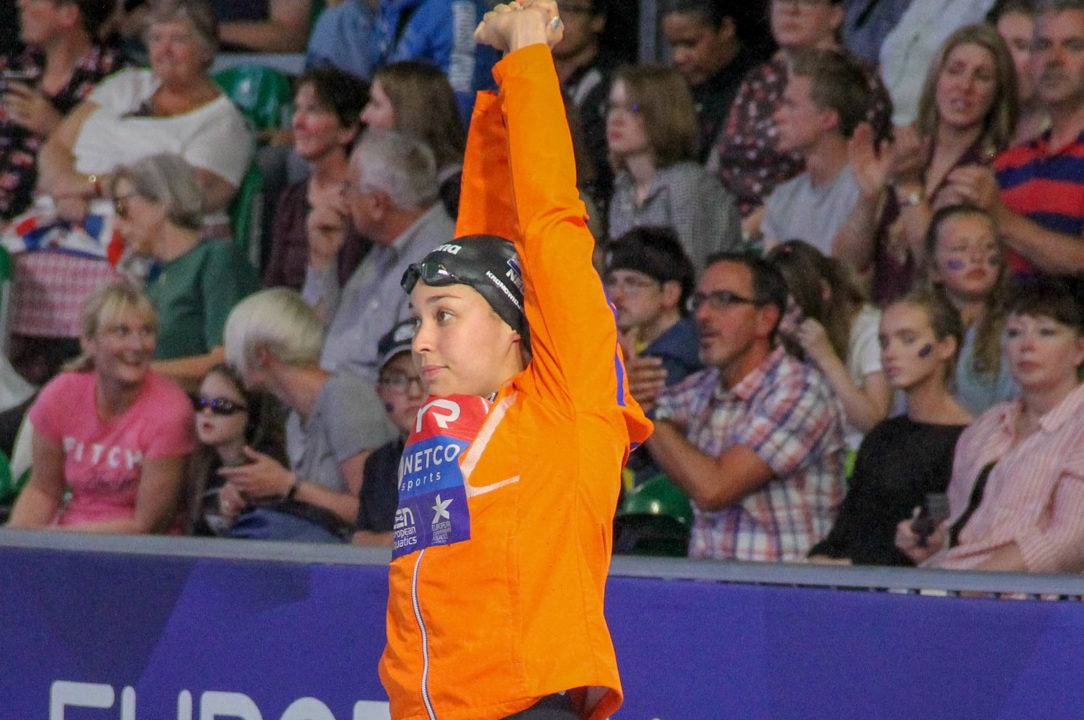 The final day of competition transpired in The Hague, with superstars Ranomi Kromowidjojo and Femke Heemskerk doing battle in the women's 50m free. Archive photo via Giusy Cisale swimswam.com

The final day of competition transpired in The Hague, with superstars Ranomi Kromowidjojo and Femke Heemskerk doing battle in the women’s 50m free. Kromo already nailed a qualifying time for this summer’s World Championships in last night’s prelims, taking the top seed in 24.65.

This morning during the finals, Kromo fired off an even faster 24.60 to further solidify her name onto the roster by beating the QT of 24.73. Although Heemskerk hit a time of 24.82 for silver, outside of the QT, per the KNZB Heemskerk has already qualified with her 24.73 from the FFN Golden Tour Camille Muffat in Marseille.

For Kromo, she now enters the world rankings at #5.

In the women’s 50m breast, both Tes Schouten and Rosey Metz hit junior meet qualification. Schouten scored a new meet record in 30.97, with Metz right behind in 31.37. With Schouten being just 18, her time also dipped under the 31.22 junior cut for the World Championships.

Kromo and Femke, a stable of Dutch swimming, and no signs of slowing down at 28 and 31.

Inspirational to no end!

They have to … not much talent coming through. A shame that Steenbergen didnt progess as expected.

Steenbergen has been struggling with injury for the last two years – hypermobility/shoulder issues.

The ranking chart has Sarah Sjostrom ranked at both #1 and #5.

Also of note in mens 50 free:
16 yo Artem Selin went 22.26, i think he could represent either Germany or Russia internationally. It would be huge for german swimming if he would decide to compete for Germany. A couple of weeks ago he went 22.4x, so he might not be done with improving for the year.