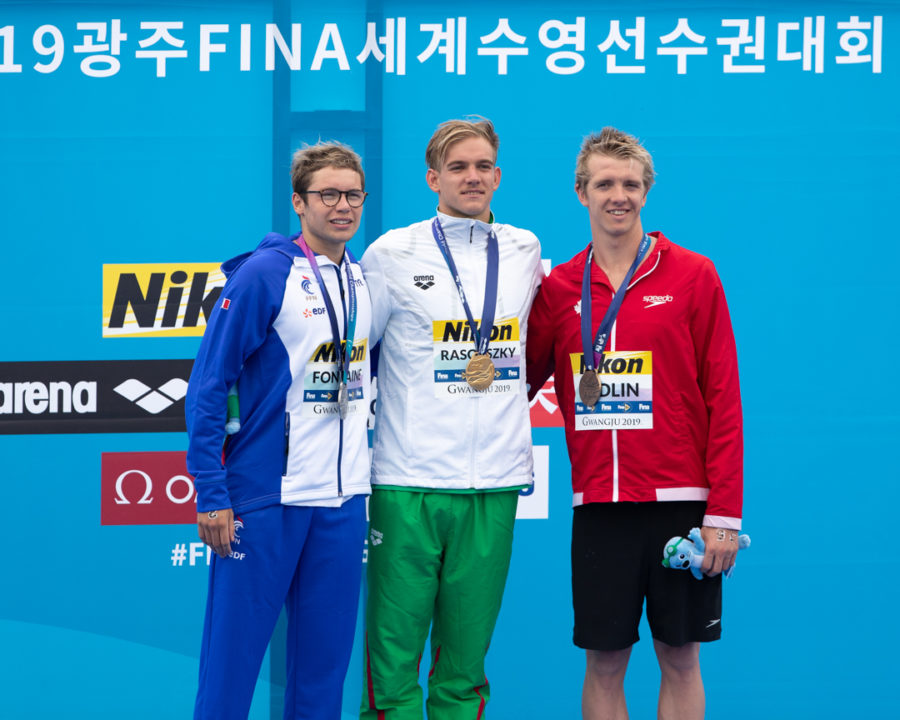 Kristof Rasovszky of Hungary won the men's 5km race on Saturday morning by 10 seconds: one of the largest margins in event history. Current photo via “Rafael/Domeyko Photography”

The Hungarians, hosts of the last edition of the World Championships, picked up the first medals of the 2019 FINA World Aquatics Championships this week at the Yeosu Expo Ocean Park. 22-year old Kristof Rasovszky won the men’s 5km race on Saturday morning in South Korea, backing up his win in the same at last year’s European Championships (where he also won the 25km race and took silver in the premier 10km race).

Rasovszky pushed the pace early before settling in to the pack on the 5th lap (out of 9), allowing Logan Fontaine to take the lead. He never lost touch with the pack, though, and on the penultimate lap, he opened up a big lead on the field (4 seconds), and inched away for a comfortable 10.1 second win.

This outcome is the largest margin of victory since the 2001 World Championships, when Italy’s Luca Baldini won by 54 seconds. Since then, all races have been decided by 2 seconds or less. The time is also the fastest-ever 5km swim at the World Championships.

Fontaine faded hard on the 8th lap, back to 10th place; but the final lap, aside from Rasovszky running away from the field, was wild. Fontaine and Hedlin charged to the front late to take the minor podium spots.

This race was missing a number of the biggest open water stars in the world – primarily because the upcoming men’s 10km race on Tuesday is an Olympic selection event. None of the 3 medalists from the 2017 World Championships in this race even raced on Saturday.

The Americans Michael Brinegar and Brennan Gravley finished 12th and 14th, respectively, at 15.0 and 15.7 seconds behind the winner Rasovszky. The United States has only won 1 medal in the 11 editions of the 5km race at the FINA World Championships: a silver from Chip Peterson in 2005.

I didn’t realise that Mellouli was still competing. I presumed he had retired a while ago.

At 2005 World Champs in Montreal, the 5k winning time was 51:17 by Thomas Lurz. As much as we want to think of these courses as being completely accurate in distance and static, there is just too much variation to rely heavily on times. That being said this was a clear demonstration of both Rasovsky’s tactical skills and closing speed, evidenced by his separation from the pack. Kudos to him on his swim and his inclusive actions post race.

I would forecast the 10k being a tighter race as it simply has more depth and experience. However, I believe Paltrinieri has the best chance of a similar (and possibly earlier) breakaway from the pack.

Why do you think that Paltrinieri could break away from the field when Wellbrock is in the same race? Wellbrock has won all world cups he entered this season and has about the same 1500 m speed as Paltrinieri. I know that most people on swimswam mainly follow the pool events, but why do you guys feel the need to comment on open water swimming when you clearly dont follow it? Wellbrock absolutely dominated the open water circuit this year and had the fastest 1500 free time in the world last year, still people think that Paltrinieri or even the hungarian guy are big favorites when all the facts clearly indicate otherwise …

Rasovszky is leading FINA/CNSG Marathon Swim World Series (10k) this year if you were thinking about this. Yes, Wellbrock won all races where he swam. It means only one race, Doha where he absolutely dominated by 1.20 s in front of Raso.
Raso has one 1st one 2nd and one 3rd place this year.
Just for the guys who mainly follow pool events.

Well done Kristóf! It was a nice prologue for the 10 km race, hope you’ll make that too! Congratulation to Szekelyi Dani as well!

What? How exactly is he supposed to dominate the olympic 10 km event when Wellbrock (who is the same age) and Paltrinieri (who is only 3 years older) (+ Weertman + Willimovsky) are in it and easily have 20 seconds over him in the 1500 free?

I was impressed. I know the frnch guy Joly was in this field and a young American Brinegar is another pool swimmer, they weren’t close.

Have those 2 ever done anything noteworthy in open water swimming … ?
Wellbrock won all world cups he entered, he clearly knows how to swim open water and has far superior speed to the hungarian guy, the same is true for Paltrinieri. Maybe the hungarian guy can challenge for bronze here.

After the race and Epic first Gold. The Story that should get highlighted. A Brazilian journalist, after hearing about Ibrahim’s struggle to get the event, asked Kristóf if he would say a few words to the Sudani athlete. (rough translation of what Kristóf said)
“Do you remember what they said before the race? Whomever participates here, and finishes the distance, are all champions, regardless of their position. You are also a champion”
After he put his gold medal in the young Sudanis neck.

Aussie boys did well . The last time I looked Bailey was like 13.

He is still in his adolescence

The broadcast was very poor. We did not know how far is the finish line during the last minutes, it suddenly appeared. The broadcaster missed the race for the silver medal. No information on the minor rankings for several minutes.

Oh dear….its might be a long couple of weeks….

The commentator actually said the leader did a few backstroke strokes to “make it easier on himself”. And that they had “obstacles” on the course, not buoys. You know, American Ninja style… *sigh*

I saw it on the Olympic Channel (US) – but I think it was British origin. I’m thrilled they even showed it, but it’s going to be hard to build an audience for open water if even the commentator doesn’t know what’s going on.

The finish for second was missed by the production people, that was really the only screw up. The announcer was good and knowledgeable he commented that he ate breakfast with the head race official who was American. Kristof destroyed the field at the end and was really dominant. I didn’t watch the whole thing, I skipped ahead many times, they could have used another announcer to interview the swimmers at the end and maybe some coaches while the race was going on.