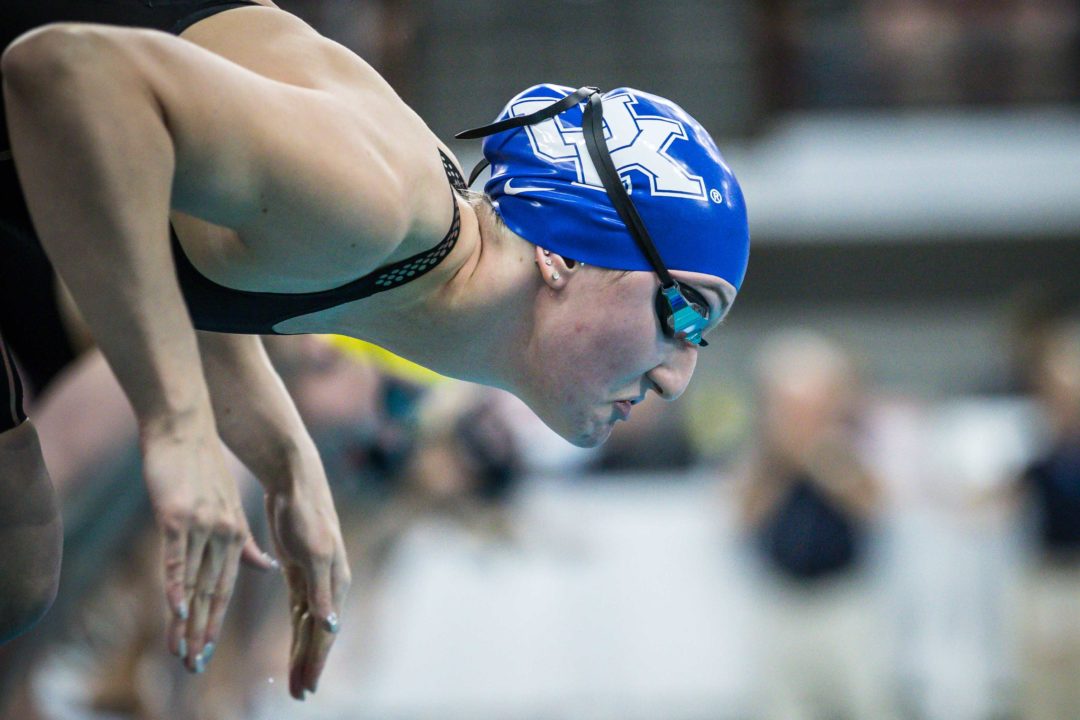 Missouri men maintain their lead going into the final session while the Kentucky women have broadened their lead insurmountably over Arkansas and Mizzou. Current photo via Jack Spitser/Spitser Photography

After dropping over a second and a half in the 100 breaststroke on Friday and nearly hitting the NCAA ‘A’ time standard, Missouri sophomore Ben Patton switched things up on the third day of the Mizzou Invite and swam the 200 backstroke, getting another NCAA ‘B’ time with a 1:44.17, missing his personal best by about half a second. Patton will go into finals seeded second behind teammate Jack Dahlgren who posted a 1:41.82, though he went a 1:39.93 at SECs in 2020.

Missouri sprint specialist Sarah Thompson posted a 48.50 to take lane 4 in the finals of the 100 freestyle tonight, though teammate Megan Keil and Kentucky’s Riley Gaines and are close behind in a tie for 2nd with 48.88. Though Thompson, Keil, and Gaines were the only women under 49 this morning they were only three of six women that hit NCAA ‘B’ times in the prelims. Arkansas’s Kobie Melton and Emily Barclay, as well as Missouri’s Alex Moderski all beat the ‘B’ standard to earn a spot in the ‘A’ final.

There was no pressure to qualify for the finals of the men’s 200 breaststroke as only 6 men swam it, one of whom was exhibition. Even so, Missouri’s Will Goodwin popped off a 1:55.81 to get the NCAA ‘B’ standard by nearly 3 seconds. This performance is about half a second shy of Goodwin’s lifetime best from 2019 and a four second improvement on his seed time.

Micah Slaton, swimming unattached for Mizzou, was the only man to slip underneath the ‘B’ cut in the men’s 200 fly, though Kentucky’s Mason Wilby only missed it by 1/10th, swimming a 1:46.79. Like the men’s 200 breast, there was no pressure to qualify for the ‘A’ final as only 8 men raced the 200 fly this morning, 3 of which were exhibition.

In addition to the races swum this morning, Saturday finals will include the 1650 freestyle, the 400 medley relay, and platform diving.