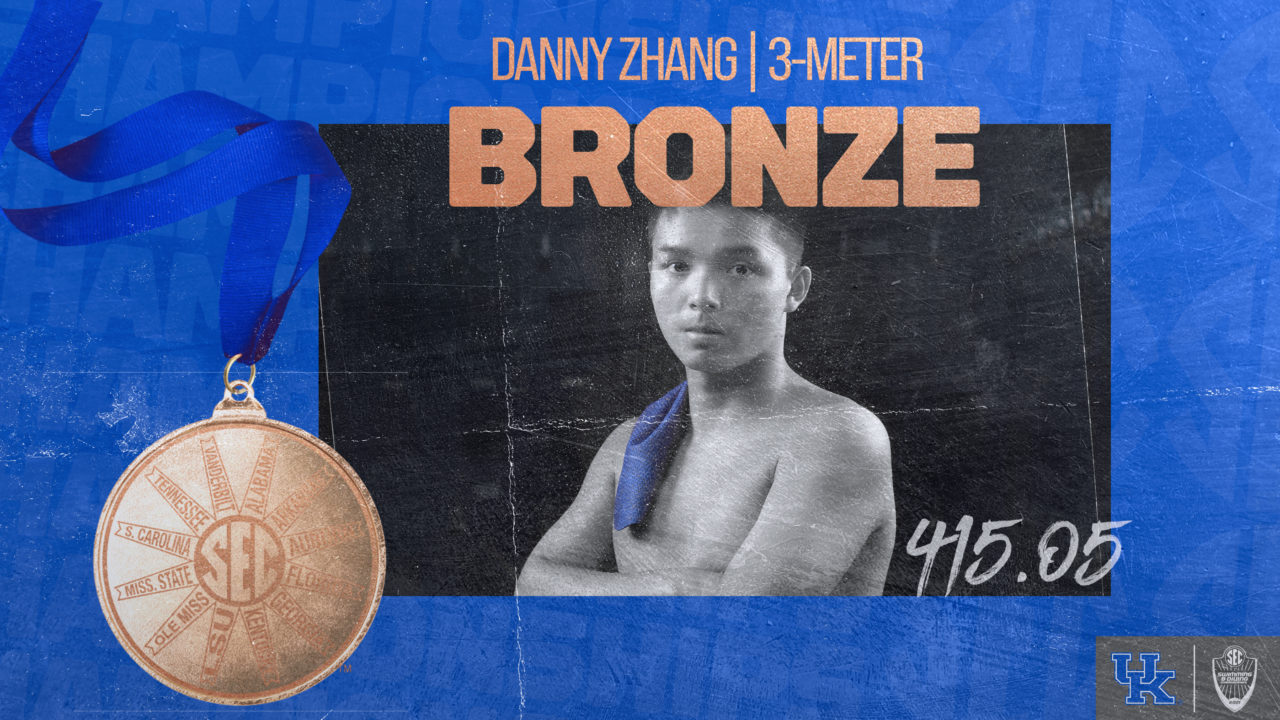 Kentucky leads the way after the diving portion of the men's SEC Swimming & Diving Championships, thanks in part to Danny Zhang. Current photo via Kentucky Athletics

Because of the concerns over COVID-19 this season, the SEC held their men’s and women’s diving championships last week, at a separate site, as compared to their usual “all-together” format for men’s and women’s swimming & diving.

The Pac-12 and ACC have been using a similar format for years, separating men’s diving from men’s swimming (albeit not necessarily with the “diving-only site), but the concept is new to the SEC.

This gives teams a better sense of what their swimming programs need to do in order to hit their desired placement overall in the meet.

The SEC men are not expected to compete for the team title after graduating 189 individual points from a 7th-place finish at last year’s meet, but a big performance by their divers could help them battle to climb the ladder.

The SEC allows teams to enter 22 athletes in the meet, in any combination of swimmers and divers, with each swimmer and diver counting as 1 athlete. The Kentucky men used the most divers at 5 to achieve their league-high scoring, but the tradeoff appears to be worth it: all 5 Kentucky divers scored, and only 15 Kentucky swimmers finished in the points at last year’s SEC Championship meet.

The number of entries a team uses on diving matters to a point. Georgia and South Carolina will be able to enter more swimmers in the meet than Kentucky and Tennessee will, but it’s pretty rare that a team scores all 22 of its entries at a conference championship meet. Last year, the champion Florida Gators came closest with 21 scorers, while Alabama had 19, Georgia 18, and Texas A&M 16.

With a guaranteed point from a legal platform finish left on the board, those teams probably won’t see a net-advantage in the swimming portion, though it’s possible.

Among the conference title contenders, which on paper includes Florida, Georgia, A&M, and Missouri, the Aggies scored the most points, thanks in large part to the conference champion Kurtis Matthew’s win on the 3-meter and runner-up finish on the 1-meter.

On the flip-side of that coin, the A&M men also was the only of those four teams that saw a decrease in diving points from 2020 to 2021.

Auburn saw the biggest overall decrease in scoring thanks in large part to the absence of Conner Pruitt. Pruitt last season as a sophomore led the Auburn men with 77 individual points (tied with senior swimmer Santiago Grassi), but he didn’t compete in this year’s events. The Tigers still scored big points thanks to Logan Andrews and Skip Donald, however.

South Carolina also lost big points, as their best diver from last year Anton Down-Jenkins was competing for UNC, where he was named the Diver of the ACC Championships over the weekend.

Oh yea the BOY VOLS are in striking position to do some damage at SECs, like our LADY VOLS did! Cant wait to watch this meet. Pulling for the beaver-tail hatted barefeeted boys from Tennessee ta whoop up on the competition. Can Houlie break 23 in the 50 breast on the 200 Medley? Can he go sub 50 in the 100?

Hate 2 but gotta “throw cold water” on ya since it appears that you don’t live in the “world of reality”: Your Lady Vols did little to no damage this past week! I think they probably finished “lower” than what was anticipated!! Y’all couldn’t even go “back -back”🙃. As I’ve said a few times before: When/if they ever go “back-back-back-back” like the Lady Ags did, then I’ll be impressed! Until then, they were “one & done” ( but then ya hafta have a “starting point”)!!
As for the men, I think they better keep real good track of that “tail” on that cap because the A&M men plan on “cutting it off” & handing it back to them so… Read more »

As much as I wish I had a clever comeback to throw in your face – I dont, well not yet anyway. You are right about the gals from Tennessee being “one and done”. BUT our BOY VOLS could be a different story – Check the score board unless I am dislexical…uhh it lookin like y’all in 5th place! Who is nipping at the heels of UK? Could it be the beaver-tailed hatted boys from the mountains o Tennessee? I still believe the Vols can finish in the top 3 at SECs with super stars like; Houlie and Mota and a bunch of other guys who I hope have not suited yet this season. Our 200 Medley will be amazing… Read more »

Troll accounts for each school are the best…