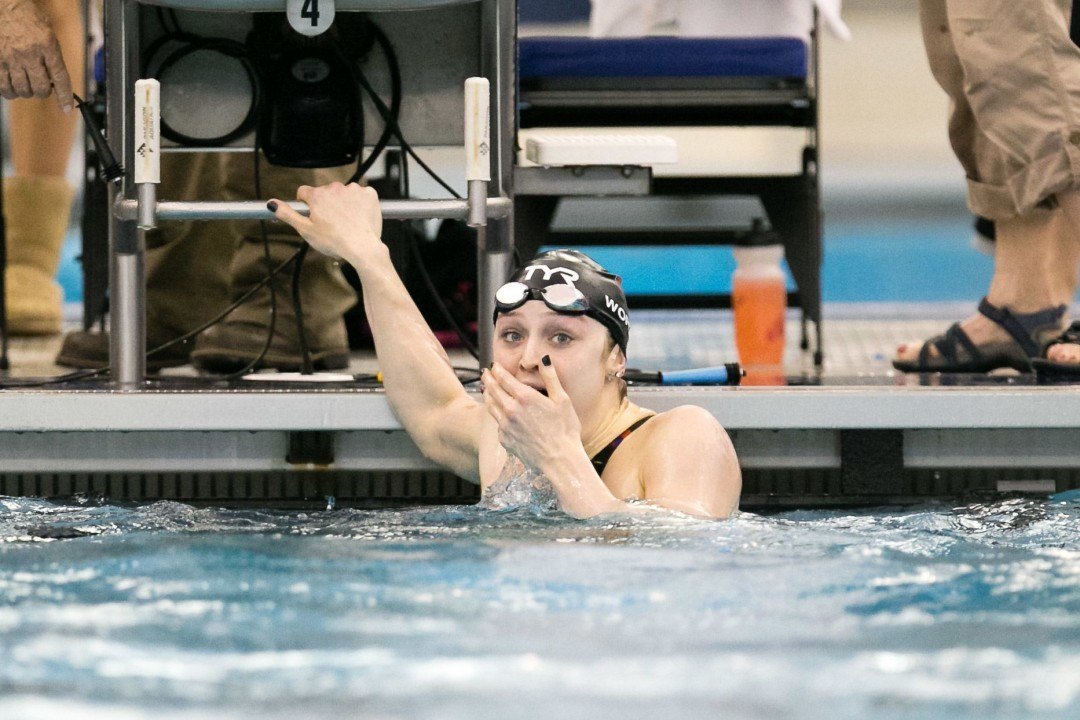 Kelsi Worrell took her second headline of the day with the fastest 100 yard fly in history. Current photo via Tim Binning/TheSwimPictures.com

On Friday in prelims at the 2015 Women’s NCAA Swimming & Diving Championships, Louisville junior Kelsi Worrell broke the NCAA Record in the women’s 100 yard butterfly, swimming a 49.89 to take the top overall seed in prelims.

That broke the 50.01 done by superstar Natalie Coughlin in 2002, which was one of the legendary records in all of swimming. Worrell became the first woman ever under 50 seconds.

This record was one of the oldest left on the NCAA Record books. In 2002, Natalie Coughlin set the record in the 100 back on the same day as this 100 fly, and those two were the oldest marks on the books coming into this meet.

Worrell didn’t really begin to pull away from the field until her third 25, but that’s where her underwaters (that have gone next-level this season) really showed up.

Coughlin’s record was the NCAA, American, and U.S. Open Record as the fastest swim in history at any level.

I agree, Fats. My son swam for Louisville. Arthur has done an amazing job bringing that program to national attention.

One thing I find remarkable about Kelsi is that she only swam a 54.56 coming out of high school. Plenty of recruits were faster. Heck, her HS 100 free was 50.8!

Her improvement is a huge testament to the Louisville program.

Her times from Nj states were never put in USA swimming data base. She was 49 and 53.

Hmmm… Joe Momma seemed worried about her LC credentials due to her soft back half… but that’s where she crushed the record.

Also, I feel like Kelsi can take it to the next level in LCM if she focuses her training there. Last year Kelsi went 50.95 in SCY and 59.18 in LCM. I think its reasonable that she could drop a second to get 58 low in LCM this year. If she can manage to knock a second off that by 2016, she has a shot for rio.

She was 58 low in december

Kelsi!!! Congrats!!! You are so awesome!

It couldn’t have happened to a nicer person.

i can’t believe how much faster they swim compared to me at college – olden times. It’s awesome!

Ok. She didn’t wait for the finals. Usually I hate when swimmers swim at 100 % and break records in prelims and then swim much lower in finals but maybe that was a good idea here. Maybe without any pressure in prelims she swam more relaxed and also maybe she knew she would be more tired tonight. And we never know, perhaps that with the record broken and without that weight on her shoulders now, she can still surprise us again in final!

Anyway, in prelims or in finals, that’s a huge and historic accomplishment to break that antique and legendary record by Natalie Coughlin and to be the first woman ever to swim under 50 seconds.

Wait for tonight. My bet is she will do it again!