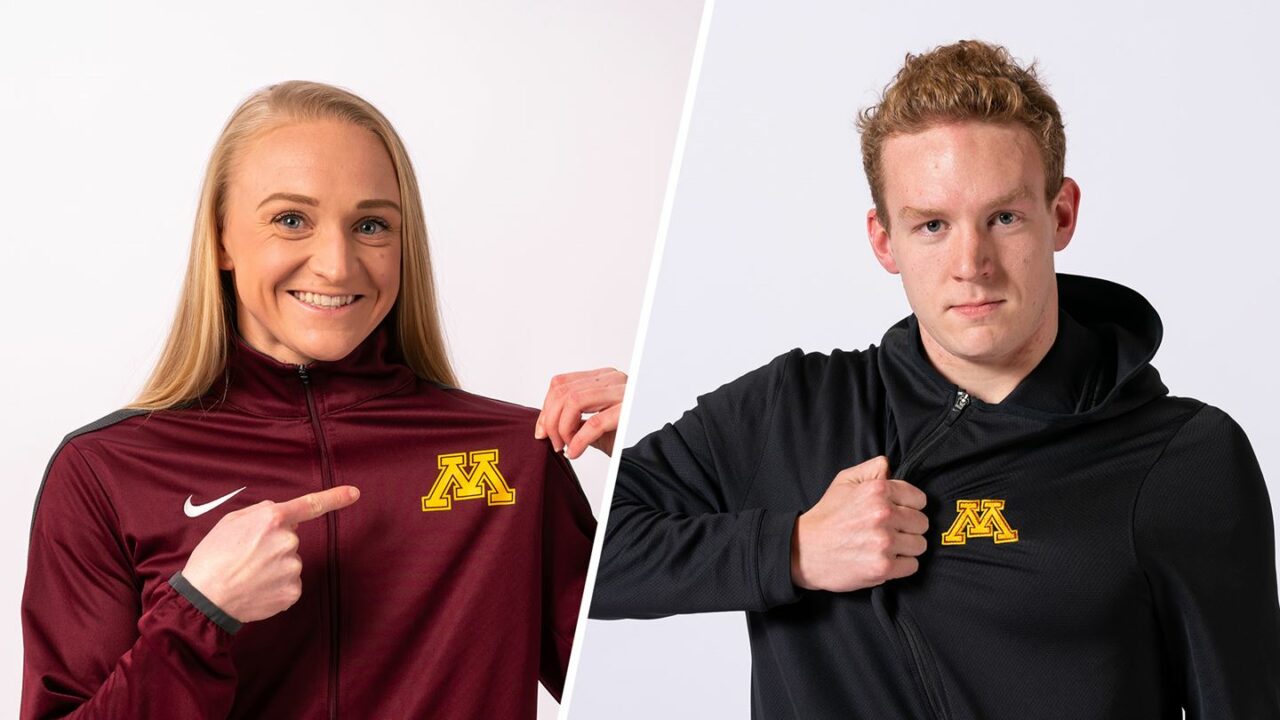 MINNEAPOLIS – Minnesota redshirt-fifth year diver Sarah Bacon and fifth year swimmer Cameron Kelley have been added as captains of the swimming & diving program for the upcoming 2021-22 season, as was announced by Minnesota head coach Kelly Kremer this week. Both will be exercising their option under NCAA guidelines to compete in an extra season of competition due to the COVID-19 pandemic this year.

“We couldn’t be happier to add Sarah and Cam to our incredible group of captains,” said Kremer on the announcement. “Both are well deserving and have both proved time and time again how strong they are as people as well as athletes. We know they are going to be essential in helping us get where we want to go this season.”

The duo will be joining the Gophers’ current captain group, which consists of Tom Donker and Max McHugh on the men’s side, and Olivia Bloomer, Emma Linscott and Kelli McCarthy on the women’s.

Bacon, who served the same role for the Gophers in 2020-21, is coming off of her best season to-date. The four-time individual NCAA champion claimed her third and fourth titles at the 2021 NCAA Championships on both springboard events, giving her three straight on the one-meter and two more than any other woman in Minnesota school history.

“I’m really honored to be selected for a second season as a captain,” said Bacon. “Another year that I can compete and lead an incredible group of divers is always a blessing. Just excited for the season to come and to see what we can accomplish.”

The Indianapolis, Ind. native has been crucial for the Gophers over her time in Minnesota, with four NCAA titles, eight All-American nods, two individual Big Ten Championship titles, two Big Ten Diver of the Year awards, an NCAA Championship record and a program record compiled in her four competitive seasons.

The 2021-22 season will be Kelley’s first in the role. The Cedar Rapids, Iowa native has been a force for the Gophers in the distance freestyle events over his career, with 16 event wins and 33 top-three finishes to show for it. His Big Ten Championship resume shines brightly as well, with two individual Big Ten ‘A’ finals appearances and five total finals appearances in the past three seasons.

“Being chosen as a captain is a pretty big deal for me,” said Kelley. “I wasn’t really a blue-chip recruit coming into Minnesota, so to be selected to lead a group of men as talented as what we have here means a lot to me. It isn’t anything to celebrate though, it’s all the work to come that should be focussed on. I just want to do everything I can to move the goal post for the team, and be as great as we can be.”

Kelley has been busy this summer as well, which he kicked off at Wave I of the U.S. Olympic Swimming Team Trials with a 19th overall finish in the 400m free. Since then, he has qualified for and made a pair of finals appearances at the Speedo Summer Championships in both the 400m and 200m free, finishing sixth and 13th, respectively.

The 2021-22 season will kick off for the Gophers in early October, when the women travel to Iowa City, Iowa on Oct. 8 to take on the Iowa Hawkeyes. The men’s season will begin the following weekend when they head to West Lafayette, Ind. on Oct. 15 for a matchup with the Purdue Boilermakers.