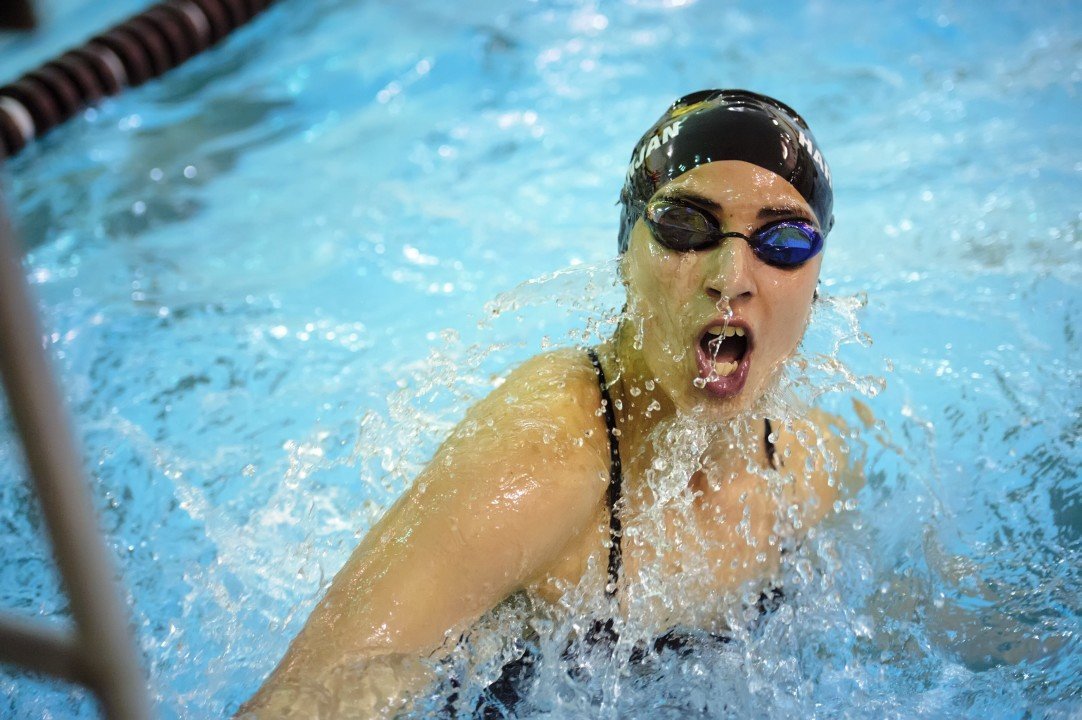 In case you missed it, check out the top 8 swims from the 2020 FINA Champions Series, which concluded in Beijing, China on Sunday. (pictured: Daiya Seto)

Wyoming downed Washington State for their 5th victory this Fall, 140-122. Wyoming only won 6 of 14 events, but used their depth to power past the Cougars.

Washington State freshman Keiana Fountaine has been blasting best times all Fall, and continued to do so at this meet. Fountaine, who came into her collegiate career with a personal best of 1:52.46 in the 200 free, won the 200 free with a 1:49.27. That marked a lifetime best, surpassing her previous lifetime best of 1:49.52, which she swam on November 3rd against Cal. Fountaine went on to win the 100 free in 51.40, narrowly out-touching Wyoming’s Isobel Ryan (51.63). Fountaine has a personal best of 51.08, which she swam against Northern Arizona on November 2nd. Fountaine also came in 5th in the 100 fly, but posted a season best of 58.73. She also anchored the winning 200 free relay (1:35.49) in 23.37, the fastest split in the field.

PULLMAN, Wash. (Nov. 9, 2018) – The Cowgirl swimming team recorded its fifth dual win of the season with a 140-122 victory over the Washington State Cougars on Friday night. It was the Cowgirls first win over WSU in four meetings.

“The meet was really fun today,” assistant swimming coach Jim Bossert said. “The ladies had three goals they wanted to accomplish which were to cheer more, have fun and swim fast and that’s what they did. Some highlights of the meet were Hannah (Mclean-Leonard) winning both the 100 and 200 butterfly. Erin (Eccelston) and Emily (Sizemore) both swam personal bests and Isobel (Ryan) continues to get better every week. We are looking forward to seeing the team tomorrow against Idaho and swimming in events they would not normally be competing in.”

UW also got a large contribution from junior Daniela Luna Rocha. She set a season best time by five seconds with a time of 10:16.55 to win the 1000-yard freestyle. She followed that up with a second place finish in the 500-yard freestyle, marking her second best time on the season of 5:03.75. In the 100-yard backstroke, the Cowgirls swept the top three spots, with two out of those three setting season best marks. Senior Samantha Burke set the pace with her second best time of the season, touching the wall in 57.00. Fellow senior Connor Tarver finished just behind Burke with a season best time of 57.05, while freshman Emily Sizemore placed third and set a new personal record with a time 57.32.

There were no diving events in this meet as Washington State does not field a diving team.

The Cowgirls will be back in action tomorrow against the Idaho Vandals. The meet is set to start at 12 p.m. MT at the University of Idaho Swim Center in Moscow, Idaho.

PULLMAN, Wash. – The Washington State swim team had an outstanding performance against the University of Wyoming, but fell to the Cowgirls 140-122. The Cougars posted seven victories including 11 season-best times.

Freshman Keiana Fountaine continued to be a force in the pool, earning two individual wins and swimming anchor in the first place 200 free relay team. Alongside teammates Emily Barrier, Paige Gardner, and Chloe Larson, the team swam the fastest time in the event this season, with Fountaine touching the wall in 1:35.49, less than two tenths ahead of Wyoming’s A-relay team. Fountaine also etched her name in the WSU All-Time Top-10, clocking in a season-best 1:49.27 in the 200 free, seventh-fastest in program history. The Tracy, Calif. native also clocked a season-best 58.73 in the 100 fly for fifth place.

Sophomore Taylor McCoy had a strong showing for the Cougars, winning the 200 back and 200 IM. The Pullman, Wash. native hit season-best times in both events, touching the wall in 2:01.58 and 2:05.44, respectively. McCoy also swam a season-best 58.05 in the 100 back for fourth place, and swam the opening leg for the second place 200 medley relay team.

Sophomore Mackenzie Duarte, junior Ryan Falk, and senior Linnea Lindberg each notched a win in their respective events. Duarte dominated in the 200 breast, hitting a season-best 2:17.23 – nearly six seconds ahead of the second place finisher. Duarte also saw a second place finish in the 100 breast and 200 IM. Falk took away a win in the 500 free, clocking a season-best 5:03.28. The Portland, Ore. native swam to a second place finish in the 1000 free and fifth in the 200 fly. Lindberg notched first in the 100 breast, touching the wall in 1:04.22 – her fastest time this season. The Stockholm, Sweden native was also a member of the second place 200 medley relay team.

Freshman Emily Barrier made a splash in the pool against the Cowgirls, taking top-three finishes in three individual events. The Fort Collins, Colo. native notched a season-best time in the 200 free, touching in 1:52.79 for third place. Barrier also place second in the 50 free with a 24.06 and third in the 100 free with a 52.29, both season-best times.

Sophomore Samantha Howell posted season-best times in her respective events. The Austin, Texas native touched the wall in 10:30.63 in the 1000 free for third place and 5:08.68 in the 500 free for fourth place.

The Cougars will compete in their final meet of the 2018 calendar year, as they travel to Houston, Texas for the Phil Hansel Invitational hosted by the University of Houston Nov. 16-18.

Nice drops even before taper!!

The woman in the picture is not Fountaine, but a former Wyoming swimmer.