Katie Ledecky to defer enrollment at Stanford until fall of 2016 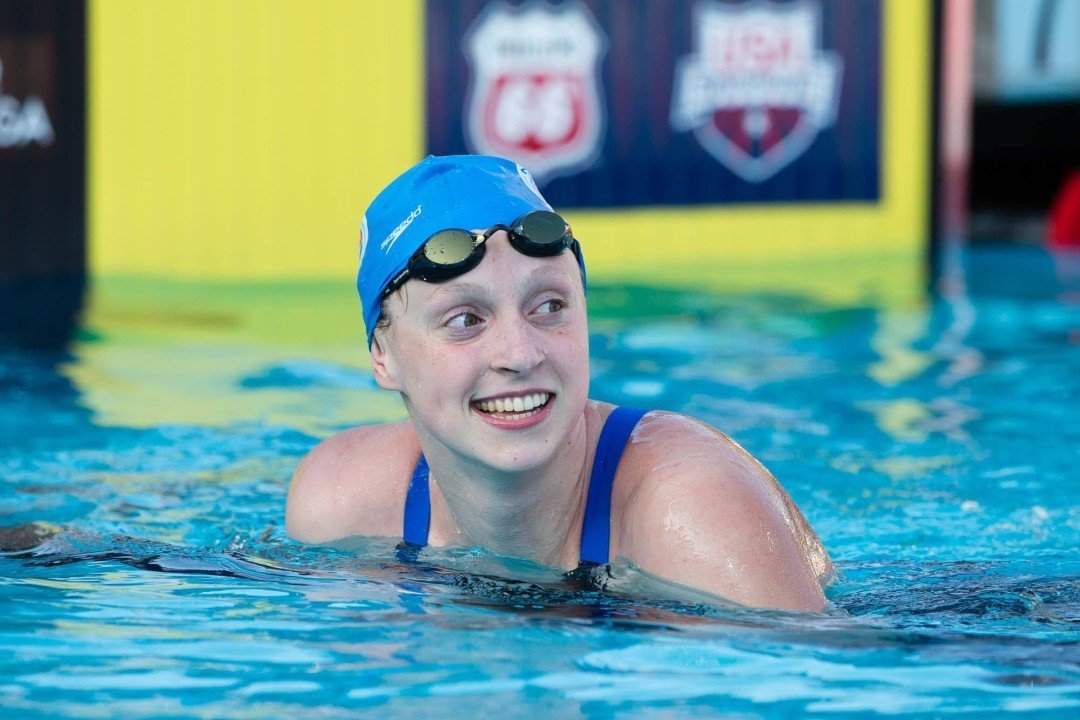 Olympic champ and all-world distance swimmer Katie Ledecky will defer her freshman season at Stanford University, instead staying at her Nation's Capital Swim Club training base through the Rio 2016 Olympic Games. Archive photo via Tim Binning/TheSwimPictures.com

Olympic champ and all-world distance swimmer Katie Ledecky will defer her freshman season at Stanford University, instead staying at her Nation’s Capital Swim Club training base through the Rio 2016 Olympic Games.

The move had been widely speculated ever since Ledecky gave Stanford a verbal commitment one year ago. Ledecky is currently the most red-hot female swimmer on the planet, continuing to smash world records in the 400, 800 and 1500 frees while moving into the elite tier of the 200 as well.

Deferring will allow Ledecky to continue training with coach Bruce Gemmell, who has helped her shatter all of those records at Nation’s Capital (NCAP). The NCAP training site that houses Ledecky and Gemmell also just hired big-time age group coach Sue Chen, and should only be getting stronger as a club in the leadup to the 2016 U.S. Olympic Trials and the Rio Olympics.

Ledecky’s decision to defer means that the top 2 prospects in her class will postpone their freshman seasons. Sprinter Abbey Weitzeil has already decided to defer her enrollment at Cal.

Here is the full press release from Ledecky’s high school, Stone Ridge School of the Sacred Heart, announcing her deferral:

Olympic Gold Medalist swimmer Katie Ledecky of Bethesda, Maryland, a senior at Stone Ridge School of the Sacred Heart, announced today that she will be deferring her enrollment at Stanford University for one year, until the Fall of 2016.  In making this announcement, Ledecky issued the following statement:

“After careful consideration and joint discussion with both my current club coach, Bruce Gemmell of Nation’s Capital Swim Club, and Stanford coach Greg Meehan, I have decided to defer my enrollment at Stanford for one year so that I may continue my training in my home environment in Maryland leading up to the 2016 U.S. Olympic Trials. I greatly appreciate the understanding, support, and guidance I received from both Coach Gemmell and Coach Meehan in helping me to reach this decision. I am thrilled and excited to be admitted to Stanford, and I very much look forward to my enrollment there as a student in the Fall of 2016 and swimming in NCAA competition as a member of Coach Meehan’s Stanford team. I also feel so fortunate that both Coach Gemmell and Coach Meehan will be serving as coaches on the USA Swimming National team staff for this summer’s World Championships.”

She has been named USA Swimming’s Athlete of the Year for the past two years, and was named the U.S. Olympic Committee Sportswoman of the Year in 2013. She has qualified to compete in five events for the USA Swimming National Team at the 2015 World Championships this summer in Kazan, Russia.

In high school swimming, Ledecky was a three-time Washington Post All-Met Swimmer of the Year, a 14-time high school All-American, and a member of the Stone Ridge Gators team coached by Bob Walker that won the Independent School League Championship in 2013 and was undefeated in league competition. Ledecky holds the National High School records in the 200 Yard Freestyle and 500 Yard Freestyle events. Ledecky, a high honors student and a USA Swimming Scholastic All-American, will graduate from Stone Ridge School of the Sacred Heart on June 4.

Pretty sure yuri coached her in 2012 not Bruce

Yuri was Ledecky’s coach through the 2012 Olympics. While Bruce has done a great job with her, she experienced her initial success and gold medal with Yuri.

Correct – Yuri coached her for years, including through the London Olympics. He went to CAL in fall 2012, and Gemmell came to NCAP at that point.

I think this was a very good decision! Maintaining world record level swimming fitness while adjusting to a new coach, new social situations, and the academic requirements of a Stanford U. education sounds like a nearly impossible task. I hope she will enroll in a couple of classes at a local college though so she will have something other than swimming to occupy her mind. Good luck, Katie!

Bobo Gigi will be happy! 🙂