Katie Ledecky, In Theoretical Meters, Has Already Been Faster Than the 800 Free World Record 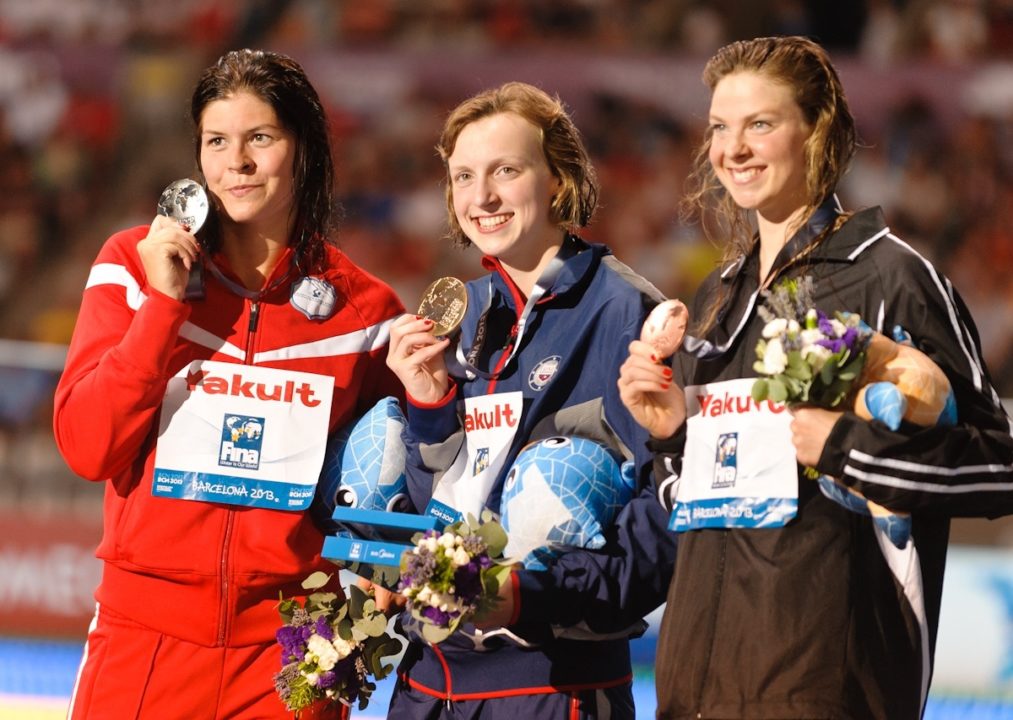 Lotte Friis (Left) and Katie Ledecky (center) were both attacking Rebecca Adlington's World Record in the 800 in the midst of their 1500s. (Photo: Victor Puig/victorpuig.com)

But the 800, we know is a great record. Rebecca Adlington’s 8:14.10 was unbelievably fast when it was done in 2008. At the time, it was a World Record by two seconds (which we used to think was a large amount by which to break a World Record.

And it doesn’t stand a chance.

After pushing each other to such great heights, Friis and Ledecky will undoubtedly be feeling a little bit of week-long fatigue. Ledecky, you’ll note, has had the 400 already, which Friis has not. Ledecky will also be coming off of the 800 free relay final, which means a late night before the 800 starts.

That’s not a slight against either, but nobody swims a 1500 that fast and pops up fresh the next morning. The good news (for us, bad news for Adlington’s record) is that they get a few days off after their 1500’s.

Regardless, look at the splits. Thanks to our earlier efforts to put the 50-by-50 splits into a spreadsheet, we were able to use some Excel magic to quickly calculate the “fastest” splits for each swimmer by compiling their best 50’s.

Yes, you read that right. In theoretical meters, Ledecky already broke the 800 World Record by two-tenths of a second.

Other interesting observations about the two’s splits: Ledecky’s best 200 meters were about 1.6 seconds faster than Friis’. That’s basically what made the difference in this race. As anyone who was watching this race could tell, Ledecky didn’t chip away at Friis. It wasn’t two-tenths here, and two-tenths there. Ledecky had about three 50’s that blew Friis away (the last three 50’s to be precise), and the two just slugged at each other the rest of the time.

Goodbye World Record. When this one is broken, there will be no women’s long course World Records left from 2008, and only two men’s.

this is the swim-nerdiest post ever.
i love it.

Chris, that was the most spot on posting ever for this site…LOL LOL Loved it!

Ah, yes. Excel magic. (Sort, descend. Or ascending, I always get those confused.)

Can’t wait to see her take it down!