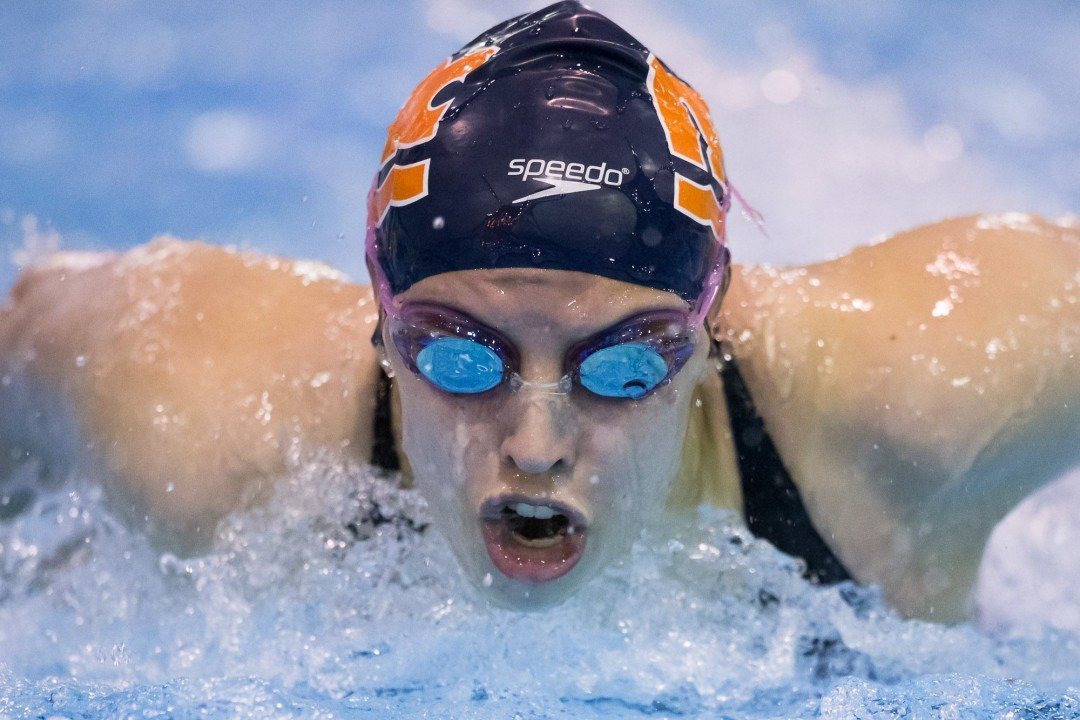 In an interview with Scott Fowler of the Charlotte Observer, the #3 recruit in the girls’ swimming class of 2015 Kathleen Baker from SwimMAC Carolina discussed, among other things, where she plans to take college visits to before committing.

According to the Observer, she has visits planned to Cal, Texas, Georgia, and Tennessee in the fall. Each prospective student-athlete is allowed to take 5 school-funded trips, meaning that she has left an opening for a surprise 5th entrant if she decides she needs it.

While those four powerhouse programs, all perennial top 10’s, won’t surprise anyone, it’s still noteworthy that there are no ACC schools on her list. Baker lives in Charlotte, the heart of ACC country.

The Georgia Bulldogs are the two-time defending NCAA Champions, and last year Cal was 3rd, Tennessee was 7th, and Texas was 9th at that meet.

Baker is a very unique prospect in her pure versatility: any team in the country, no matter how deep they are and where they’re deep, can use Baker. Look at her lineup of lifetime bests in yards:

Baker’s event lineup is unbelievably-good. She might be the most versatile all-events swimmer we’ve seen coming out of high school since Natalie Coughlin.

Wherever Baker lands, the program she chooses will be able to construct a class around her. Her decision may be made heavily on what she wants to specialize in, though, or perhaps not specialize in, and who makes the best pitch on that clause.

Texas, with the graduation of Ellen Lobb and Lily Moldenhauer last season and Gretchen Jaques after this coming season, can use Baker’s versatility everywhere. With the class they’re bringing in though – Bethany Leap (breaststroker), Rebecca Millard (sprint freestyler), and Mary Schneider (sprint free) – she’ll be most needed swimming backstroke and butterfly there, though she’d be able to contribute to all 5 relays.

Georgia, it won’t surprise as the defending NCAA Champions, needs Baker the least. However, a swimmer as good as Baker can be needed by anybody.

The program brought in a lot of very good butterfliers and backstrokers in this year’s freshman class, so if Baker doesn’t want to be a butterflier or backstroker long-term then Georgia might be a best choice.

The Bulldogs are also looking for their next 50/100/200/500 freestyle star, along the lines of Megan Romano and Allison Schmitt, to hammer their relays. Baker could become that swimmer with a 1:43.61 in the 200 yard free. She would fit right in with the Georgia free relay history.

Georgia’s biggest need is breaststroke depth – Annie Zhu is entering her junior year. After Zhu’s graduation, Emily Cameron would be the only remaining breaststroker on their roster, and Baker could be a good training partner.

Cal doesn’t really need anything in terms of strokes either, presuming their incoming freshman class works out. Baker would be a welcome addition to their freestyle group, however, especially with Missy Franklin cutting her college career short after next season.

The team that has the most to gain from a Baker signing would be Tennessee. While the Volunteers have turned out two-straight top 10 teams at the NCAA Championships, they’ve been doing it with a lot of Volunteer-made swimmers. They’ve landed a few good recruits like Faith Johnson and Michelle Cefal, but none in recent memory with the credentials or name recognition of Baker.

Dipping into the deep nearby North Carolina recruiting grounds would be a big step for Matt Kredich and crew. Beyond that, Tennessee needs her everywhere. They graduated Lindsay Gendron and Lauren Solernou after last season, and will lose Molly Hannis after next. Those three, along with Kate McNeilis and their graduated diver Tori Lamp, were a majority of the reason for the Volunteers’  7th-place finish at NCAA’s last year. If they want to stay there, they need to find a recruit like Baker who can have an impact in a hurry.

I really hope she chooses Cal!

Is Stanford completely out of the picture (were they ever in the picture?)? If she is saving one last visit, perhaps she is waiting to see if she passed admissions first before taking that last visit to Stanford. Of course, all speculation here.

Lauren Perdue at Swim Mac Elite needs to rally this talented lady to come to CHARLOTTESVILLE!!! UVA could really use her.

Kathleen is the most versitile swimmer in this class, any of these schools would benefit from her! I’m sure David Marsh’s experience as a successful college coach was helpful in narrowing her choices. Katie and Kathleen making a pan pac team under Teri McKeever stacked with Cal and Georgia swimmers will give those girls a chance to feel out those perspective teams. This could be a great opportunity for those schools to get the upper hand in recruiting.

Before this past season I would have said Cal would be great for her but after seeing Melanie Margalis have an outstanding year at Georgia and seeing Kathleen’s potential in almost all strokes I say Georgia would be a great fit for her.
Texas would be great as well, as she would become a valuable relay asset across all distances .

Haha this page has turned into a marketing campaign. Kathleen, if you read this, call 1-800-GOBEARS to sign your letter or intent! Limited time offer and must be over 18 to apply.

It’s great to be a Tennessee Vol!

Georgia needs Kathleen. they have the needs mentioned in the article plus her ability to swim 4 relay events. The Dawgs have a proven staff of coaches that really deveiop their swimmers. Plus her family would be able to attend several events. Go Dawgs