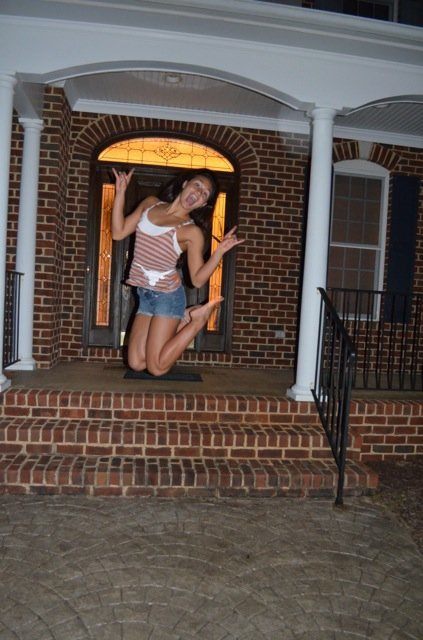 Remedy Rule was "jumping for joy" when she decided to commit to the Texas Longhorns. Current photo via Remedy Rule

Carol Capitani is putting together a second-straight strong recruiting class at the University of Texas, adding a verbal commitment from Junior National Team swimmer Remedy Rule on Sunday.

Rule will be a focal point of the Longhorns’ rebuilding efforts, and when combined with their current freshmen and other commitments in the class of 2015, should give the Longhorns strong medley relays for years into the future.

The high school senior is a top-tier recruit everywhere besides the breaststrokes, and she’s good enough even there to make for solid IM times.

Her best races are the backstroke and butterfly events, and it’s the 200 meter fly where her 2:11.24 earned her a spot on USA Swimming’s Junior National Team. That swim was done in January at the Austin Grand Prix – perhaps foreshadowing of the decision to come. In fact, her best time in the 100 meter fly (1:01.08) also came at that meet.

In yards, Rule’s best swims include:

Most immediately, the Longhorns will need her as a butterflier. Until something drastic happens to shift the power in the Big 12, any conference contributions aren’t very relevant for Texas, but Rule is good enough to qualify for NCAA’s as a freshman. They graduated their two best form last season (Lily Moldenhauer and Ellen Lobb) and their next best is a senior this year (Gretchen Jaques).

The Longhorns’ cupboard isn’t entirely bare there, as they have sophomore Brynne Wong (53.70 last year) and freshman Mimi Schneider (who was a 53.57 in high school). Rule’s presence, though, allows Schneider to focus more on the sprint freestyles, though she probably won’t give up much of her fly training, and will put that butterfly leg down to Rule and Wong.

Remedy Rule gives Texas a lock-down butterflier of the future.

With Bethany Leap on the breaststroke leg and Tasija Karosas on the backstroke leg, the Texas medleys should hold the lofty standing that they’ve taken at NCAA’s the last few years – including 6th in the 200 last season.

Capitani’s next big target should be a backstroker, and specifically a sprint backstroker. Karosas is a solid fill there, but there’s not much depth, and Karosas’ better events are the longer distances.

Capitani has also gotten a verbal commitment from Brooke Hansen of Arizona.

She will apparently be joined at UT on the men’s side by Mason Tenney of Nitro who also announced committing to the Horns. And Tate Jackson of Nitro will be joining his brother at Notre Dame.

I heard that Quinn Carrozza committed to Texas as well?? Have you heard anything?

Quinn is committed to Arizona.

Larry – many of the Texas swimmers have Tweeted this morning that Quinn has changed her commitment. We have been working on pinning her down all day to confirm, but she’s still in school.