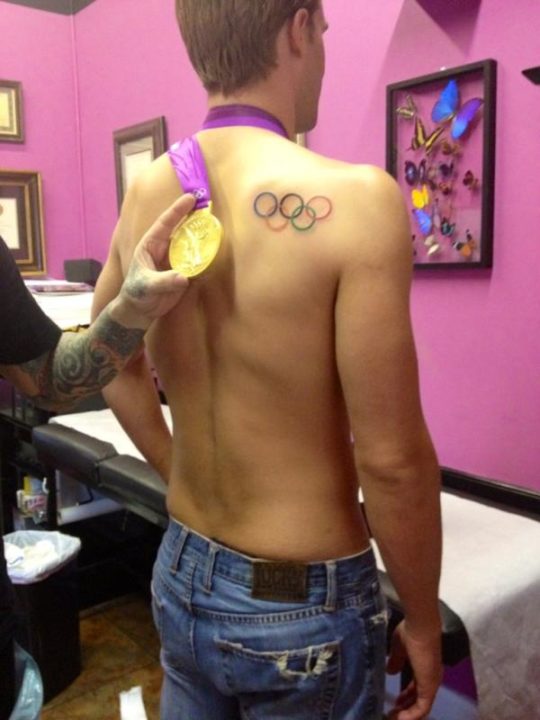 A tattoo violation prevented British swimmer Josef Craig from competing in one of his finals on Day 1 of the 2016 IPC Swimming European Open Championships (unrelated picture of Olympic rings tattoo). Archive photo via courtesy of Nick Thoman

The IPC Swimming European Open Championships kicked off in Funchal, Portugal yesterday where over 450 athletes from 50 nations are participating in the meet’s 4th edition. Besides the record-breaking swimming taking place in the pool, another story also took shape yesterday regarding one swimmer who was not able to swim in his final.

After successfully qualifying through heats, British swimmer Josef Craig was due to compete in the S8 100m freestyle final yesterday evening. However, citing the IPC rule stating that ‘body advertisements are not allowed in any way whatsoever (this includes tattoos and symbols)’, Craig was disqualified from the event due to failing to cover up a part of his tattoo.

The graphic, which appears on his chest’s left side, features a lion with the Olympic Rings beneath it. The rings were the piece in specific violation of the meet’s rules, as they are ‘exclusive property of the International Olympic Committee.’ As such, they are a protected mark and cannot be used without the IOC’s prior consent.

19-year-old Craig, who suffers from cerebral palsy, was able to cover up the rings in time for his S8 400m freestyle final and can continue to compete at the meet provided his tattoo remains covered.

Thank you for using my picture in this article. This disqualification is ridiculous and unjust.

The IPC continues to prove that they are far more invested in their rules (regardless of how ill-conceived) than their athletes. They defend a classification system that clearly has flaws since athletes receive different judgements depending upon their classifiers. Lives are made and ruined by the inconsistency of classifiers with no medical background making medical assessments. Certain organizing committees manage to push through questionable athletes while others are deemed “classed out” when they clearly have a well-documented history of disability. And then, of course, we have the old rules and the new rules. There is no level playing field between the two.
Defend your athletes, IPC, like you do your classifiers and your errant rules!
The Olympic rings… Read more »

Very well said Paraparent. However the IPC only follow their rules as and when it suits them to. Let’s DQ over a tattoo but ignore annual review of short statured minors because that makes a whole lot of sense and won’t affect competition in Rio at all for example.

The classification system used is woefully inadequate for neurologically impaired swimmers e.g Cerebral Palsy and Josef Craig himself fell foul of this being classed up from S7 (he was 2012 Paralympic Champion S7 400fr and all the trappings that came it). The thing is, CP doesn’t actually get better, if anything functionality decreases in many over the years. Was the S7 class wrong then or is the S8 wrong? Your… Read more »

This is pretty ridiculous, shows the IPC gives no support to their athletes. Why not instead of worrying about people with tattoos, they worry about their classification system.

sorry for another comment, but anyone know how he “covered” his tat? did he just use permanent marker over it?

Wow, US swimmers would be SOL… i think every single one has the oly rings in visible areas. or at least their college symbol, that could be counted as advertising too. this is insanity.

How has no one been DQ’d for this before if this is a rule?

Some of these swim administrators need to extract their heads from their rear ends. It’s like judges that DQ 6 year olds.

as a former coach, thanks for doing that. i agree with you.

I agree, all about the power trip. Dqing a 6 yr old doesn’t change their stroke, their coach does that. It just cheats a 6 yr old working their hardest out of a time.

That’s obviously not what I’m talking about. I’m talking about the official who looks for reasons to dq young swimmers. I would expect someone to dq a 6 year old for the doing the wrong stroke, just not having their foot turned a certain way because their body hasn’t quite developed yet. If it gives them an unfair advantage in the race, fair, if not leave them be. They have their whole 7/8 year old career to have their hopes dashed.

I don’t think that word (“cheat”) means what you think it means. Your attitude, however, cheats the child through the tyranny of low expectations.

Ooooh, you got me.

Which iz why buttocks are the only place for this tat . Noone cares if you’ve been to an Olympics but it might impress someone special some day .

Ok
Every mornong I wake up before I put on my make up.

Forever forever they’ll stay in my heart ,
I will love them Forever Forever ..

Is that enough caring?