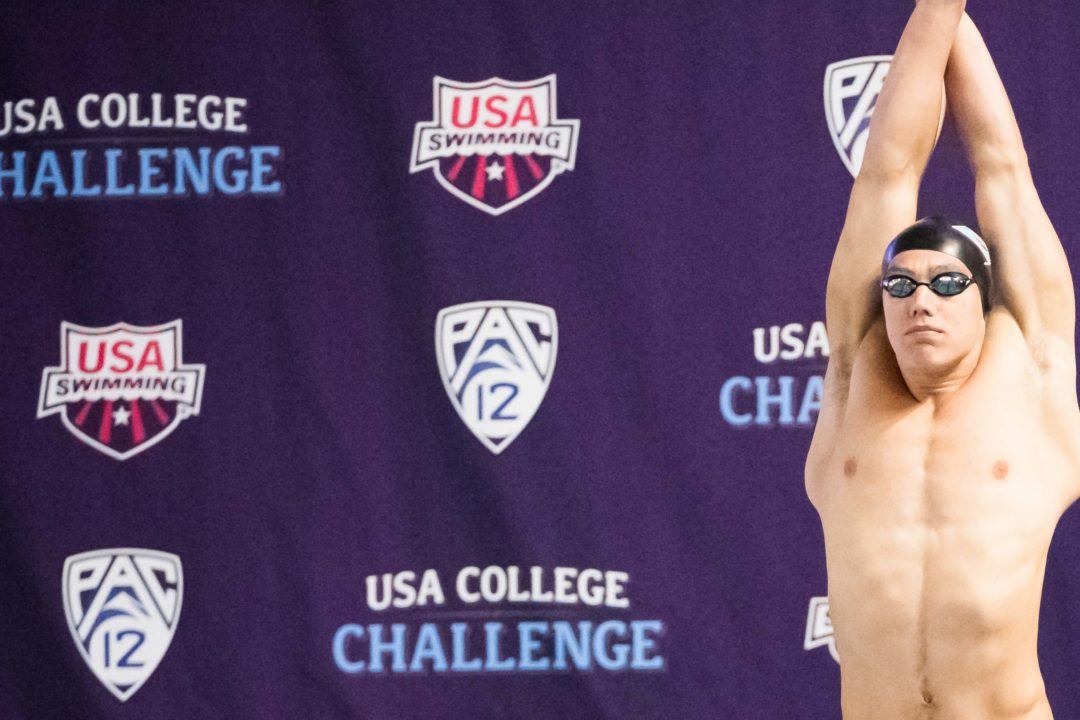 Jensen won the individual 100 free in 43.07 before leading off the winning 400 free relay in 42.99. Archive photo via Mike Lewis/Ola Vista Photography

The Cal men and women eached picked up a win at home last weekend against Pac-12 rival Arizona State. Andrew Seliskar pulled off a successful double for the Bears, first facing off with All-American teammate Michael Jensen in the 200 free. Jensen had the edge up front, 47.19 to 47.47, but Seliskar came back on the 3rd 50 to take over the lead and win it in 1:35.73 to Jensen’s 1:36.30. Not far behind was Arizona State standout Cameron Craig in 1:36.79.

Zheng Quah and Carson Sand also brought home multiple wins for Cal. Quah used his front-half speed to clip freshman teammate Daniel Carr, 47.60 to 47.75, in the 100 back. He returned for the 100 fly, this time coming from behind on the back half as he out-touched Arizona State All-American Andrew Porter 47.63 to 47.89. Sand picked up a sweep of the breaststrokes, turning in winning times of 54.09 in the 100 breast and 1:58.71 in the 200 breast.

Another notable swim came from Cal’s Abbey Weitzeil in the 50 free. Weitzeil the American Record holder in the event, turned in a 22.20 for the win.

BERKELEY – Just a few weeks removed from training at altitude, the Cal men’s swimming and diving team returned to competition in emphatic fashion as the Bears touched the wall first in all but one event to earn a 158-133 dual meet win over Arizona State at Spieker Aquatics Complex.

Having returned from its annual trip to Colorado Springs with the focus still on hard training each day, Cal got back into race mode Friday against an Arizona State squad very much on the rise.  A win in the first event of the day, the 400-yard medley relay, featured the team of Daniel Carr, Connor Hoppe, Justin Lynch and Ryan Hoffer as the quartet swam to a winning time of 3:11.60 to get the Bears started.

Nick Norman kept Cal in the winner’s circle in the next event, jumping out to an early lead that he would never relinquish to win the 1,000 freestyle. Norman’s time of 9:00.04 is Cal’s fastest of the season and dropped over 12 seconds from his time against Stanford in November.

The 200 freestyle featured three of the top swimmers in the Pac-12 as Cal’s Michael Jensen and Andrew Seliskar squared off with Arizona State’s Cameron Craig. Jensen established a narrow lead by the 100-yard mark but Seliskar took the lead back by the 150, swimming to a time of 1:35.73 to edge Jensen, who finished second.

With temperatures beginning to drop, Cal finished strong after the final break of the day as Seliskar led a 1-2 Cal finish to the wall with a time of 3:49.78 in the 400 IM. Cal’s 400 free relay team of Jensen, Lynch, Quah and Mefford also touched first, swimming to a time of 2:55.27.

“Arizona State is a much improved team and has some really good swimmers. I thought our guys that may have been racing a primary event, secondary or third or fourth event for them, were really nice and consistent throughout the meet,” Cal head coach David Durden said. “It got a little bit colder and there was definitely that as adversity to handle and manage but they didn’t get slower as they went through the meet, which was really good to see. There’s 20 different things they could complain about throughout the course of a meet, maybe not swimming a primary event, maybe not swimming an event they’re good at but they handled that and did a really nice job.”

Cal’s divers were also in action at Legends Aquatic Center with the Bears and Sun Devils competing on both the 1 and 3-meter boards. Sophomore Connor Callahan posted a season-best mark of 349.13 to finish second in the 1-meter and followed that with another season-best in the 3-meter, scoring 359.48 to take third.

Cal’s effort Friday set the tone for a busy weekend in Berkeley. The Bears will test both their recovery skills and their depth on Saturday at noon when they line up for another Pac-12 dual meet against Arizona.

Cal, which was racing in competition for the first time in nearly a month, closes out its home campaign Saturday when the Bears host Arizona at noon. The meet serves as the final home appearance for four seniors – Valerie Hull, Jasmine Mau, Maija Roses and Noemie Thomas.

“Overall, we did a nice job but I can see we need to work some cobwebs out as we get back into racing after a tough training spell,” head coach Teri McKeever said. “I think our top end performed well. We need to keep working on our depth throughout the lineup. Tomorrow will be special for our four seniors and we’re looking forward to recognizing them for all they have done for our program these past four years.”

Makikallio’s 3-meter score was his highest of the season by 11 points while McCool’s 3-meter was her career-high.

The Sun Devils have another tough test in the Bay Area on Saturday vs. No 5/3 Stanford at 1 pm MT/12 noon PT.

Saturday’s meet will be broadcast on Stanford’s Pac-12 Plus live stream: http://pac-12.com/live/stanford-university.

200 Medley Dark horse for the win – Tennessee with Stevens 22.0 breast leg, all comers will be chasing at the halfway mark!

Abbey Weitzeil seems to be on the right track again.