Japan is one of history's great swimming powerhouses. Their men sit fourth on the all-time medals table, and their women eighth. From the 1930s until the 1960s Japan was one of the top nations in every discipline in swimming, but since then hasn't produced any top swimmers in the freestyle events at the Olympic Games. Archive photo via Scott Davis 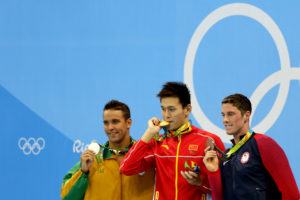 Japan is one of history’s great swimming powerhouses. Their men sit fourth on the all-time medals table, and their women eighth. From the 1930s until the 1960s Japan was one of the top nations in every discipline in swimming, but since then hasn’t produced any top swimmers in the freestyle events at the Olympic Games.

The last freestyle medal earned by a Japanese male swimmer at an Olympic Games was way back in 1960, however after this week’s Japan Open, it’s evident that things could be changing in a positive way for Japanese freestyle.

Note: while not the focus of this piece, the Japanese women have only won 1 Olympic freestyle medal ever, when Ai Shibata won the women’s 800 free in 2004.

THE FREESTYLE DROUGHT AT THE OLYMPIC GAMES

Since 1952, only once Japanese swimmer has made an Olympic final in the 100m freestyle. Atsushi Tani did so at the 1956 edition of the Olympic Games. He finished seventh in the final with a time of 58 seconds.

A Japanese man has never medalled in the 200m freestyle either. The only time a Japanese man was ever present in an Olympic 200m freestyle final was back in 2008 when Yoshihiro Okumura finished seventh with a time of 1:47.14. In 2012, the final once again was without a Japanese swimmer – because they didn’t even bother entering one.

The 400m freestyle proves to show a similar trend, as Tsuyoshi Yamanaka is the last 400m freestyle Olympic medallist for Japan. He picked up the silver at two consecutive games, medalling in 1956 and 1960. He made the final at the Tokyo games in 1964, however failed to medal with a sixth place finish.

Japan has a slightly better tradition in the 1500m freestyle. The last medal came in 1956 by Tsuyoshi Yamanaka. Their most recent finalist was Masato Hirano who was sixth at the 1996 games in Atlanta.

THE FREESTYLE DROUGHT AT THE WORLD CHAMPIONSHIPS

Since the first World Championships in 1973, only two Japanese swimmers have ever medalled in a freestyle event. The first was Tomohiro Yamanoi in the 50m freestyle.

Yamanoi tied for the bronze medal at the 2001 Fukuoka World Championships with famed South African sprinter Roland Schoeman. That was the only major international medal he would ever receive besides a silver at the Asian Games.

Yamanoi ended the 29-year World Championship silence in the freestyle events for the Japanese, however after his showing it seemed that the drought would continue, then came 2013.

In 2013, Olympic bronze medallist Kosuke Hagino emerged as a multi-event threat and sparked hope in the eyes of Japanese freestyle.

At the World Championships in 2013, Hagino finished second in the 400m freestyle, being the first Japanese swimmer to medal at a major international competition in that event since 1960.

Japan’s performance last year at the 2014 Pan Pacific Championships made it very clear that they have tons of potential in the freestyle events heading into the Olympic year.

Much of their success was due to that of Kosuke Hagino who swam very solid times in the 200 and 400m freestyle events to claim two silver medals.

Hagino wasn’t the only highly-ranked Japanese swimmer in the freestyle events. Shinri Shioura was ranked 13th in the world in the 50m freestyle with his time of 21.88 from Japanese nationals. With that time he was just 0.22 seconds off ranking top eight in the world.

Shioura also was ranked 24th in the world in the 100m freestyle with a time of 48.69. He also swam that at Japanese Nationals in April.

One more Japanese swimmer other than Hagino was ranked top 10 in the world in a freestyle event for the 2013-2014 season, and that was Kouhei Yamamoto. Yamamoto’s time of 14:54.80 from the 2014 Japan Open ranked him 10th globally, and truly puts him in the mix heading into the Olympic year.

CONTINUED IMPROVEMENT IN 2015/ THE FUTURE

Heading into the 2015 World Championships and the 2016 Olympic Games, Japan is showing some definite promise in the freestyle events.

This past week at the Japan Open, some very fast times were put up that might put some Japanese swimmers in consideration for freestyle medals.

Shinri Shioura was very dominant in the 50 with a time of 22.04 to claim gold. That time ranks him 12th in the world this season. Katsumi Nakamura was second in 22.27. Both swimmers beat American sprinter Anthony Ervin which is always a tough feat.

Nakamura won the 100m freestyle over Shioura, but the most impressive part about his win was the fact that he set a national record and swam a very solid in-season time. Nakamura’s time of 48.41 showed just how steadily the Japanese are improving. Shioura was second, also with a great mid-season swim of 48.79.

Not only was Nakamura’s time a national record and personal best, but it ties him as the eighth fastest swimmer this season in the event.

Looking at the longer end of the freestyle spectrum, although Kosuke Hagino isn’t a distance freestyler, he was able to pull off an incredible 1500 swim with a time of 15:05.35. Some of the best distance swimmers in the world are sitting at times in that range at this point in the season, which points fingers saying that his endurance is incredible right now and he’s putting in a ton of work.

At this point of the season, the only Japanese swimmer ranked top five globally in a freestyle event is Hagino. He’s ranked third in the 200 freestyle and fifth in the 400 free.

Looking at the top 10 however, is where you can truly see the difference maker in Japanese freestyle. Hirai Ayatsugu is currently ranked 10th in the world with his 15:01.78. That time is just around four seconds shy of putting him in the top three. Kouhei Yamamoto is ranked 11th in the event. Hagino is ranked 14th. One more Japanese swimmer cracked the top 25 with Syogo Takeda’s 15:11.15 that ranks him 23rd.

Now, Japan has some solid shots at medals this summer in freestyle events. Hagino looks dominant in the 200 and 400 freestyles, especially with Park Tae Hwan out of the picture. With that solid 1500, it’s either for training, or because he’s putting in a lot more freestyle work. Either or, he should be able to grab a podium spot in either of the middle-distance races.

Nobody else from Japan is exactly within striking distance this year of a medal, but there is a reason that a race isn’t settled on paper. There’s possibility, but the bigger possibility for the young Japanese freestylers is 2016.

There, it looks like Hagino could end a long medal drought in the 400 and 200 freestyles, maybe even the 1500 if he chooses to go that route heading into Rio. His strength in the IM and love for a multi-event program including backstroke events will most likely stray him away from the 1500.

The young sprinters could be medalling in 2016. Nakamura is showing huge improvements, however he’s still going to need to make big drops if he wants to see some Olympic hardware. The same thing goes for Shioura.

Ayatsuga Hirai and Kouhei Yamamoto are definite medal hopefuls for Japan in the 1500 free. They’re climbing the ladder of the world rankings and doing so fast, so there’s no telling where they or the world will be in a year from now.

Japan has hope, and their team has room for growth and development heading into 2020 even. The Japanese freestyle drought could end, and Hagino could be leading the charge just over a year from now at the Olympic Games in Rio.

Currently 10 Japanese swimmers are ranked in the top 25 globally in a freestyle event.

Both in the 400 and 1500 freestyles, Japanese swimmers make up 16 per cent of the top 25. They’re showing great progress in those events.

note* Shioura, Hagino, Hirai, Miyamoto, and Kobori are all going to the World Championships this summer.

I think Kenta Ito should be recognized. He’s up there with the big guys as well

I know that Japan has already announced their World Championship Team and that Kobori, Amai, Shioura and Nakamura were listed as “relay swimmers”. I also realize that their chances of winning medals in the 50/100/200 free are not very good. What I don’t understand is why they wouldn’t be entered in individual races in addition to their relay duties. Can anybody explain that to me? Also, since other countries (eg: Poland) are still qualifying athletes for Kazan, and in light of Nakamura’s performance at the Japan Open, is it possible we might see any changes in Japan’s entry to the World Championships? If I am not mistaken, despite their rankings, Miyamoto, Ehara, Hirai, Yamamoto and Take a will be attending… Read more »