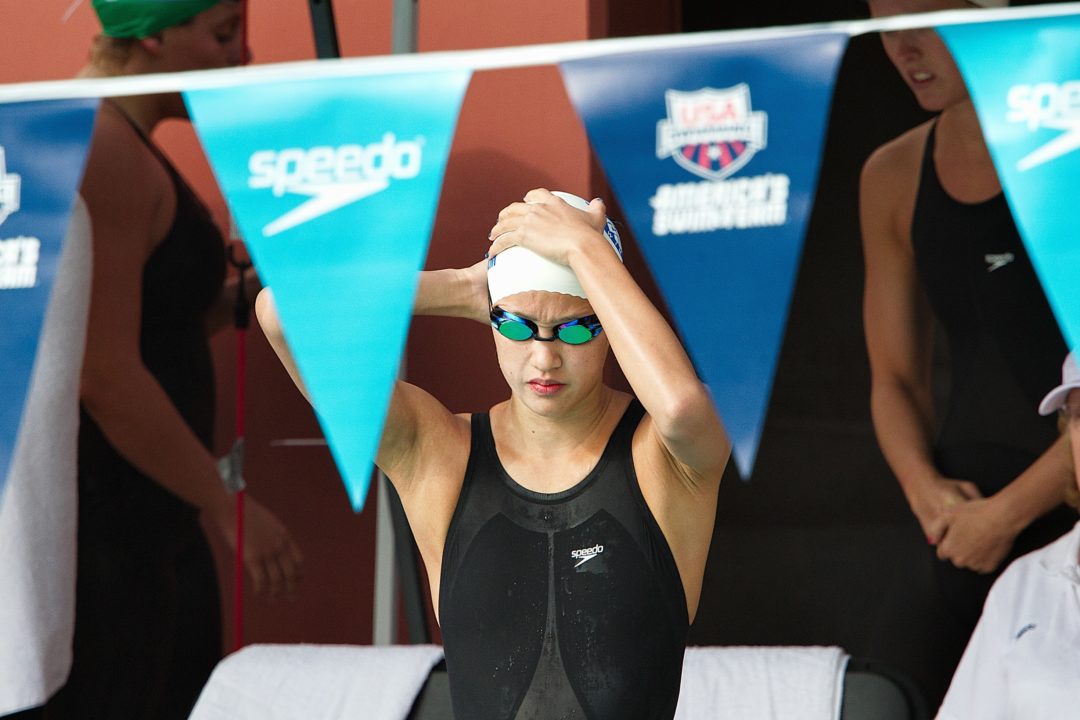 NCAP's Janet Hu, the #2 recruit in the class of 2014, has verbally committed to Stanford. (Photo: Tim Binning/TheSwimPictures.com)

To announce commitments, email us at [email protected]

Nation’s Capital Swim Club senior Janet Hu has become the first major female swimmer to commit in the class of 2014, as she verbally committed to Stanford according to collegeswimming.com’s recruiting database.

Even with the loaded classes of backstrokers coming out, a 52.0 in the 100 backstroke should put her in the top 8 as a freshman, as it should in the fly.

For head coach Greg Meehan, who took over the program prior to last season, this is his second huge recruit in as many years, as last fall he landed a commitment from Olympian Lia Neal, who is arguably the #2 recruit in her class as well. The year before that, Maddy Schaefer was probably the class’ top sprinter. That’s three straight years of getting the #1 or #2 sprinter in the class, which means that Stanford’s sprint free relays that were 4th and 5th at NCAA’s in 2013 could be even better for the next half-a-decade.

Though recruits cannot sign until later in the fall, July 1st is the first day that coaches are allowed to call recruits on a regular basis and discuss scholarships, so this should be the beginning of a rush on commitments. Last year, we saw an unusually early verbal commitment season, and between Hu and Paul Powers (already committed to Michigan) it would seem as though things are going to get even earlier this year.

Congratulations to Janet. Great get for Stanford.

We know Greg is happy! She will be of huge value to Stanford, on relay and individually. Their 200 Free relay is going to be deadly!!

Gotta keep up with their bay area rival I assume…

actually, just trying to keep pace with the rest of the Stanford athletic department…

Did anyone see the press release about trading their Twitter handle SUAthletics to Syracuse for a basket of oranges?

I thought that was pretty funny….

Nice! Their relay presence will be phenominal in the next couple years; she will most likely swim all 5. I hope Stanford gets a few more big names as well as depth, Greg definitely has shown that he can develop stars!!

If she’s on 5 relays, then she only swims 2 individual events. I don’t see that happening.

Huge recruit for Stanford! I had said yesterday that if I was a college coach I would recruit Janet Hu. She’s a beast in yards and is so versatile. Stanford’s relays are very strong now.

This is great news! Congrats to Greg ( and Tracy). I love Stanford getting the quiet names while Cal gets the distracting big name. Could make for a very interesting dual especially w/ Cal still ignoring their breaststroke hole. Sarah Hasse will exploit that weakness.

i’ve read that Teri wants to explore working on Missy’s breast. could be some untapped potential there, you never know.

but getting back to reality, yeah, Janet will be a major major asset to Greg & co – congrats to all!

Yes, I remember Missy used to be one of the top age group breaststrokers a few years ago… this is an interesting concept. Too bad it’s only a 2 year gig…. I don’t like that part of it, wish she’d stay the whole time, but can’t blame her. I still think it could be a distraction to an already cohesive group. Just my dumb opinion

I sort of agree, the media is going to create a lot of challenges for the other girls… maybe they’ll like the extra attention that Missy brings. I think Cal wins next two years even w/o a breaststroker.

Yeah, there’s a reason Missy Franklin is the biggest, most distracting name…

They haven’t been ignoring their breastroke; there just haven’t been many distinguished breastrokers coming out of high school recently, and the ones Cal did get haven’t developed.

It does appear to be neglected when you see that Auburn had 4 girls go under a minute this year…. just saying.

Auburn = 13th at NCAA’s… they have bigger issues to contend with.

Who else is on their short list for 2014? I’m loving Stanford’s team right now especially with Maya just killing it at Worlds. Where is Stanford weak? Not seeing any except for depth perhaps. Exciting!

I think the Cardinal needs some mid-D/D swimmers. Perhaps there are a couple of those on their short list. Someone for the 200 FR/500 FR/mile/800 FR relay.