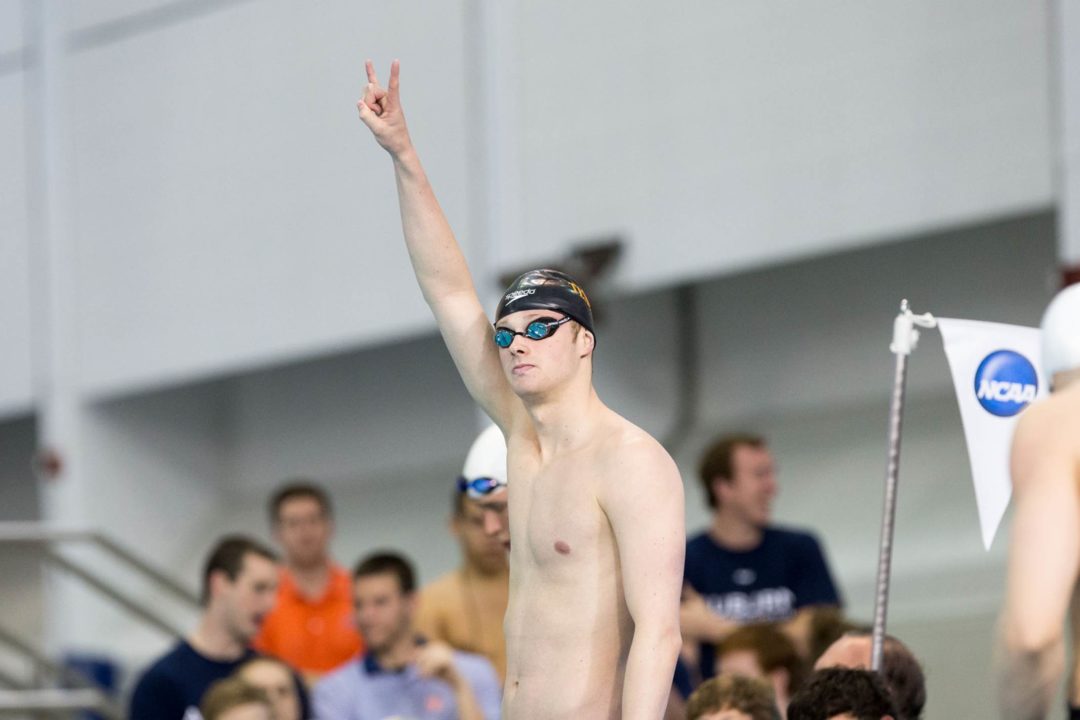 The first day of the Big 12 Swimming and Diving Championships started off with a time trial session this morning.... Archive photo via Tim Binning/TheSwimPictures.com

The first day of the Big 12 Swimming and Diving Championships started off with a time trial session this morning. The 2015 Big 12 conference championships are being hosted at the University of Texas from Feb 25th to 28th. The University of Texas’s men’s program has never lost a Big 12 Conference Championship since the formation of the conference 18 years ago. The women’s team from Texas also won last year, giving the Longhorns their 12th Big 12 Conference Title.

Despite Texas coach Eddie Reese not entering Jack Conger in the 200 butterfly at the Big 12 championships, Conger did go for a time this morning in a time trial. SwimSwam’s Gold Medal Mel Stewart was on deck to witness his swim.

Coach Eddie Reese told us, “Jack said he felt he could get the 200 fly record last week… Jack is unshaven. He does need more rest, but we’re happy with where he is at right now. At the Pro Swim Series Austin, when he went the 51.6 100m fly, we knew his 200 fly would be on. Jack time trialed the 200 fly because he’s not swimming it at Big 12’s. NCAA’s…? We have some choices to make, because Jack can swim anything.”

Jack Conger broke the American and US Open record with his time of 1:39.31. He took out his first 100 in 47.32 and brought it home in 51.99 for the new record. Dylan Bosch’s time from last year of 1:39.33 will still remain as the NCAA record, because NCAA rules forbid records being set in time-trials.

The old American Record was held by a tie between Tom Shields and Michael Phelps, who swam matchin 1:39.65’s.

Live results can be found by clicking here.

Post race quotes from Conger: “After going a 1:41 in practice, I felt this was an achievable goal.”

On not swimming the 200 fly at Big 12’s: “I’m focused on the 200 back here… looking forward to that race, and seeing my teammates swim fast.”

On training: “I’m not shaven, but I rested some. I’ll be doing some more work after conference, then getting a full rest for NCAA’s.”

On 200 fly at NCAA’s?: “After conference we’ll get with the coaches and see what works for NCAA’s. My schedule isn’t set yet.”

Below is a list of the fastest SCY 200 butterflies in history as of today.

In January, Conger posted an incredible in-season time at a dual meet against SMU and Arizona. His time of 1:40.34 broke the Texas school record and was the fastest NCAA time of the year leading into the Championship season.

That January swim gave the Longhorns the three fastest 200 butterfliers in the country this season. The top 5 at the time was:

His January swim was also the 5th-best time in the 200 yard fly in NCAA history, and made him the 4th-best performer.

Jack Conger now holds the NCAA record in the event as well, beating out Bosch’s time from last year by .02 seconds. The top 6 all-time performances in NCAA history are below

Other times from the Time Trial sessions

I wasn’t ready for this today

Amazing. If he holds a more even pacing he should be able to go under 1:39 too.

Jack can be demonstrative.