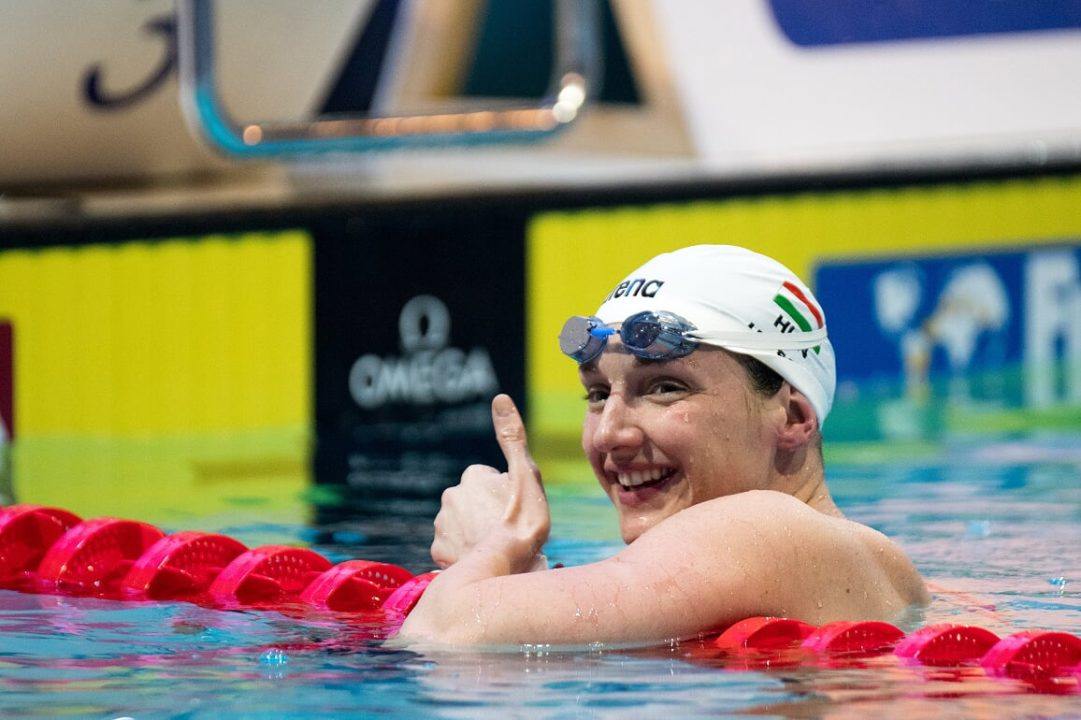 Hungary's Iron Lady certainly earned that title on day 3 of the National Championships in Debrecen, as the multiple Olympic gold medalist was in the water 5 times during the morning session. Archive photo via Kevin Reust

Hungary’s Iron Lady certainly earned that title on day 3 of the National Championships in Debrecen, as the multiple Olympic gold medalist was in the water 5 times during the morning session.

The 29-year-old dynamo first participated in two relay prelims representing Iron Swim Budapest, where she notched a 4x100m mixed medley backstroke split of 1:01.12, then later a 54.91 anchor on the women’s 4x100m freestyle relay. Both squads made the finals for tonight.

Individually, Hosszu slid into the 200m backstroke final, clocking a modest 2:16.97 for the 7th seed. She’s already been as fast as 2:09.77 last week in Marseille, so Hosszu should be several seconds faster come tonight’s final, if she indeed swims the race.

Leading the women’s 200m back is Katalin Burian, who scored the top time in 2:11.79. Burian is the reining European Championships bronze medalist in this event, having earned 3rd place in Glasgow with a mark of 2:07.43. She’s already put up a sub-2:10 mark this season in 2:09.92 from FFN Golden Tour Nice, which represents the 6th fastest time in the world this season.

Hosszu also took on the women’s 200m breaststroke, where she notched the 2nd fastest time of the morning in 2:34.75.

In the pole position is Eszter Bekesi, who scored a morning effort of 2:34.13. This 16-year-old finished 11th in Helsinki at the European Junior Championships last year, clocking 2:30.17.

The final swim for Hosszu this morning came in the grueling 400m IM event, where the Olympic champion powered her way to a mark of 4:43.33, a super solid outing considering it was her final swim after multiple events on the morning.