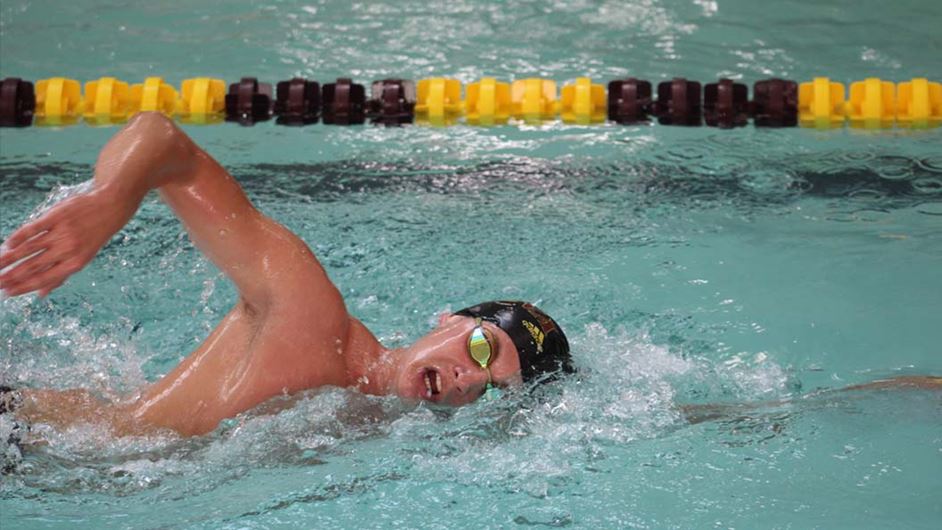 The Iona College women raced to a win in the day's last event to edge visiting St. Francis Brooklyn, 152-139, while the men cruised to a 183-78 decision. Current photo via Iona Athletics

Walsh won four individual events and was part of two relay wins in UVa’s dual wins over North Carolina and NC State over the weekend.

NEW ROCHELLE, NY – In an afternoon highlighted by back and forth finishes, the Iona College women’s swimming and diving team raced to a win in the day’s last event to edge visiting St. Francis Brooklyn, 152-139. The Iona men had an easier time, winning 183-78. Both teams are now 2-0 on the season.

With a four-point lead going to the day’s final race – the 400-yard freestyle relay – the Iona quartet of Katherine Lee, Samantha Whitney, Lily Devaney and Isabella Nicholson posted a 3:41.00 clocking to win by 3.6 seconds to seal the victory.

“I didn’t know what to expect in the relay,” commented Coach Nick Cavataro, “The St. Francis coaches looked like they were adjusting their lineup every race and we just held firm and got great efforts out of all four ladies today.”

“We had 16 women score individual points today and that was the key to winning today, contributions up and down the roster.”

“Michael is swimming very well right now,” commented Cavataro. “He wants to be faster in every race than the last time; but, today was about evaluating the collective three individual races and being able to go back-to-back in the 1000-Free and 200-Free, which is a sign of good physical conditioning and mental toughness. To go 1:41 is a great step to being ready in February.”

“I can’t say enough about the energy Moran and Mullin bring to the men’s team. They drive everyone to compete at a higher level. It is the same with our two women graduate students, Isabelle Pabon and Kate DiRaimo who are leaders every day in practice, on deck and in the race.”, commented Cavataro.

The Gaels jump right back into the pool Saturday, October 16, as they host Sacred Heart University and Wagner College at the Hynes Pool with diving at 7:45 am and swimming at 11:30 am.
Courtesy: St. Francis Brooklyn Athletics
New Rochelle, NY – The SFC Men’s and Women’s Swimming and Diving Teams traveled to Iona College for what has become an early season tradition to compete against the Gaels this past weekend.

The Terriers made the bus trip to New Rochelle NY for what has become an October tradition. The competition gives the student-athletes a chance to compete against a non-conference opponent and provides the coaches of both teams yet another chance to see their team’s strengths and weaknesses. Although both meets were won by the host team, most events were vigorously contested making for an exciting early season collegiate swim meet.

In the women’s meet the Iona Gaels prevailed by a narrow margin winning by a score of 152-132. Despite some nail biting finishes in several events throughout the meet, Iona was able to claim the win during the last race.

Mariajose Lopez was the stand out swimmer of the meet winning two individual events. In the 1000 freestyle the Terriers went 1-2-3. Mariajose posted a time of 10:37.78 for the first place finish followed Meliu Boulianna with a time of 11:03.35, edging out her teammate Laetitia Bouc who finished third with a time of 11:04.59. All swimmers were a model of consistency in the event maintaining exacting intervals throughout. In the other distance event, Mariajose was once again victorious, winning the 500 freestyle in a time of 5:15.17 besting her opponent by just 2 seconds.

Jenna Pearse finished the 200 freestyle in a season best of time 1:58.16 for a second place result.

In another close event finish Laetitia Bouc was beaten to the wall in the 100 fly by just two tenths of a second posting a time of 1:00.95 despite a gallant last lap push to the finish. Teammate Jenna Pearse touched for a third place finish in a time of 1:01.07.

In the 200 Individual Medley Kristy Nagtzaam posted a time of 2:14.57, good enough for a second place finish in that event.

Although the men’s meet was not as close as the women’s meet there were some noteworthy and exciting swims by the squad.

In the next event the 40 lap 1000 yard freestyle the terriers finished second and third with Robert Wagner posting a time of 10:12.63 and Elias Hysing finishing with a 10:32.29.

In the 200 freestyle the terriers recorded a third and fourth place finish.  Benedek Lendvai posting a season best 1:46.02 and Steven Dawkins touching the pads with a time of 1:51.16.

Daniel Matheus Santos came up short in the 100 Backstroke copping a second place finish with a very laudable time of 53.83.

Uros Canic and Luka Dmitrovic finished the 100 breaststroke event with times of 59.97 and 1:00.41 for a very splendid third and fourth place finish.

In the hotly contested 50 Yard free sprint, six tenths of a second separated places one through six.  St Francis swimmer Kamil Goleniec place third with a time of 22.34.

Daniel Matheus Santos sprinted to victory in the 100 yard freestyle in an impressive time of 47.05.  Also of note, James Yee posted a personal best of 1:00.81 in the event.

In the 200 Backstroke event, Robert Wagner posted a 1:57.69 good enough for a second place finish.

The next event the 500 freestyle, Benedek Lendvai posted a terrific early season time of 4:50.79 for the grueling 20 lap swim and a second place finish.

The next meet for the Men’s & Women’s Swim Terriers is a dual meet verses Northeast Conference rival Mount St Mary’s at the St. Francis College Aquatic Center on Friday, October 29th for a 1:00 PM start.